Paresh Patel, the CEO of HCI Group, Inc., the Florida headquartered property and casualty insurer and parent of Homeowners Choice Property & Casualty Insurance Company and insurtech TypTap, has said in an update after hurricane Ian that he expects HCI’s reinsurance tower to easily absorb the group’s claims from Ian.

Patel said that HCI Group has already received more than 10,000 claims after hurricane Ian, with another 2,000 or so still expected to be filed.

He laid out HCI’s feelings on hurricane Ian, highlighting that the company believes less of its policyholders suffered hurricane force winds during Ian, than they did with hurricane Irma in 2017.

“We can sustain a much greater loss than Ian has dealt to us, both from a capital position as a company and as a reinsurance capacity in the towers we conservatively bought back in May,” Patel said.

You can see HCI’s reinsurance towers below, including where Patel said the firm’s losses from Irma rose to. 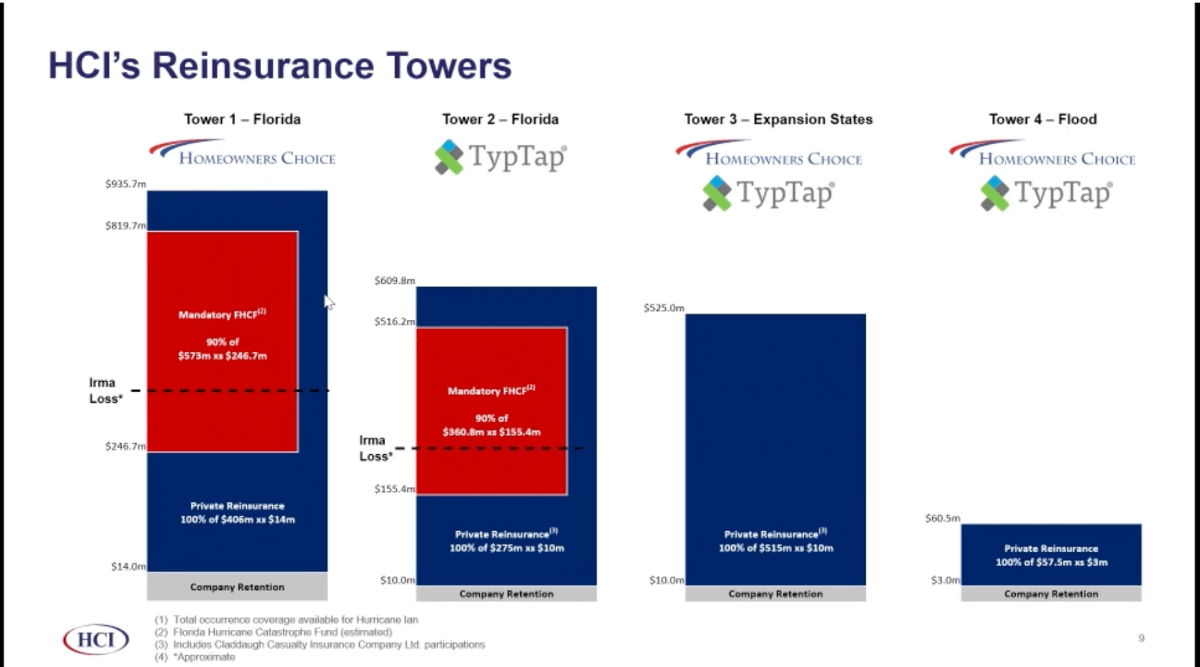 Patel also discussed the FHCF and said he sees no reason to be concerned that Ian could exhaust the cat fund, as has been discussed since the hurricane.

“While some carriers may exhaust their FHCF limits, others will hardly touch it at all and that capacity will be there to be utilised in 2023. So from what we can see, we think there will be a significant amount of FHCF dollars still left in 2023,” he explained.

Looking ahead to what 2023 might bring for reinsurance renewals for HCI and others, Patel said that as HCI did not participate in the Reinsurance to Assist Policyholders (RAP) fund this year, meaning that this extra state-backed reinsurance capacity is available to the carrier group at its next renewals at the mid-year of 2023.

Patel also commented on HCI Group’s reinsurance buying strategy, saying, “Long term traditional relationships matter. In all of HCI’s history, we have never bought ILW’s, cat bonds, or any of those products. We have dealt with traditional reinsurance partners and the reason for that is about to become apparent.

“When we have to renew next year, we know our partners will be there with us because we have a long-standing trading relationship.

“The price is something we will negotiate, but the relationships will be there. So this gives us confidence as to being able to look after our policyholders, not only in 2022, but in 2023 and beyond.”

Patel highlighted that adding up HCI’s retention, from its reinsurance and internal structures, as well as costs retained by its internal reinsurer Claddaugh, plus some reversal of accrued benefits, gives a total net loss from hurricane Ian of $78 million for the company, pre-tax, which is its maximum exposure and it seems is going to be hit with reinsurance absorbing the rest.

Just a few weeks ago, Patel had announced that HCI would expand further in Florida, launching new carriers dedicated to that market, seeing an opportunity in the dislocated environment that emerged after the renewals.

It seems likely this strategy might remain in focus for the company, given Florida will be in need of the additional capacity going forwards.