Hannover Re shrinks K-Cessions to $610m in “successful” retro renewal

German reinsurance firm Hannover Re has downsized its capital markets backed K-Cessions quota share retro reinsurance sidecar facility to $610 million for 2021, a roughly 10% decrease from the prior year.

At the same time the company expanded its aggregate and whole account excess of loss retrocession protections, but not enough to account for the entire shrinkage of the K-Cessions sidecar.

It’s possible that market conditions are a factor here and while retrocession costs have risen, which may have driven some of this restructuring of Hannover Re’s protections, it’s also likely that the reinsurers own appetite to retain a little more risk has increased at the same time.

A year ago, Hannover Re renewed the K-Cessions quota share sidecar at $680 million for 2020, which was the largest K-Cessions placement seen from the company.

K-Cessions is a key vehicle for Hannover Re, enabling it to partner with institutional and insurance-linked securities (ILS) capital within its retrocession program, sharing in its underwriting profits and losses.

The company had previously described K-Cessions as “the backbone of our retrocession program” in an interview with us.

K-Cessions has provided significant capital support to Hannover Re over the years, with investors taking their shares of its losses.

But in 2021, with market conditions and reinsurance rates much improved, it’s possible Hannover Re sees the cost of the protection as outweighed by the desire and its ability to retain more risk.

At $610 million for 2021, K-Cessions will still play a vital role in the Hannover Re retrocession tower, cementing the capital markets within its protections yet again.

Hannover Re’s 2021 retrocessional reinsurance arrangements can be seen in the diagram below: 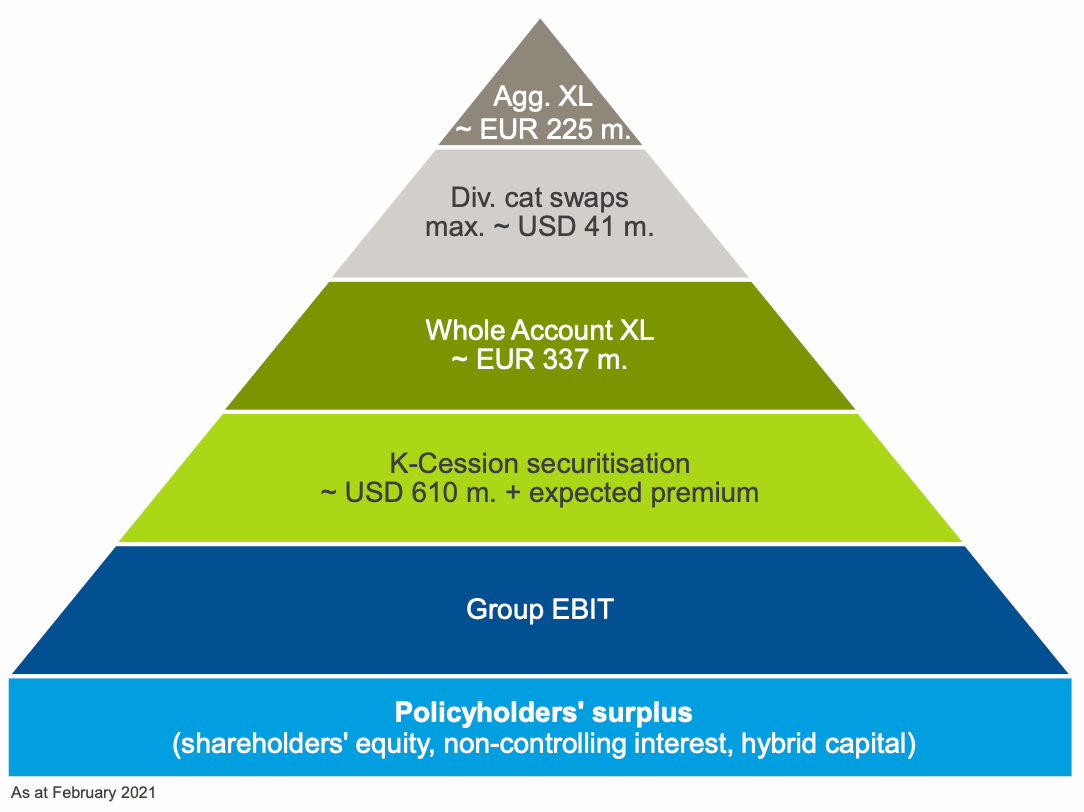 For 2021, Hannover Re has increased the size of its large loss aggregate excess-of-loss worldwide retro reinsurance arrangement, which was EUR 200 million in size for 2020, but has been renewed at EUR 225 million.

Last year, this aggregate retro layer was 80% funded by the capital markets. While no new figure is available for investors shares of the agg retro layer, it’s expected to be significant again.

Hannover Re has slightly less in the way of catastrophe swaps in its retro tower for 2021, at $41 million, down a little from 2020’s $42 million of cat swaps.

But the reinsurer has upsized its whole account excess of loss retrocession cover, taking it to EUR 337 million for 2021, up slightly from 2020’s EUR 325 million.

In 2020, 21% of the limit for the whole account retro cover was sourced from capital market investors. We don’t have the data on the 2021 program yet to understand whether the capital markets has an enlarged, or smaller share.

Hannover Re said its retrocession renewal for 2021 was successful, with retro capacity was available at reasonable prices enabling it to keep its net risk appetite at the targeted level.

Risk-adjusted pricing for its retro renewal was in-line with reinsurance pricing, the reinsurer said.

The retro renewal was “supported by long-term relationships,” Hannover Re said, aiding in the successful placement for 2021.