Reinsurance broker JLT Re has reported that its property catastrophe rate-on-line index for Florida saw an 8.5% decline at the June 2015 renewals, as year on year pricing pressure continued, although at a more moderated pace.

The 8.5% decline on the index, from 164 down to 150 points, is a far slower decline than seen for the previous two seasons, but the fourth consecutive year of Florida property catastrophe reinsurance rate declines in total. 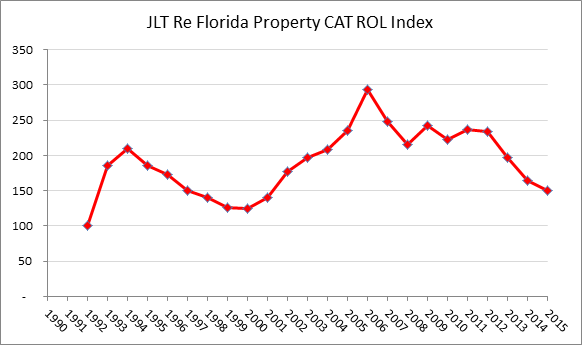 JLT Re’s view of reinsurance rates in Florida is aligned with other reports, which suggested a -5% to -10% rate decline on core property catastrophe reinsurance lines.

The brokers index chart, above, makes it clear that rates remain above the lows seen in the late 90’s, a key reason that participants in the market continue to insist that there is still margin in Florida property catastrophe business. That could suggest that the market has a little further to go to find the bottom.

“On an overall basis the general trend was a downward pricing movement across company programs. However the level of price reductions varied significantly by layer of coverage,” commented Bob Betz, who along with Brian O’Neill leads JLT Re’s National Catastrophe Practice.

“This was the fourth consecutive year of significant risk adjusted reinsurance rate decreases” added Brian O’Neill. Since 2012 the JLT Re Rate on Line Analysis is indicating a continued downward trend albeit the rate of decrease slowed in 2015.”

“Interestingly, this is also the first year where companies took advantage of traditional open market reinsurance capacity and pricing and reduced their purchase from the Florida Hurricane Catastrophe Fund,” Betz concluded.