Florida’s residual market insurer, or insurer of last resort, Citizens Property Insurance Corporation, has now surpassed more than 1 million policies again, the first time it has been at this level of portfolio exposure, in terms of policy count, since 2013.

In fact, it seems Florida Citizens run-rate of policy assumption is moving quite a bit faster than the insurer had previously forecast.

As we reported earlier this year, Florida Citizens had added on average 32,000 new policies to its portfolios every month through 2021.

The rate of assumption has been increasing in recent weeks, with Citizens now looking set to eclipse the forecast it had provided earlier this year.

Citizens had originally made a projection for the end of 2022 that suggested it would reach almost 1.1 million policies in-force by year-end.

The chart below shows that projection in detail, with the almost 1.1 million policy forecast: 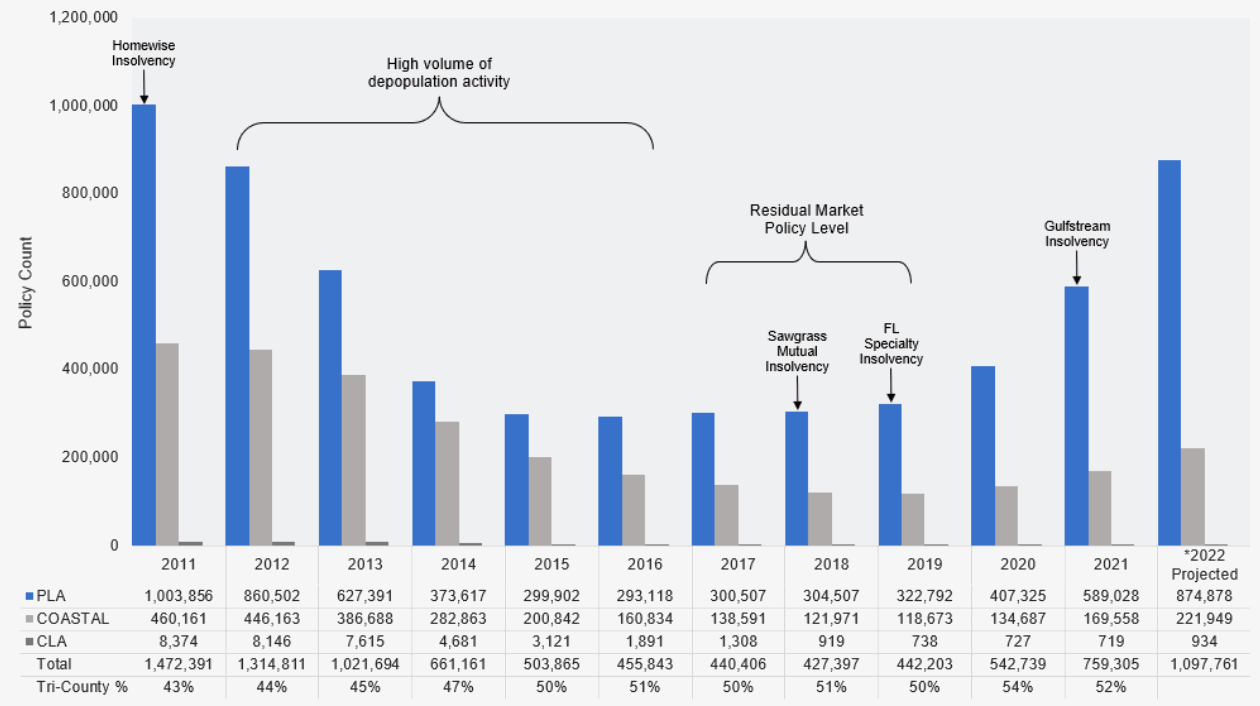 But Citizens is already well on the way to that figure, having now surpassed 1 million policies again, reaching 1,000,624 as of August 5th 2022.

We’ve plotted that figure into the Florida Citizens policy count since the end of Jan 2021 in the chart below and it’s clear that the rate of policy assumption is now rising again. 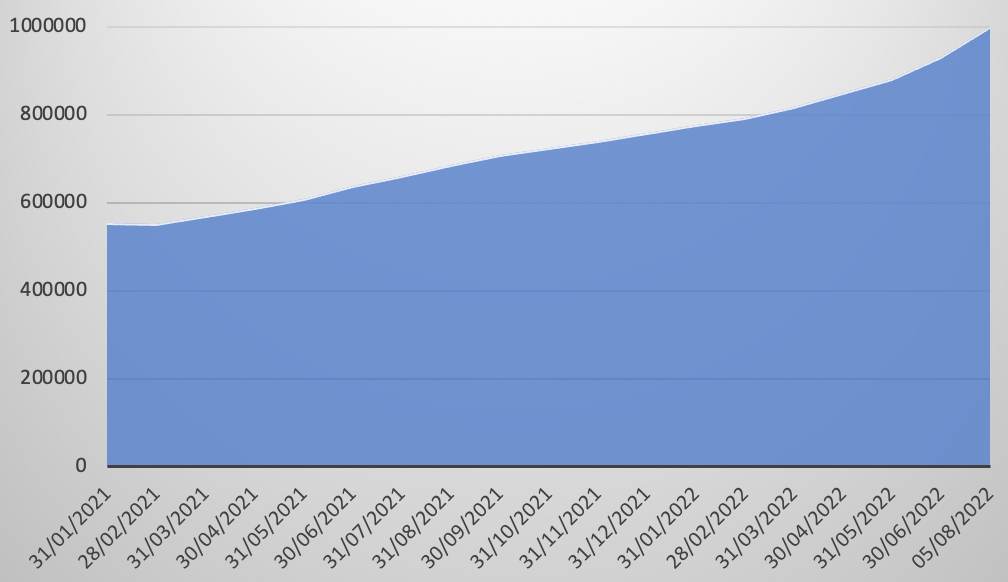 With another property insurer now heading for insolvency and all its policies set to be cancelled in September, in Weston, it seems likely the assumption rate at Citizens will continue to increase.

Also elevating the rate in recent weeks will have been the fact so many carriers have stopped writing new policies in Florida at this time, meaning the residual market can find itself the home to an increasing number of policyholders that cannot afford private market alternatives, we imagine.

It appears there is a reasonable chance that Florida Citizens surpasses the 1.1 million policies it forecast it would have in its portfolios by year-end.

Citizens CEO Barry Gilway did up the target to 1.2 million a month ago in comments to the insurers Board. That now seems prescient and necessary, as the carrier needs to plan for increasing growth it seems at this time.

Gilway had also said that a reasonable forecast might be for Citizens to have 1.55 million policies by the end of 2023, while a worst-case scenario in charts seen by Artemis suggested that could have reached 1.9 million if Florida’s property insurance market situation isn’t stabilised.

Florida Citizens will be in a challenging position, with reinsurance pricing so high that it was unable to buy the cover it wanted at the recent renewals and the catastrophe bond market not offering it much solace, or capacity, either.

Just because Citizens is growing fast isn’t going to make its reinsurance costs any more manageable.

The only things that will achieve that for the insurer, are either a downsizing of risk, especially in peak coastal areas and in lower-quality stock property, or if Florida resolves its property insurance litigation crisis and so regains the confidence of global reinsurance and capital markets.

Right now, neither of those seem very likely, at least at any speed.

Downsizing Citizens, through a new depopulation program, is unlikely until the litigation issue is resolved, as it will require capacity to support it and also investor interest.

Meanwhile, the litigation is so far not being reduced by recent legislative reforms and the expectation is that will take time to benefit the market.

While global reinsurance firms and catastrophe bond investors are also dealing with frequency, severity and climate related disasters, on top of inflation, which are hardening their pricing everywhere at this time.

Plus Citizens now has a potential additional burden of acting as a backstop for failing insurer’s claims.

All of which suggests that Florida Citizens will grow, perhaps increasingly rapidly, swelling its exposure but with an inability to shed it, or protect it using reinsurance and capital market risk transfer.

How many policies Citizens holds in a year’s time is anyone’s guess at this stage, but it may be enough to take it back to a new record size, its previous record having been just over 1.472 million.