Florida’s Citizens Property Insurance Corporation is budgeting for a slightly harder reinsurance market in 2018, expecting to increase its risk transfer spend by approximately $7.3 million or 8%, but aiming to increase the amount of coverage it buys to $1.45 billion.

In a governing board document on the 2018 budget, Florida Citizens lays out its expectations and plans for reinsurance and risk transfer for the year ahead.

Citizens will aim to “protect surplus through prudent and measured risk transfer efforts in 2018” the insurer said.

But it notes that market conditions are changing, saying, “While Citizens has enjoyed the relative favorable pricing within the market over the last several years, a hardening market is anticipated as a result of not only Hurricane Irma, but other catastrophes around the globe.”

The results of the hardening reinsurance market is likely to be an increased cost for its risk transfer, Citizens believes, adding, “The impact of these events are anticipated to apply a modest level of upward pressure on pricing for 2018 renewals, leading to an overall net increase in budgeted reinsurance costs.”

The increase in costs is still expected despite the fact that exposures in the Florida Citizens Coastal Account have decreased this year, as a result of ongoing depopulation efforts and policies being shifted to the private markets.

Florida Citizens aims to buy $1.45 billion of risk transfer and reinsurance for 2018, up from the $1.33 billion purchased in 2017, likely from a mix of traditional and collateralized or capital markets providers.

The insurer said that, “The 2018 budget includes a provision for $100 million of private-risk transfer within the Coastal Account, marking an increase of approximately $7.3 million or 8% as compared to 2017.”

That implies a very slight, single-digit rate increase, which is hardly a true market hardening it would appear.

Of course it’s difficult to compare properly as we do not have the planned attachment points etc, but on a cost per unit of risk transfer basis the increase seems slight at first analysis.

The chart below from Florida Citizens reflects the fact the rate-on-line is not anticipated to change significantly for 2018, although a slight firming of reinsurance prices appears to be expected by the insurer. 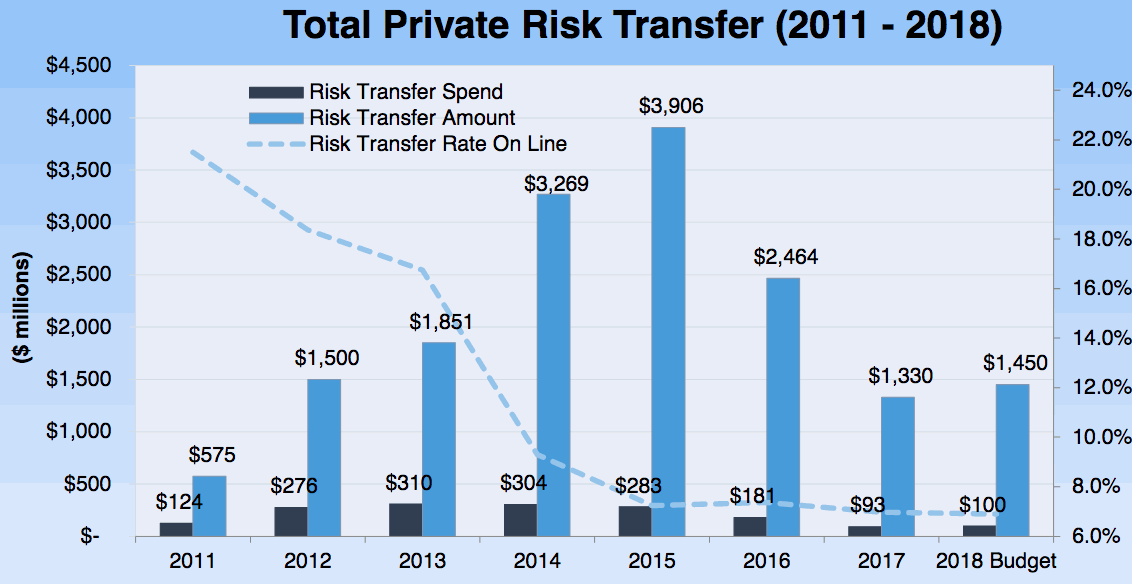 Florida Citizens reinsurance renewal is typically at the mid-year, so the insurer will have some time to assess reinsurance and ILS market conditions before making decisions about how much of its risk transfer could be sourced from ILS investors and the capital markets.