Global economic and insurance industry losses from natural catastrophes in the first-half of 2017 have both come in way below average, with just $19.5 billion hitting re/insurers which is significantly below the $29 billion ten-year average, according to data from reinsurance firm Munich Re. 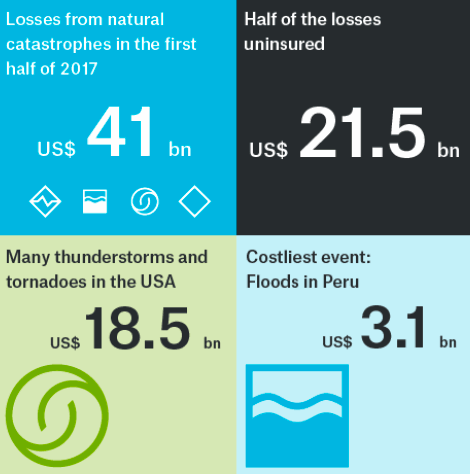 Munich Re has released its latest view of global natural catastrophe loss events and how they have affected the insurance and reinsurance industry today, highlighting that loss levels remain far below average expectations, which will only serve to maintain the pressure on all important reinsurance pricing as industry levels of capital will remain high.

Overall economic losses caused by natural catastrophes in the first-half of 2017 came to $41 billion, which is significantly below the $111 billion suffered in H1 2016 and also the ten-year average of $102 billion.

The total loss suffered by insurance and reinsurance capital is estimated as $19.5 billion, by Munich Re, again well below the $32 billion from H1 2016 and the ten-year average of $29 billion.

Given the major driver of insured loss during the first-half of this year has been U.S. severe thunderstorms and severe convective weather, a higher proportion of the economic loss was covered by insurance than is usually seen.

In fact, more than half of the total loss has fallen to the insurance and reinsurance industry as the U.S drove the economic impact in H1 2017, compared to over two-third being uninsured in the previous year and the average.

A U.S. thunderstorm in May was the largest single insured loss event of the first-half of the year, with insurance and reinsurance markets paying for $1.8 billion of a $2.2 billion loss event.

Munich Re Board member Torsten Jeworrek commented; “The exceptional accumulation of severe thunderstorms in the USA highlights just how important it is for insurers to have in-depth knowledge of natural catastrophes and how these are affected by climatic changes. This is true of both natural climatic changes and those that are man-made. Insurers not only help to overcome losses, they also improve our understanding of what triggers them. This is a fundamental basis for preventing future losses.”

Peter Höppe, Head of Munich Re’s Geo Risks Research added; “The unusual atmospheric conditions in the USA in the first half of 2017 provided the perfect conditions for powerful supercell thunderstorms, which frequently bring major hailstorms and tornadoes. The number of tornadoes observed in the first quarter of 2017 was twice as high as the average for the last ten years.”

U.S. severe thunderstorm events were responsible for three of the five costliest loss events around the globe in the first half of 2017, with each event causing economic losses of over US$ 2bn. The total economic loss from these storms reached US$ 18.5 billion, of which US$ 13.5 billion was insured.

Tony Kuczinski, President and CEO of Munich Reinsurance America, Inc, said; “During the first half of 2017, we continued to clearly see the impacts of tornado and hail events in the United States in terms of damage to homes and business, which ultimately result in direct and indirect losses to the economy. Munich Re continues to participate in important research being conducted to improve the way we build our homes and businesses, with the ultimate goal to make them more resistant to the impacts of weather related events. Preventative measures can reduce vulnerability, and preparing for loss or damage can increase resilience. These measures protect assets and save lives.”

The level of insurance and reinsurance industry losses has been particularly low around the globe, while U.S. losses from the severe thunderstorm peril are closer to the average. Hence the insurance industries share is higher than is sometimes seen, but at a below average level due to the relatively benign level of global losses from natural disaster events.

At a time when global reinsurance capacity continues to climb to new record highs, the levels of loss revealed in Munich Re’s estimates will not provide any hope of eroding the surplus that is impacting the sectors ability to harden pricing. 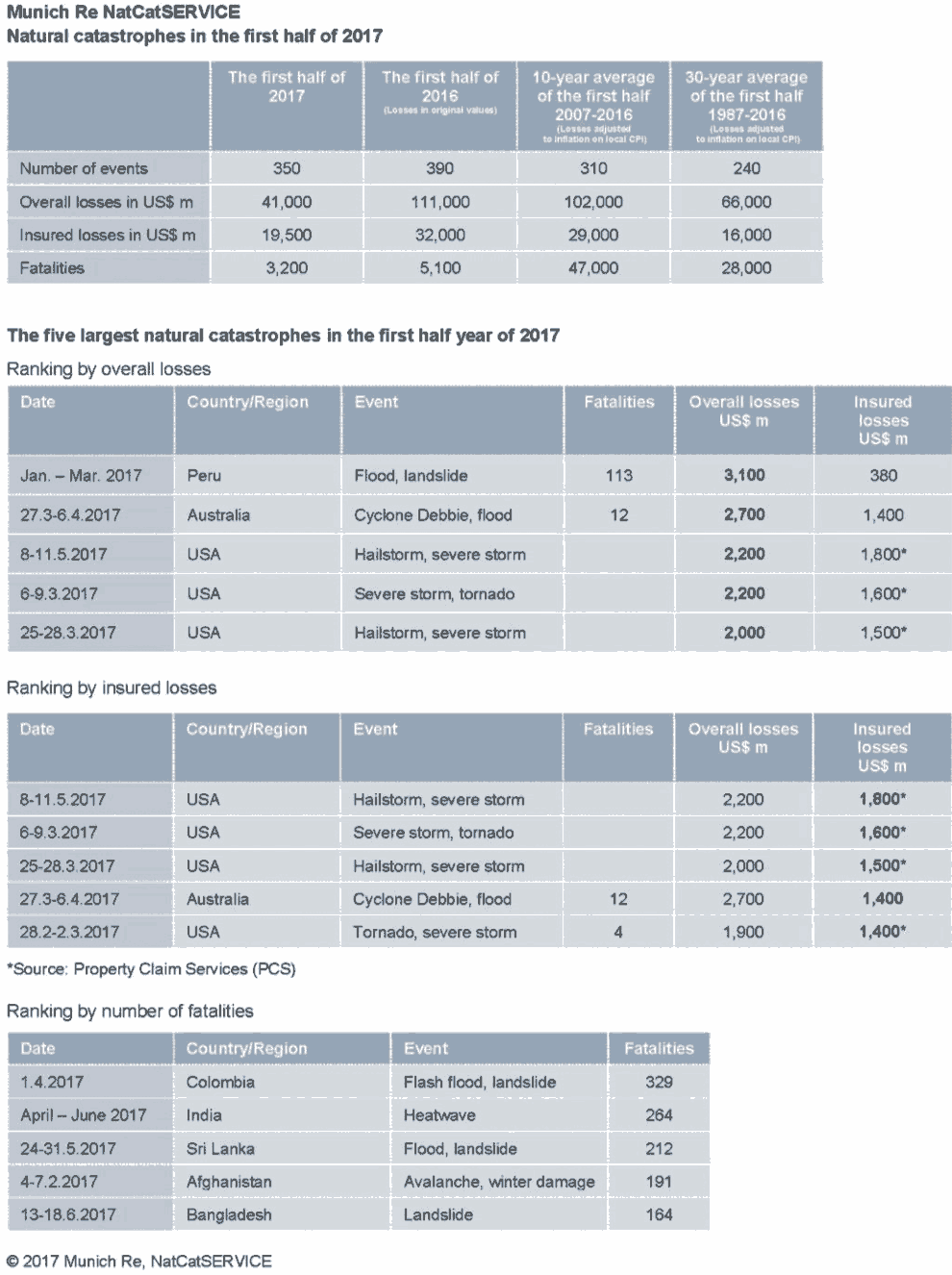