Alternative reinsurance capital grew 6% to $86 billion by the end of Q1 2017 and its resurgence prior to the mid-year June and July 2017 renewals has been a benefit to buyers of protection, helping them secure additional cost-savings and coverage enhancements, according to broker Aon Benfield.

At the end of 2016 alternative reinsurance capital, from insurance-linked securities (ILS) such as catastrophe bonds, collateralized reinsurance, industry loss warranties (ILW’s) and sidecars had seen steady growth to reach $81 billion.

The growth rate has accelerated somewhat through the first-quarter of 2017, rising by 6% in just one quarter to hit $86 billion at the end of the second-quarter.

Keep in mind that these figures from Aon Benfield do not include the record levels of cat bond issuance seen in Q2 2017, or the last-minute capital raising seen at some ILS funds for the mid-year 2017 renewals, so we believe the figure is likely nearer (or above) $90 billion by now. 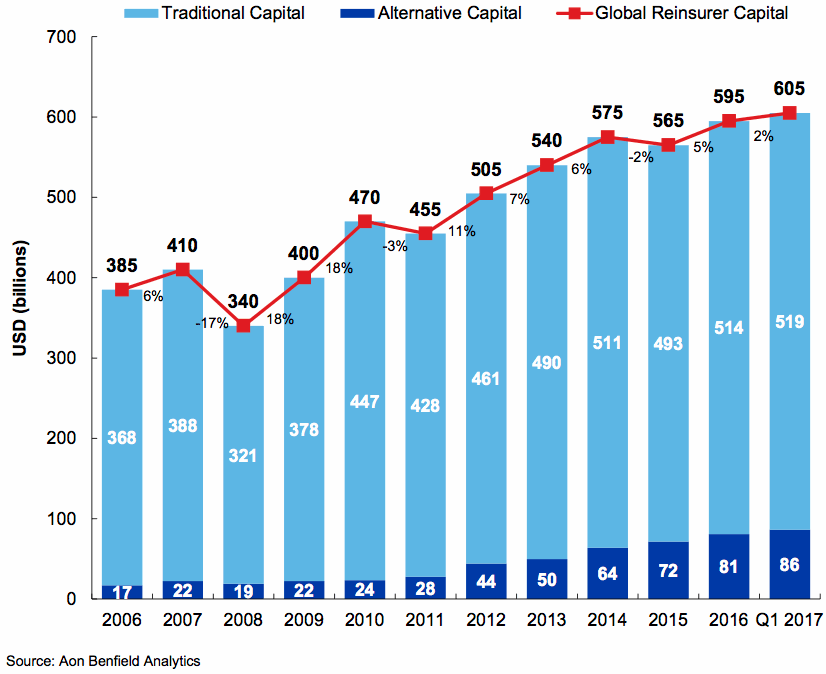 Aon Benfield explains in the report that demand remained relatively stable but the increase in global reinsurance capital has benefitted buyers of protection, with excess supply dominating the market helping buyers achieve cost-savings or coverage enhancements.

Additionally, Aon Benfield notes that there has been an increasing search for more sophisticated capacity in recent months, which is interesting as this suggests it has been met by the alternative market as well as traditional, as evidenced by the fact ILS capacity has been able to grow so much.

Of course the fact alternative capital has outpaced traditional also shows that its efficiency is increasingly being realised and buyers are recognising that leveraging alternative capacity can help them to optimise their own returns.

The effects of “heightened competition” from alternative capital players has meant that reinsurance pricing stayed under pressure in most classes of business at renewals, Aon Benfield explains.

Record catastrophe bond issuance as well as renewed and strong competition from ILS funds at the renewals, offering increased collateralized capacity and enhanced terms relative to previous years, has all helped sponsors of cat bonds and buyers of collateralized coverage to benefit from competitively priced and structured layers of protection from the alternative market.

Additionally, Aon Benfield notes a recent risk model vendor update has helped by lowering expected losses on natural catastrophe risk, which combined with the glut of capital and appetite from both traditional and alternative markets has resulted in a an “intensification of competition” particularly in the Florida market.

The end-result is a market increasingly awash with capital and capacity, of course, with alternative capital likely to have now passed the $90 billion mark, an assumption we make based on Aon’s $86bn at end of Q1 2017 plus taking into account all the record ILS and cat bond activity seen in Q2 and also the ILS fund cash glut that has been discussed.

This suggests a market where ILS and alternative capital is more competitive once again, which means with the added pressure of too much traditional capital that reinsurers are struggling to put to work that pressure on pricing and rates is likely to persist, perhaps right through into 2018 if the market remains free of major losses.

Read about the record levels of catastrophe bond issuance witnessed so far in 2017 in our quarterly market reports.