This weeks devastating explosion in the port area of Beirut, the capital of Lebanon, is expected to cost the country as much as US $15 billion, according to an early estimate by officials.

The Governor of Beirut had originally said he expected the costs of the blast to be around US $5 billion, but just a day later that increased to a range of US $10 billion to $15 billion and the economic impacts likely have further to run given the scale of the disaster and its tragic humanitarian impacts.

With at least 137 dead at the latest count, dozens still missing and over 5,000 injured by Tuesday’s enormous explosion, while estimates suggest well over 100,000 could have been made homeless, or had their homes severely damaged in the blast, the costs to the country of Lebanon are severe.

In fact, Beirut’s governor Marwan Aboud told the BBC that as many as 300,000 people could have been left homeless by the explosion, which occurred on Tuesday evening in the port area of the city.

The explosion is assumed caused by a store of explosive chemicals at the port, which had been recovered from a ship a few years ago. The blast destroyed the immediate area, many of the buildings in the dock area and damaged properties for kilometres around, while the blast was felt widely across the country.

Analysts have said that the impact to the insurance and reinsurance industry remains particularly uncertain, given the generally low penetration rate of personal lines policies in a country beset by financial and political turmoil.

A.M. Best said that property insurance in particular is particularly low, in terms of penetration rate, in Lebanon.

But property is a growing line of business in the Lebanese domestic insurance market, as A.M. Best explained.

“Property insurance has been a growing line – accounting for 6% of total GWP in 2018 – as insurers have leveraged their relationships with policyholders to offset weaker performing motor business by cross-selling more profitable products. Given the extent of the damage in one of the busiest, wealthiest areas of the country, AM Best recognises the incident will weigh on Lebanon’s already challenged insurance sector,” the rating agency said.

For the international market it is the commercial exposures that will drive any losses.

A.M. Best said that, “Marine and property lines of business are expected to be impacted.”

Adding that, “Some observers are drawing comparisons with the 2015 explosion in the Chinese port of Tianjin, which highlighted accumulation exposures in ports for international insurers and reinsurers, and caused extensive losses for major global carriers.”

Sources in the market have mentioned accumulation risk in conversations over the last day, with most saying not to expect a particularly significant market loss for insurance and reinsurance carriers, with some believing that there is the potential for the eventual industry loss to reach into the low billions of US dollars.

There’s an expectation of some marine cargo losses, with a number of ships having been in the harbour area at the time of the explosion as well. Although we understand the value of these vessels isn’t expected to be particularly significant.

Yesterday, Sven Althoff, Hannover Re’s Member of the Executive Board responsible for P&C reinsurance, commented on the disaster in Beirut and said he believes it will become a major loss event.

Althoff said, “First and foremost, we’re very sorry to see this tragedy happen yesterday. It’s very, very early days. We don’t have an overview when it comes to loss of life or loss of property at this stage. Of course, the impact for the infrastructure will be massive. But, from an insured point of view, it’s too early to say what the penetration of insurance in that particular area is.

“Given that it’s a harbor, industrial-type area, we have to assume that there is a good level of penetration here. So from that point of view, I guess you will see this on our major loss list in the third quarter.But I would have no feeling at this stage to what extent this will be a major loss.

“That it will be a major loss for us, I see as pretty certain. But whether it’s a low double-digit or high double-digit or even 3-digit number, it would be impossible for me to comment right now.”

There, Althoff is referring to Hannover Re’s own loss from the event.

Munich Re’s CFO Christoph Jurecka also said today that his company expects “Our assumption is that this is clearly a large loss, our threshold for which is above EUR 10m. But it’s too early to say how high.”

Sources in the London market suggest there will be impacts to marine and property accounts on the direct and facultative side, while global reinsurance firms are expecting to take their share.

Opinions seem mixed, with some saying the loss, while expected to be over US $500 million, is unlikely to reach $1 billion, but others suggesting it will be higher and in the low single-digit billions once all is tallied.

How significant the eventual industry loss is may also have some ramifications for the retrocession space, given these large risk loss events tend to be well protected against by the industry.

Whether any of this could leak to certain insurance-linked securities (ILS) funds remains to be seen, but there are certain  collateralised strategies that cover some marine, specialty and large risk property accounts on a retrocessional basis.

It’s useful to look at the scale of the damage and the BBC website (from Airbus Defence & Space) shows these two satellite images, a before and after, of the immediate port area of Beirut, really driving home the level and extent of destruction caused in the immediate area. 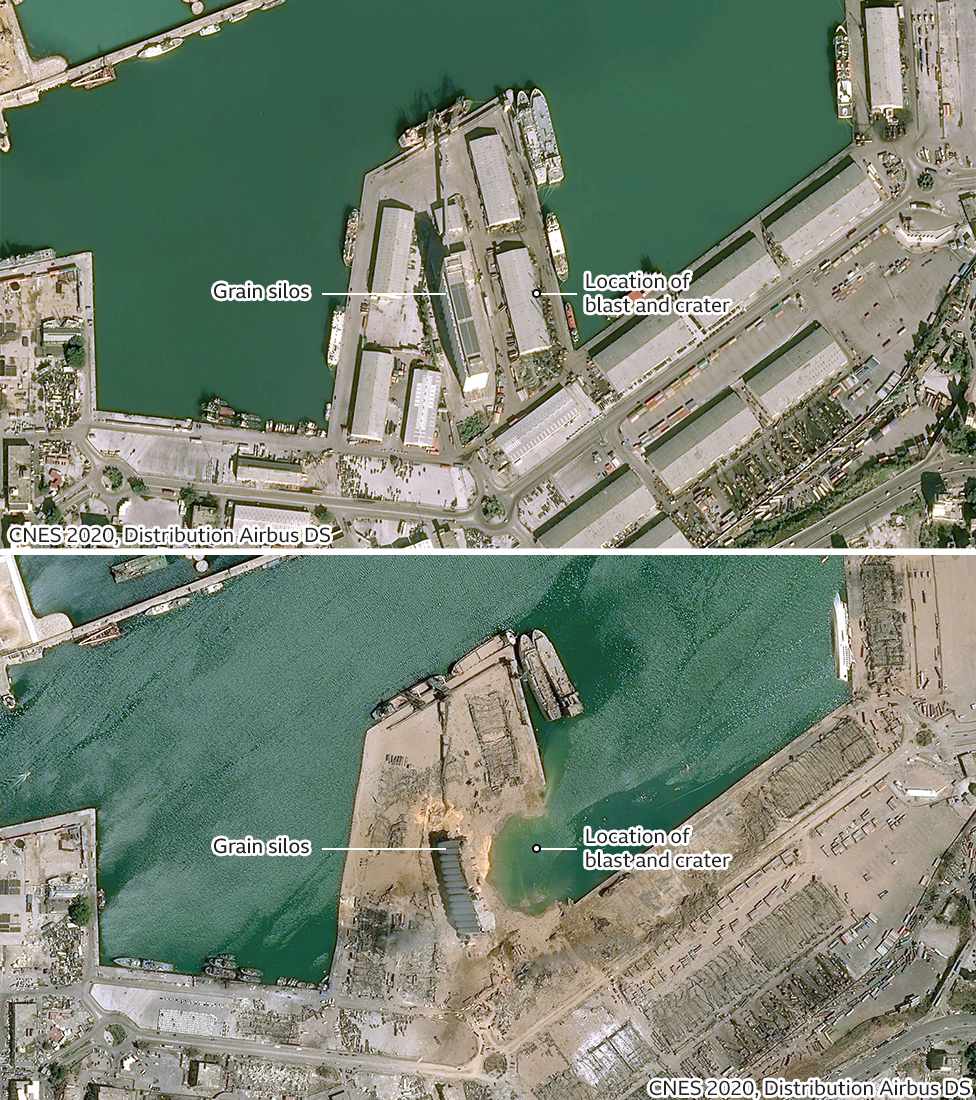 The extent of the damage shows that identifying where losses have been suffered should be relatively swift for the large commmercial and industrial facilities and buildings. But to calculate the entire insurance industry impact from the Beirut explosion will likely take some time, given the extent of the damage and wide area impacted.

A low billion U.S. dollar industry loss won’t be significant for anyone in the industry, with the local impacts to insurers likely the most detrimental to the re/insurance sector.

Overall though, the magnitude of the Beirut blast and the scale of the suffering and financial impacts caused, are likely to far overshadow any impact to the global insurance and reinsurance market, once again highlighting the need for greater penetration of insurance into poorer economies of the world.