Bermudian re/insurer Everest Re has continued to steadily expand its Mt. Logan Re Ltd. collateralized reinsurance sidecar like vehicle, adding a small amount to its assets under management during the third-quarter to reach $1.161 billion, but that is an impressive near 40% up on a year ago.

Mt. Logan Re’s assets under management shrank slightly after the impacts of Q3 2017 hurricanes and other catastrophe events, but the management team has been hard at work raising funds from investors ever since and the vehicle now stands 40% larger than a year ago.

Mt. Logan Re’s assets had shrunk to $833 million in the wake of last year’s third-quarter, but with losses being realised by now the firm has delivered strong growth of its collateralized reinsurance strategy ever since.

Mt. Logan Re is now 22% larger, in terms of its assets under management, than it was prior to the 2017 hurricane loss events, reflecting strong growth for the strategy as it provides an increasingly large chunk of supporting reinsurance underwriting capacity to Everest Re and we presume drives increasing fee income for the firm as well.

Helping to drive the ongoing growth at Mt. Logan Re is Everest Re’s access to reinsurance premiums, which continues to expand and the reinsurer reported underwriting 8% more in terms of gross premiums in Q3 than in the prior year.

Overall gross premiums reached $2.2 billion in Q3 2018, up 8% compared over the prior year. The worldwide reinsurance business segment experienced 7% growth to $1.7 billion, as it remains the core of the firms business.

Despite suffering $240 million of catastrophe losses during the third-quarter, Everest Re still reported third quarter 2018 net income of $205.6 million, considerably better than the net loss of $639.4 million it reported in the prior year.

Mt. Logan Re appears to have avoided too much impact from the Q3 catastrophe losses, as evidenced by the continuing growth. It stands to reason that the collateralized reinsurance strategy will have experienced some impact from the global catastrophe activity, but this hasn’t been sufficient to dent the asset pool it seems.

Commenting on the overall Everest Re performance for the quarter, President and Chief Executive Officer, Dominic J. Addesso said, “Everest generated an annualized, net income return on equity for the quarter of 10%, despite the previously announced catastrophe losses. The underlying results were quite strong with an attritional combined ratio of 85.8% year to date as a result of our diversified portfolio.”

As the Mt. Logan Re asset pool continues to expand, so to does the contribution that alternative reinsurance capital makes to Everest Re’s business, income and capital base.

At the same time, Mt. Logan Re’s remit has also been adjusting to suit the market, as evidenced by the vehicle entering into a retroactive casualty reserve reinsurance transaction with its parent recently.

With Mt. Logan Re contributing its $1.161 billion of third-party capital and Kilimanjaro Re catastrophe bonds another $2.9 billion, ILS structures and alternative sources of reinsurance capital now contribute over 31% of Everest Re’s $13 billion of capital.

That’s an impressive percentage and reflects the important role that efficient sources of third-party investor backed reinsurance capital play at companies such as Everest Re, an important role that is expanding and growing with every quarter and likely to continue to do so. 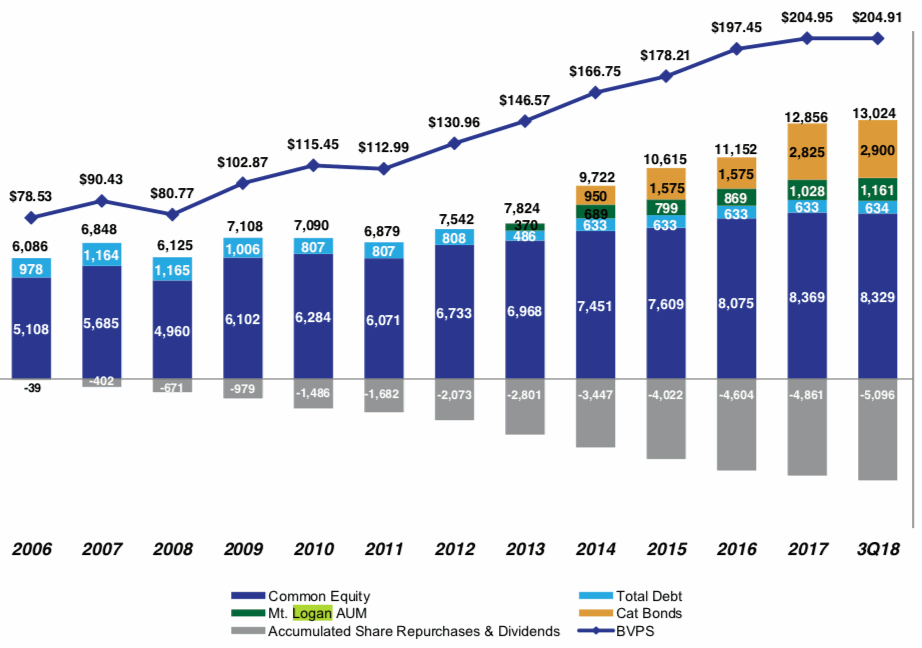