Everest Re saw its fully collateralized reinsurance sidecar and segregated accounts vehicle Mt. Logan Re shrink slightly during the second-quarter of 2019, but at the same time the reinsurer grew its shareholders equity significantly, taking its overall capital base to a new high of $13.4 billion.

Everest Re reported a strong second quarter of 2019, reporting impressive net income of $342.9 million, much better than the prior years $69.9 million.

Gross premiums rose 5% to $2.2 billion for Q2 2019, with reinsurance relatively flat but direct insurance premiums rising strongly by 17% in the quarter.

Helping profits and boosting returns, Everest Re managed a combined ratio of just 89.2% for the quarter, compared to 105.1% in the prior year period, thanks largely to the absence of catastrophe losses in the quarter and some favourable prior year development.

Investment income was also very strong, up 27% year-on-year, which is another factor in helping to deliver impressive returns on equity (RoE) and growth in terms of capital at Everest Re.

President and Chief Executive Officer Dominic J. Addesso commented on the results “Everest delivered outstanding results for the quarter, with a 16.1% annualized net income return on equity, driven by both solid underwriting and investment performance. With nearly $9 billion in common equity and strong franchises in both reinsurance and insurance, our ability to adjust the mix of business to optimize our portfolio was again evident this quarter, as Everest added top line in insurance and casualty reinsurance along with a strong property cat renewal to take advantage of the improved market conditions.”

Everest Re’s common equity now stands at an all-time high, as Adesso noted, which alongside the almost $3 billion of Kilimanjaro Re catastrophe bonds left outstanding and capital contributed by the Mt. Logan Re vehicle and outstanding debt, puts Everest Re with the largest capital base in its history at almost $13.4 billion.

Offsetting this was a slight shrinking of the Mt. Logan Re collateralized reinsurance vehicle, which has clearly been paying out some losses over the first-half of this year, as its assets under management has fallen to $940 million at the end of Q2, down from $1.046 billion at the end of 2018.

Partly this will be due to the realisation of losses after the last two year’s of catastrophe events, as well perhaps as some additional impacts from loss creep during the first-half of the year which may have trapped a little more capital.

It’s typical of the churn seen in the AuM’s of insurance-linked securities (ILS) fund managers and other third-party reinsurance capital vehicles during the period, as the hangover of prior year losses continues to be dealt with.

The third-party reinsurance and retrocessional capital provided by Everest Re’s Kilimanjaro Re catastrophe bonds and the slightly smaller Mt. Logan Re AuM still make up almost 29% of Everest’s overall capital base. 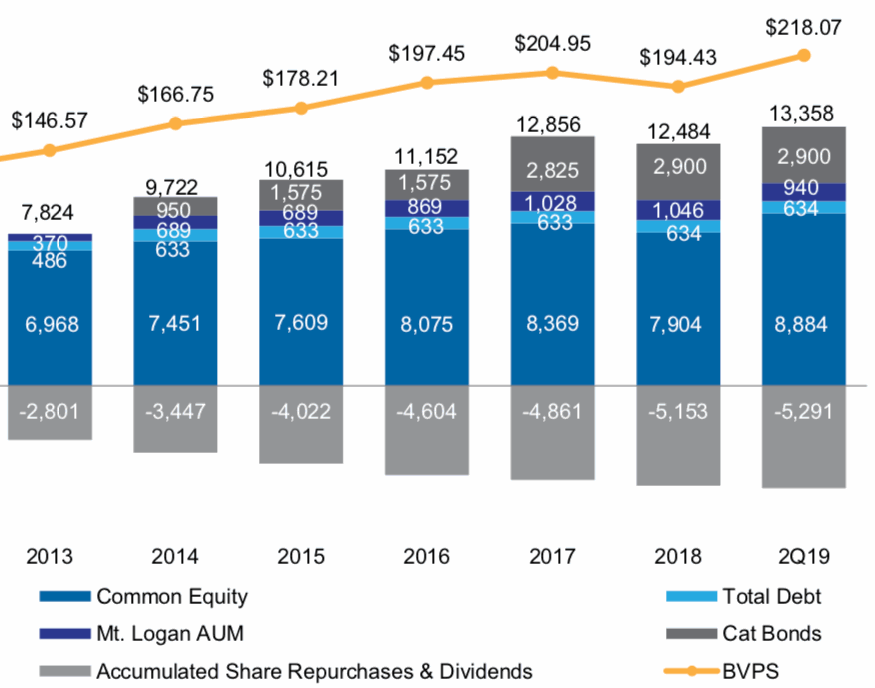 That’s slipped a little from the 32% of capital that third-party sources contributed to Everest Re in cat bonds and Mt. Logan Re at the end of 2018, but still an impressive amount.

As the losses move further behind Everest Re, the reinsurer should find it can begin to expand its Mt. Logan Re strategy once again.

It will also be interesting to see whether the reinsurer may look to the catastrophe bond markets later this year, as some of its older vintage Kilimanjaro Re cat bonds are due for maturity by December.

Everest Re has not sponsored a cat bond since April 2018 now, suggesting it is overdue a visit to the cat bond market and that the end of 2019 may be the time we see the reinsurance firm return.