The current near-record El Niño event appears on the wane, with conditions attributed to the phenomenon said to be in decline, but its effects set to be felt for some time to come, with insurance and reinsurance firms now turning their heads to the possible development of La Niña conditions.

The forecasts last year were correct, that the 2015/16 El Niño would be stronger and last longer into 2016 than had initially been expected. Weather and climatic events such as the recent tropical moisture plumes causing near-record rainfall levels in California and the flooding experienced in the U.S. southern states in recent days are testament to the effects of the El Niño event. 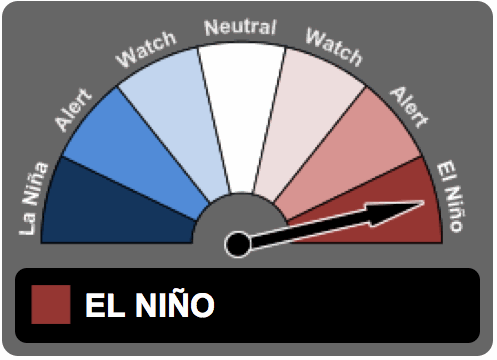 Right now the world still faces an active El Niño, according to the Australian Government Bureau of Meteorology’s (BOM) latest update on ENSO. However the BOM sees the current El Niño continuing to weaken and says that climate models suggest the El Niño event will end around the middle of 2016.

The fact that the recent El Niño has been so strong has meant that its effects have been longer lasting. Some outlier climate models even suggest a continuation of El Niño conditions right through the year, but the majority call for its steady decline now.

For insurance and reinsurance companies, as well as some ILS funds, which have been hit by claims due to El Niño related weather conditions through the winter of 2015 and into 2016, all eyes turn towards the potential for La Niña conditions to emerge on the heels of a departing El Niño.

La Niña is typically thought to herald more Atlantic tropical storm and hurricane activity, hence insurance and reinsurance companies, as well as investors in ILS funds, catastrophe bonds and other collateralised reinsurance vehicles, all need to keep abreast of the changing forecasts for the coming year.

The Australian BOM notes that “while some criteria have been met for a La Niña WATCH, there is still considerable variation between model outlooks beyond July.” Neutral conditions are favoured slightly, based on historical development of ENSO and the current model outlooks, but the BOM notes it is monitoring the situation closely.

The 2015–16 El Niño continues its slow and steady decline. The tropical Pacific Ocean has cooled further over the past fortnight, and trade winds are near normal. However the Southern Oscillation Index (SOI) remains very low, indicating that while El Niño is easing, it is still capable of influencing Australian and global climate.

International climate models indicate that cooling in the tropical Pacific will continue, with a likely return to neutral levels by mid-2016. For winter and spring, climate models favour ENSO neutral slightly ahead of La Niña. However, accuracy of forecasts made at this time of year are lower than those at other times, and therefore some caution should be exercised.

Although the 2015–16 El Niño is weakening, it will continue to influence climate during the southern hemisphere autumn. In Australia, the breakdown of strong El Niña events has historically brought average to above average rainfall to many locations. However, northern Australia typically sees less rainfall than usual.

Given the pace at which El Niño onset in 2015, which surprised many meteorologists and climatologists, just how quick the transition from El Niño to La Niña could be in 2016, or even if El Niño could persist, appears very uncertain at this stage.

The CPC also expects neutral conditions first, and highlights similar uncertainty to the BOM on the prospects for La Niña following on behind.

All models indicate that El Niño will weaken, with a transition to ENSO-neutral likely during the late spring or early summer 2016. Thereafter, the chance of La Niña conditions increases into the fall. While there is both model and physical support for La Niña following a strong El Niño, considerable uncertainty remains. A transition to ENSO-neutral is likely during late Northern Hemisphere spring or early summer 2016, with close to a 50 percent chance for La Niña conditions to develop by the fall.

The U.S. CPC expects the impacts of El Niño to continue, with higher than average precipitation expected, with the potential for further flooding events as a result.

The current El Niño has had an impact in many regions of the globe, leading to unusual weather patterns, storm systems, heavier than expected precipitation, droughts (thought to have cost the global economy over $8 billion), flash flooding, crop damage, forest fires and deviations from temperature norms.

These impacts look set to continue through the remainder of Spring 2016, while the El Niño conditions wane gradually. It’s likely too early to call for a La Niña at this stage, but the forecast is going to be important to watch for, particularly if La Niña conditions develop at the back-end of the U.S. hurricane season.

For insurance, reinsurance and ILS managers or investors, the El Niño conditions have raised the potential for aggregations of weather and climate events to cause losses. These attritional type of events are also increasingly likely to be a concern for ILS funds and managers, given the growth of collateralised reinsurance and aggregate covers.

If a La Niña comes into effect during the summer months it could result in conditions conducive to above normal U.S. and Atlantic hurricane activity. This is by no means guaranteed, but a shift to La Niña in late summer of fall would raise the prospects of more Atlantic tropical basin activity.

Essentially La Niña can result in equally extreme climate conditions as are seen with El Niño, but almost in reverse as the tradewinds affect the upwelling of cooler water in the Pacific ocean during La Niña conditions, compared to the warmer sea surface temperatures associated with El Niño.

As 2016 continues the level of certainty over when El Niño will dissipate, or whether it will completely this year, and whether a La Niña effect is likely on its heels, will increase as the models become more aligned. But right now it is the ongoing impacts of El Niño that are more likely to keep insurers and reinsurers on alert.

– El Niño forecast to be stronger, last longer into 2016.

– Stronger El Niño could both help and hinder re/insurance: KBW.