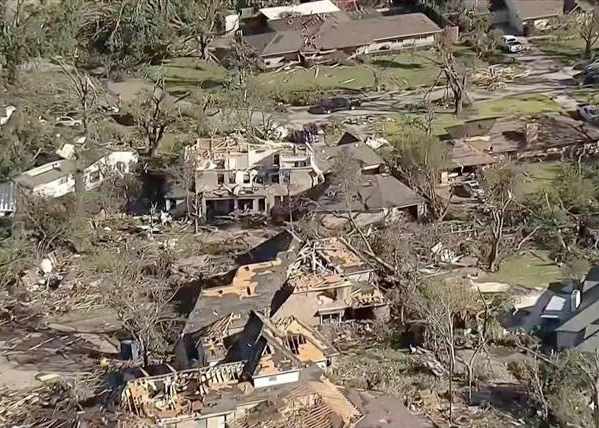 The Insurance Council of Texas (ICT)  has based its latest and updated estimate on the fact that the National Weather Service has now confirmed that it was nine tornadoes in total that touched down in and around Dallas County on October 20th.

Earlier this week we reported that the ICT had estimated that the Dallas tornadoes would likely result in an impact to the insurance and reinsurance industry of over a billion dollars, but now the expectation is that the impacts were more severe than assumed at that point.

The ICT explains how it now gets to the $2 billion, or more, industry loss figure.

“Preliminary projected estimates include over 30,000 auto and home claims. Commercial and business claims projections are still coming in at this time and the financial impact may likely rise,” the ICT explained in an update.

The Council compares the October 20th Dallas tornado outbreak with an example from 2015 in Garland, Texas that cost the insurance and reinsurance industry $1.2 billion.

“We have had a tremendous outpouring of people wanting to help the people impacted by this tragedy,” explained Richardson Mayor Paul Voelker. “We do have a lot of needs for the victims of this disaster, so we are mobilizing a Volunteer Reception Center to make those connections and leverage all of the resources available to help get our community back to normal as quickly as possible.”

No fatalities were recorded from this tornado outbreak, despite the large scale property damage experienced.

Meanwhile, insurance and reinsurance broker Aon’s Impact Forecasting unit explained on this tornado and wider severe weather outbreak, “An outbreak of severe weather spawned two dozen tornado touchdowns, damaging winds, and large hail across parts of the southern Plains and the Lower Mississippi Valley on October 20-21. At least four people were killed. The most significant impacts were recorded in Texas, where a confirmed EF3 tornado struck several neighborhoods in North Dallas. At least nine tornadoes touched down in the greater Dallas / Fort Worth metro region alone. Further tornado and storm-related impacts were cited in parts of Arkansas, Oklahoma, Missouri, Louisiana, and Tennessee.

“Given the scope of damage across several states – with particular emphasis on the scale of tornado damage in a densely populated part of the Dallas, Texas metro region – it is anticipated that economic and insured losses will individually reach well into the hundreds of millions (USD); if not higher.”

As we explained, in our previous article on this tornado outbreak, State Farm is considered the insurer with the largest exposure to these tornadoes, both through property and auto insurance, followed by Allstate (also auto), Farmers Insurance, USAA (also auto) and Liberty Mutual on the property side, as well as Berkshire Hathaway and Progressive in terms of auto insurance exposure.

As the loss estimates rise for this tornado outbreak, the chances of it attaching some reinsurance will increase, as too do the chances that some quota shares could see minor losses as well, raising the chances of some ILS funds or structures being affected by this event.