Update: Industry loss estimates have risen, with the latest suggesting a $2 billion insured loss from the tornadoes. Original article: The insurance and reinsurance industry is likely to face losses that rise into the billions of dollars following a storm system that caused a significant tornado in the Dallas, Texas area on October 20th.

The tornado touched down around 9pm local time and is estimated to have travelled at least 14 to 16 miles through residential and commercial neighbourhoods on the outskirts of Dallas.

Large hail was also experienced, which is expected to exacerbate the final tally of losses due to automobile damage in the Dallas region.

The Insurance Council of Texas (ICT) estimated that at least 100 homes were damaged by the tornado, as well as dozens of vehicles and that over 100,000 Dallas residents were without power after the storm.

No injuries or deaths had been reported fortunately, but damage reports to homes, businesses and vehicles were widespread, according to the ICT.

Corelogic estimates that the tornado was on the ground for between 14 and 16 miles, as it cut a swathe through the northern Dallas suburbs (see below for preliminary path map). This CoreLogic Reactor map shows the tornado’s path, with the lighter magenta shade representing areas that have a 50% damage probability, the darker magenta representing 70% and green 90%. 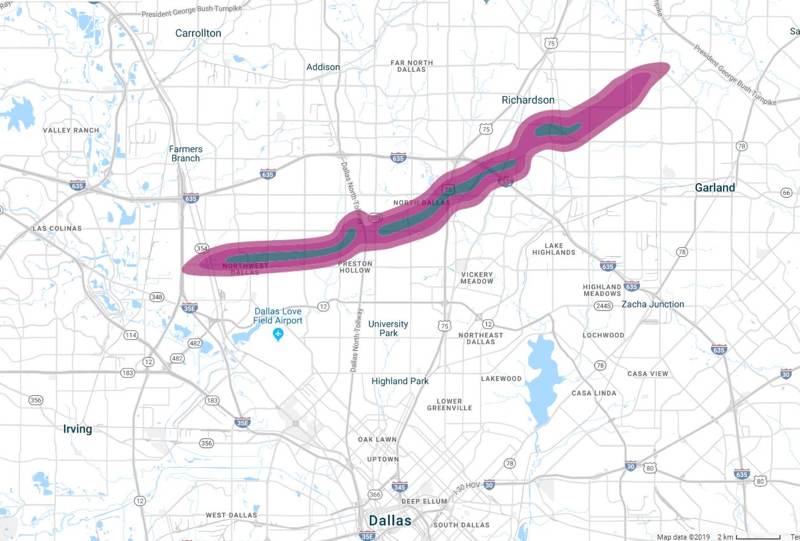 Corelogic also said that its Weather Verification Services confirmed that there was large hail of up to 2.5” in North Dallas and up to 1.5” south of Dallas.

Insurance Council of Texas spokesman Mark Hanna explained this week that his organisation expects that this Dallas tornado will prove more costly than an example from 2015 in Garland, Texas that cost the insurance and reinsurance industry $1.2 billion.

Hanna said that the Dallas tornado of October 20th was on the ground for longer and in a more heavily populated area than that 2015 event, leading him to suspect it will prove more costly.

Insurer State Farm has the largest exposure to the tornado, both through property and auto insurance, followed by Allstate (also auto), Farmers Insurance, USAA (also auto) and Liberty Mutual on the property side, as well as Berkshire Hathaway and Progressive in terms of auto insurance exposure.

The tornado passed through affluent areas of Dallas suburbs, leading to an expectation that the average insured claim from the storm would be higher than typically seen.

Two other tornadoes were also recorded in the region on the same night, resulting in an expectation of further insured losses. While north Texas also experienced more outbreaks of large hail and high winds during the same storm occurrence, which all suggests a larger insurance and reinsurance market impact.