Consolidation & controlling the value chain seen as key in Baden-Baden

As the reinsurance industry meets in Baden-Baden this week two factors are seen as key developments, the wave of consolidation and the urge to be bigger to enhance relevance, as well as having control of the value chain, from customer to capital. 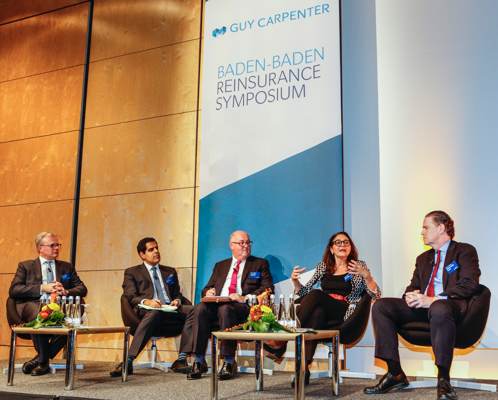 Speaking in Baden-Baden at reinsurance broker Guy Carpenter’s tenth annual Reinsurance Symposium, executives from the sector discussed the rise of the composite model, considering the implications this have for the industry and its participants.

James Nash, CEO of International at Guy Carpenter, explained that market conditions continue to pressure reinsurance market returns and as a result consolidation remains seen as a potential solution.

Whether scale proves to be enough alone to secure relevance remains to be seen and the question here will be how big and how broadly diversified a company needs to be, in order to secure its future.

Nash noted that alongside consolidation, other market participants are focusing on increased vertical integration as a way to gain more control over the entire value chain, from policyholder through to capital provider.

This is where the insurance-linked securities (ILS) market stands to gain, as its capital and capacity is brought ever close to the ultimate source of risk, removing waste from the value chain and maximising margins.

“The capital to risk value chain will continue to evolve but in the short run sellers are open for business offering more capacity and innovative solutions to solve strategic capital and volatility issues. We are seeing supply-driven demand,” Nash said.

It’s encouraging to hear that ample supply of capital is finally driving more reinsurance buying, as this opportunity has been here for buyers for some years now but it appears to have taken the losses of 2017 to stimulate an appetite to buy more protection.

Pina Albo, Group CEO at Hamilton Insurance Group, also participated in the Symposium discussion and noted that while we’ve been here before, mergers & acquisitions have been prevalent in the reinsurance market for some years now, some of the drivers are evolving.

“We’re watching the M&A movie again, but this time around we’re seeing different plot twists. There are three developments that I believe are currently influencing M&A activity today. First is the impact of alternative capital, second is the InsurTech phenomenon, and third is the entire digital revolution,” she explained.

Albo also noted that size isn’t everything, but re/insurers choosing to remain smaller need to be really good at their jobs and deliver client satisfaction.

“You don’t have to be big to be beautifully relevant or financially successful, but you do have to be focused,” she said.

Steve Arora, CEO of AXIS Re, said that the industry needed to adapt and become more client focused to succeed.

He said, “We are undergoing a period of unprecedented change and we must all adapt. We know that one of the biggest challenges we face is the price equilibrium dynamic and we must tackle that. But there is also a reason for optimism as trends over the long term are favourable for the industry.”

The price equilibrium dynamic is an interesting way to put it, as really what this market needs is transparent pricing based on four factors, risk, appetite, efficiency and loss-costs, hence it is not the job of the industry to “tackle” pricing as such, just to ensure it is commensurate (or stop underwriting the risks that aren’t don’t meet their own appetites and return requirements).

He said that he remains encouraged by the prospects for the global reinsurance sector, “It is a difficult time for our industry as we enter a new era. It will require all of us to have the courage to address the short-term dynamic and the vision to succeed in the long term.”

Finally, Charles Goldie, CEO of Property & Casualty at independent reinsurance firm PartnerRe, said that buyer demands will drive the development of M&A trends, meaning that firms will respond to what the client wants.

“M&A in the reinsurance space will eventually go where the buyers of reinsurance want it to go,” he said, adding “Increasingly, we see the buyers of reinsurance looking to concentrate their relationships with a smaller number of core reinsurers that they can consider as both capital and strategic partners. Ultimately, this points to both further consolidation in the number of truly global reinsurers as well as need for dedicated, independent reinsurers that have the ability to be strategic partners on a meaningful scale.”

This erosion of choice might not be at the top of the buyers list or in their best interests though, as most would rather have ample choice and the ability to optimise their placements dynamically, to match their risks to the most appropriate capital.

It’s perhaps a factor of the declining influence of the smaller, following reinsurance markets, rather than a sign that the bigger players are strengthening their hold on the market.

It also could simply be another phase in the market, as buyers attempt to second-guess which way it will move over the coming months.

What is certain is that M&A is expected to continue and may accelerate, while at the same time bolting on new businesses to control more of the value chain is likely to become a feature for all of the larger players, as well as specialists.

For ILS markets the ability to ride these trends and slowly gain more market share seems likely over the coming years, while at the same time the embedding of the capital markets into the insurance and reinsurance business model is likely to accelerate.

But it’s clear that the reinsurance landscape of the future is going to look very different from the past, perhaps as soon as in a handful of years. Which will mean opportunities are abundant for those who can match their capital to clients risks as directly, efficiently and dynamically as possible, while those with demonstrable expertise also stand to benefit from whatever secular trends emerge.