Collaboration between the Bermuda government and a range of local service providers has enabled the island to become a leading domicile for insurance-linked securities (ILS) business, according to the Bermuda Business Development Authority (BDA).

In the last six to seven years Bermuda has seen itself transform into a global hub for ILS transactions, underlined by the fact that in 2015 the island attracted the large majority (75%) of new issuance, according to a report commissioned by the BDA.

When the survey results launched, they showed that the BDA found that the impact of the ILS market on the economy of Bermuda is significant, underlining its importance alongside the islands leading reinsurance industry. 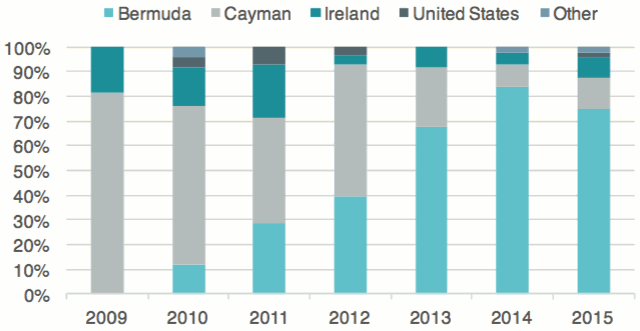 ILS issuance by jurisdiction or domicile

As highlighted by the above chart, no ILS business was transacted in Bermuda prior to or in 2009, but the introduction of legislation that enabled the establishment of Special Purpose Insurers (SPIs) in 2009 was the start of a transition that has resulted in Bermuda being a top domicile for ILS.

“The island has long been a Petri dish for new industry ideas. The development of SPI legislation in 2009 is a prime case in point, and the subsequent development of this asset class has demonstrated that,” said Ross Webber, Chief Executive Officer (CEO) of the BDA, speaking to Artemis.

Both the BDA report and Webber underline the important role collaboration played in the development of Bermuda’s mature and sizeable ILS marketplace, emphasising the necessity of working with public and private sector entities to first develop, and then continue to stimulate ILS business.

“Collaboration between government, industry, regulators and, the ILS Bermuda team and our business development agency has been a driving factor stimulating this industry’s success in Bermuda,” Webber told Artemis.

The SPI legislation introduced in Bermuda in 2009 was specifically designed to attract ILS and collateralised re/insurance companies to the region, says the report, and came about owing to a concerted effort between the Bermuda government and local service providers.

The report highlights a broad range of specialist service providers that operate in Bermuda, and which continue to play a crucial role in supporting the Bermuda ILS industry, and also in “matching investments with insurance risk,” says the report.

Underlining how influential the BSX is and how successful it is at attracting ILS business, the report highlights that at the end of 2015 $18.2 billion, or 69% of the overall, nominal outstanding issuance was listed on the exchange.

“The Bermuda Stock Exchange (BSX) currently hosts over $18 billion million in ILS securities listed, underlining the island’s claim to be the premier domicile for creating, listing and supporting these structures,” Greg Wojciechowski, President and Chief Executive Officer of the BSX, explained to Artemis.

“Bermuda has a highly regarded regulatory framework, a sophisticated legal system based on English law, developed infrastructure and global companies with physical presence. It says a lot about Bermuda’s reputation as a quality jurisdiction that it can to respond to changes in any market conditions and continue to provide a home to ILS within an attractive local regulatory environment.” 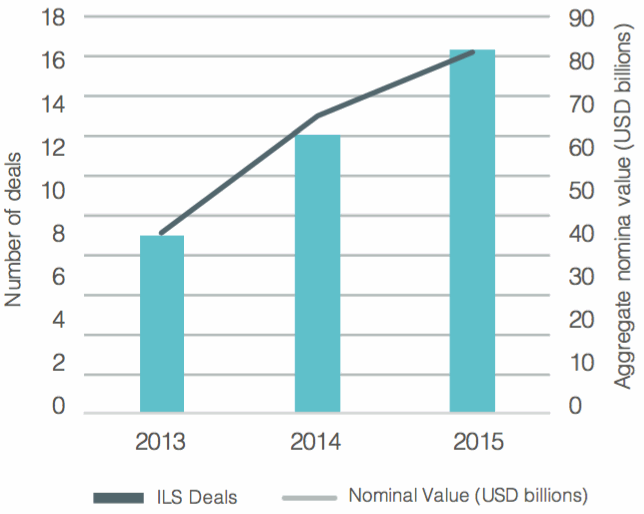 Growth of ILS listings on the Bermuda Stock Exchange (BSX)

The above chart shows the growth of ILS listings on the BSX from 2013 through the end of 2015, with the number of deals growing to 16 from eight, and the aggregate nominal value swelling to around the $80 billion mark.

“The unique, elite nature of Bermuda’s marketplace has created a highly innovative environment that has paved the way for rapid growth of the ILS industry here,” said Webber.

As the report explains, specialist funds, and or managers manage the majority of ILS assets around the world, and Bermuda domiciled and foreign managers employ an estimated 209 people on the island, generating approximately $64 million of payroll.

ILS fund managers manage a reported $55 billion, and the report claims that Bermuda is the most popular domicile for the establishment of an ILS fund, with 38%, or $21 billion of assets managed being done so by a manager with head offices in Bermuda.

However, the report notes, “this proportion has shrunk over the last two years as other jurisdictions have seen more rapid growth. Much of this growth has come from managers with access to high-net worth investors.”

It’s also likely that the recent rise of ILS and increased acceptance of the asset class, among investors and sponsors alike, has driven a desire for other ILS domiciles to take a larger slice of a marketplace that is poised for further expansion into new peril regions.

Perhaps somewhat offsetting the recent dip in new ILS funds entering the region, Bermuda has also seen growth in the volume of ILS managers from foreign jurisdictions setting up subsidiary offices on the island.

“This enables them to have direct access to the island. 47% ($26 billion) of assets under management (AuM) is managed by funds with an office in Bermuda. In addition, ILS managers without a permanent Bermuda presence also make extensive use of Bermuda’s infrastructure and service providers,” says the report.

Further highlighting the importance of public and private relationships in Bermuda’s ILS marketplace, the BDA is itself an independent public-private partnership funded by both the Bermuda government and the private sector.

The BDA undertakes marketing and business development strategies with a goal of stimulating growth in the Bermuda economy and creating and maintaining jobs.

As noted by Webber ILS Bermuda, an industry trade organisation that works with the BDA to promote the Bermuda ILS industry both at home and abroad, and the islands financial services regulator, the Bermuda Monetary Authority (BMA), were in 2009 and remain today essential to the success of ILS in Bermuda.

Regarding the BMA, the report explains “it works closely with the industry,” adding that its focus and dedication to the reinsurance industry “means that it is often able to regulate new structures more quickly than would be possible in other jurisdictions.”

Service providers such as transformers, fronting arrangements, insurance management, and ILS fund and insurance and reinsurance services also have a strong presence in Bermuda, each playing a role in the country’s dominant ILS industry.

Furthermore, the island has a range of law firms that have specialist ILS market expertise and also ILS consultancy companies, along with the “Big Four’ international accountancy firms, and each of the top five re/insurance brokers are represented on the island also.

Clearly it takes a concerted effort from both public and private sector entities to develop and maintain a successful and important ILS hub. But as evidenced by the expansion of Bermuda’s ILS industry since its creation in 2009, if done properly it can provide the local economy with valuable financial support and stability, while supporting the transfer of insurance risk in an efficient manner.

The full survey report can be downloaded here (PDF format).