An increased level of catastrophe losses in the second-quarter of 2016 saw some reinsurers incur losses above their expectations, according to analysis from RBC Capital Markets. And with certain ILS funds feeling the impact of increased losses it’s likely that some experienced more outsized losses than others.

The majority of insurers and reinsurers have now reported their second-quarter 2016 results and, with the array of headwinds in the marketplace it was expected that returns would be down, as profitability remains difficult to come by on both sides of the balance sheet.

“The second quarter of 2016 was a difficult period with above average catastrophe and large man made losses for the reinsurance industry,” said RBC Capital Markets in a recent report. 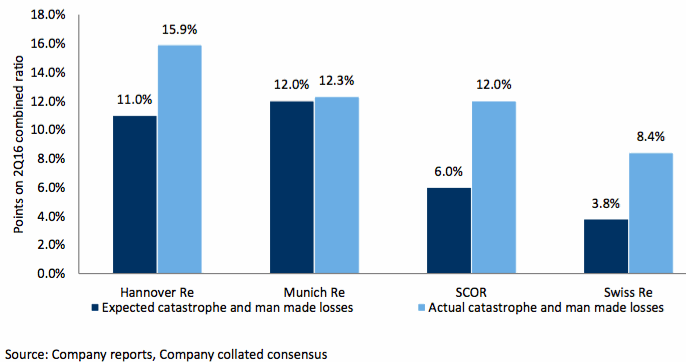 As highlighted by the above chart provided by RBC, the four large European reinsurance companies all experienced catastrophe losses in the second-quarter above their expectations.

“We believe this highlights a clear trend; losses were above expectations at all four of the reinsurers however they were much closer to expectations at Munich Re (just 0.3% ahead of their average catastrophe loss expectation). We see this is a clear indication of the strong conservatism built into ongoing guidance at Munich Re,” continued RBC.

With insurance-linked securities (ILS) capacity participating in an increasing volume of collateralised reinsurance placements and continuing to expand its share of global catastrophe insurance and reinsurance risk, naturally, some ILS players felt the impacts of heightened losses in Q2.

Furthermore, with certain ILS funds/managers having a higher concentration of exposures than others in Q2, owing to the regions in which they underwrite, it’s likely that some felt the impact more than others, as seen with global insurers and reinsurers in the quarter.

Not long after the third-quarter of 2016 got underway, J.P. Morgan warned that losses in Q2 were likely to exceed reinsurers’ budgets, stressing that some could be in a difficult situation should the current Atlantic hurricane season be an active one.

As highlighted by the analysis from RBC, some reinsurers clearly adopted a more conservative approach to catastrophe losses during the soft market conditions, and it’s possible that should losses in the second-half of this year maintain a similar trend that certain firms could find themselves in a very challenging environment.

Losses in the second-quarter included the Alberta, Canada wildfire event, the costliest in Canada’s history at C$4.7 billion, earthquakes in Japan and Ecuador, and a series of costly, damaging hail and severe weather events in Texas, U.S., among others.

J.P. Morgan explained that cat losses in the second-quarter of 2016 exceeded $13 billion, and that reinsurers were expected to assume roughly 50%, or $6.7 billion of the damages.

So it’s not too surprising that some reinsurers experienced losses above expectations, driven by the variety of perils and regions that experienced losses in the quarter and the unprecedented volume of insured losses seen in Canada, and larger losses elsewhere.

Efficiency and discipline continue to be key for insurers, reinsurers, and ILS players in the softening landscape, and the need for a sensible approach to underwriting becomes more apparent when losses start to mount on top of the challenging market conditions.

Clearly, losses in the second-quarter of this year took some companies by surprise, and with reserves continuing to diminish it’s likely that some will be hoping for a moderated volume of cat losses in the final two quarters of the year, when compared with Q1 and Q2 2016.