At a time when Australian has been sweltering in record heat while bush fires burned out of control, then suffering from severe storms, a recent study seeks to quantify the effect of climate variability on farm profits in the country.

The impacts of both short-term climate risks such as drought and longer-term shifts in climate conditions have hurt Australian farmers, with the average broadacre farm profit declining by around 22% since 2000, costing the industry around $1.1 billion a year.

New research from the Australian Bureau of Agricultural and Resource Economics and Sciences (ABARES) shows that climate and variability is having a significant impact on farmers in the country and it recommends the use of risk transfer tools, including index or parametric insurance, as a way to help reduce the volatility they are experiencing.

An observed shift to hotter and drier conditions over the period 2000 to 2019, compared to 1950 to 1999, has negatively impacted the profits of Australian crop and livestock farms.

“Average temperatures have increased by about one degree since 1950, while recent decades have also seen a trend toward lower winter season rainfall, particularly in the southwest and southeast of Australia,” ABARES Senior Economist Dr Neal Hughes explained.

“Controlling for all other factors, we estimate these changes have reduced average farm profits by around 22 per cent. These effects have been most pronounced in the cropping sector, reducing average profits by 35 per cent, or $70,900 per year for a typical cropping farm.

“At a national level this amounts to an average loss in production of broadacre crops of 8% or around $1.1 billion a year.

“Although beef farms have been less affected overall, some beef farming regions have been affected more than others, particularly south-western Queensland.”

This effect can clearly be seen in the chart below, that shows the effect of climate variability on average farm business profit 1949–50 to 2018–19, assuming current farms and commodity prices. 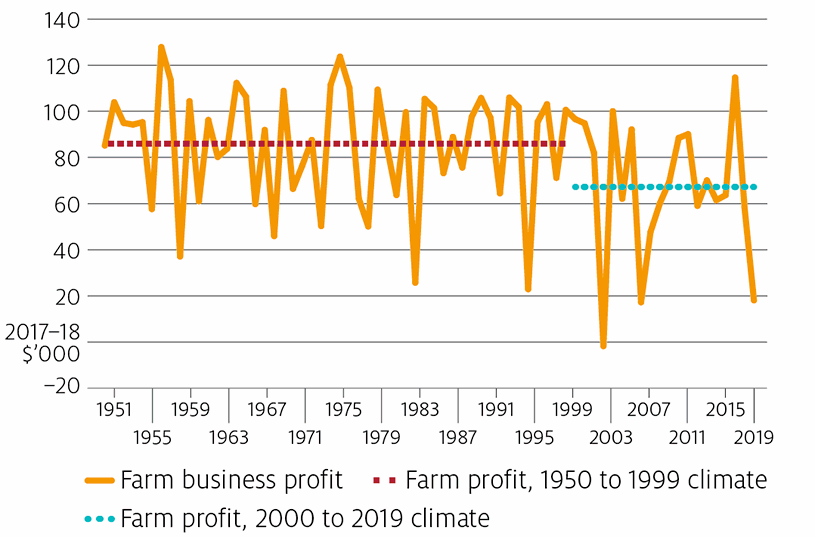 The study finds that Australian farmers are adapting to the variable climate conditions and period of warmer dry weather seen in recent years, but also notes that they could be doing more and may need to should it continue.

ABARES Executive Director Dr Steve Hatfield-Dodds commented on the study, “Analysis of this kind is complex, as you need to account for the many factors that affect farm profits, including seasonal conditions, input and output prices, technology and management practices, and farm size.

“ABARES is only able to do this because of our long-term investments in high quality farm survey data and our multi-year effort to build the farmpredict model.”

“The results from this study have important implications for the agriculture sector, particularly for how farmers and governments respond to drought risk.

“Governments face a dilemma because providing relief to farmers in times of drought risks slowing industry adjustment and innovation in the longer-term.

“Supporting farm households experiencing hardship is important, but for the long term health of the sector this needs to be done in ways that promote resilience and productivity, and allow for adjustment and change.

“Key options in this regard include research and development to improve long-term farm drought resilience, including further development of weather insurance markets.

“Insurance is an important area for further research, as it could provide farmers new options for managing climate risks.”

The climate variability and drought seen in recent years has directly affected profits, but also heightened volatility for farmers and related industries in Australia as well.

It requires a response, both at the policy and political level as well as in terms of farmers working to improve their resilience to climate variability and drought, while also better managing the risks with the help of risk transfer and insurance.

Weather risk transfer, insurance and reinsurance markets can help and are relatively mature in Australia.

As we explained recently, the contract looks set to pay-out as much as A$57.3m at the end of the current year, as grain production levels in the covered east coast areas of Australia that this derivative risk transfer arrangement is on-risk for have fallen by such a degree that GrainCorp will likely benefit from a significant pay out in the first year of the transaction.

This risk transfer arrangement was put in place to hedge out the earnings volatility GrainCorp suffers from due to climate variability and drought, precisely the type of insurance or reinsurance related protection that Australian agri-businesses and farmers may increasingly need, the new data from ABARES suggests.

“Viable weather insurance markets” are a promising development, the ABARES study explains, however the market for climate risks specifically still remains a bit limited, it says.

“Index-based or parametric insurance provides an alternative approach, where payouts are based on weather data rather than actual farm damages,” ABARES says.

Overall, insurance and risk transfer against climate variability are an important area for research, ABARES believes, with work to be done to develop better data sets and tools to support drought insurance.

Of course, this is where the reinsurance and also insurance-linked securities (ILS) market have both the appetite and expertise to help deliver the protection required to smooth volatility in earnings and support adaptation to the potential new normal in terms of climate risks being faced by Australia and other regions of the world.