All of the international climate models surveyed by the Australian Government Bureau of Meteorology, for its latest update on the El Niño Southern Oscillation (ENSO), indicate that the current El Niño is likely to strengthen and persist into early 2016.

The update published today is aligned with the latest El Niño forecast from the U.S. NOAA’s Climate Prediction Center, which recently upgraded its ENSO outlook to an 80% chance that it will persist into Spring 2016, while also saying they expect conditions to be stronger.

The Australian Government Bureau of Meteorology forecast suggests a strong El Niño is likely, given that a typical El Niño would be expected to weaken in the new year.

“All international climate models surveyed by the Bureau of Meteorology indicate El Niño is likely to strengthen, and is expected to persist into early 2016. El Niño events typically peak during the late austral spring or early summer, and then weaken in the new year,” the agency explained.

The agency provides some discussion around its findings:

The 2015 El Niño continues to develop. Weakened (or reversed) trade winds have resulted in further warming over much of the tropical Pacific Ocean. All key ENSO ocean monitoring areas have been more than 1 °C above average for 10 successive weeks—two weeks longer than the record in 1997. The eastern tropical Pacific is now at or exceeding +2 °C. In the atmosphere, the past week has seen the Southern Oscillation Index (SOI) drop to around −20, the lowest values of the event so far.

El Niño often brings below average winter and spring rainfall over eastern Australia and above-average daytime temperatures over the southern half of the country during the second half of the year. However, other factors, such as temperatures to the north of Australia and in the Indian Ocean, also affect Australia’s climate, meaning El Niño is not the only influence on rainfall and temperature changes.

The Indian Ocean Dipole (IOD) is currently neutral. A positive IOD event remains possible, with three of the five international models suggesting a positive IOD is likely during late winter to spring. A positive IOD is typically associated with reduced winter and spring rainfall over parts of southern and central Australia.

We’ve now officially been experiencing El Niño conditions since early May, according to the BOM data, with each following update to the forecast suggesting a stronger and longer lasting El Niño than had previously been expected.

The fact that the eastern tropical Pacific is seen to have warmed to levels exceeding +2 °C is significant, as that is the level (at least in the central Pacific) where some forecasters and climate scientists begin to consider it a “super” El Niño event.

A number of forward looking climate models are now showing that the current El Niño could get as strong as anything seen in recent history, to rival 1997/8, later this year.

The Australian BOM previously said that the activity in the Pacific cyclone and typhoon season could stimulate further warming as well:

The 2015 El Niño is likely to strengthen in the coming weeks, largely due to recent tropical cyclone activity. Several tropical cyclones, including a rare July cyclone in the southern hemisphere, have resulted in a strong reversal of trade winds near the equator. This is likely to increase temperatures below the surface of the tropical Pacific Ocean, which may in turn raise sea surface temperatures further in the coming months.

Scientists point to models, both statistical and dynamic, which they say are coming to a consensus that the current El Niño is likely to reach “Strong” status officially by the end of this month.

Jan Null of Golden Gate Weather Services provides an excellent chart comparing weekly SST values for 2015 with the peak El Niño year of 1997, as well as the mean forecast for the rest of the year. 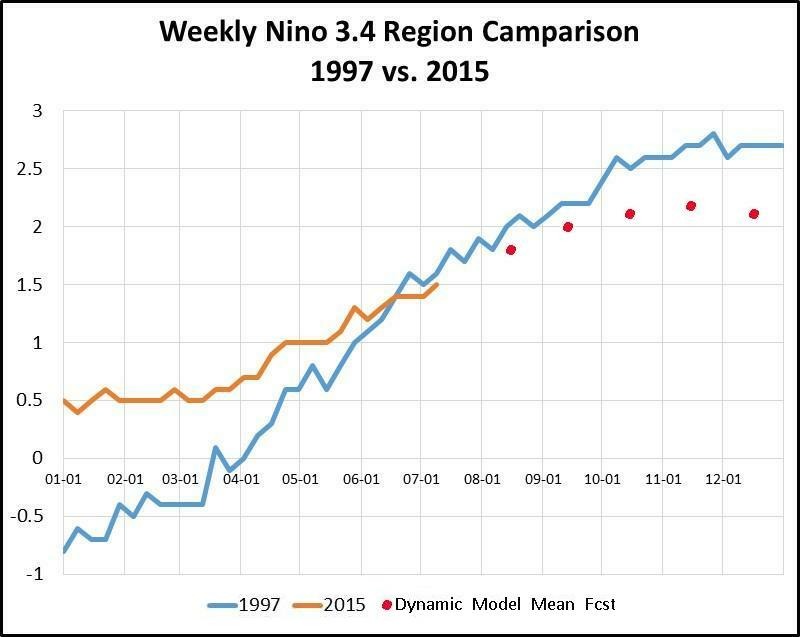 As we said before, the stronger the El Niño conditions are, typically the clearer cut the impacts are typically expected to be around the globe. That could exacerbate the potential for any El Niño related hit to insurance and reinsurance markets, agriculture and other exposed sectors.

– El Niño forecast to be stronger, last longer into 2016.

– Stronger El Niño could both help and hinder re/insurance: KBW.