According to international broking group Howden, non-marine catastrophe retrocession rates-on-line for excess-of-loss coverage rose by an average of 15% at the key January 1st 2022 renewal season, outpacing property catastrophe treaty reinsurance rates-on-line by around 6%.

Including the latest rate increases, Howden now estimates that non-marine catastrophe retrocession rates are up some 75% since their low in 2017.

Consecutive years of catastrophe losses that particularly affected retro and especially frequency covers are of course the main driver of this.

But, at the January 2022 renewals, Howden also notes that, “Climate change and the attendant issue of catastrophe model efficacy were decisive factors this year.”

Further explaining that, “The unusual mix of secondary events fuelling sentiment that changing weather patterns are now increasing both the frequency and severity of climate-sensitive perils.”

The retrocession market was seen to be particularly challenging at 1/1, Howden said, after catastrophe losses through 2021 and the ongoing trapped ILS capital issues.

Aggregate retro covers saw sharper than average rate increases, while there were double-digit outcomes for some loss-affected occurrence covers as well, Howden explained.

“After five successive years of price increases, the cost of retrocession protection is now approaching levels last seen in 2009. This equates to an average increase of more than 75% since 2017,” the broker commented. 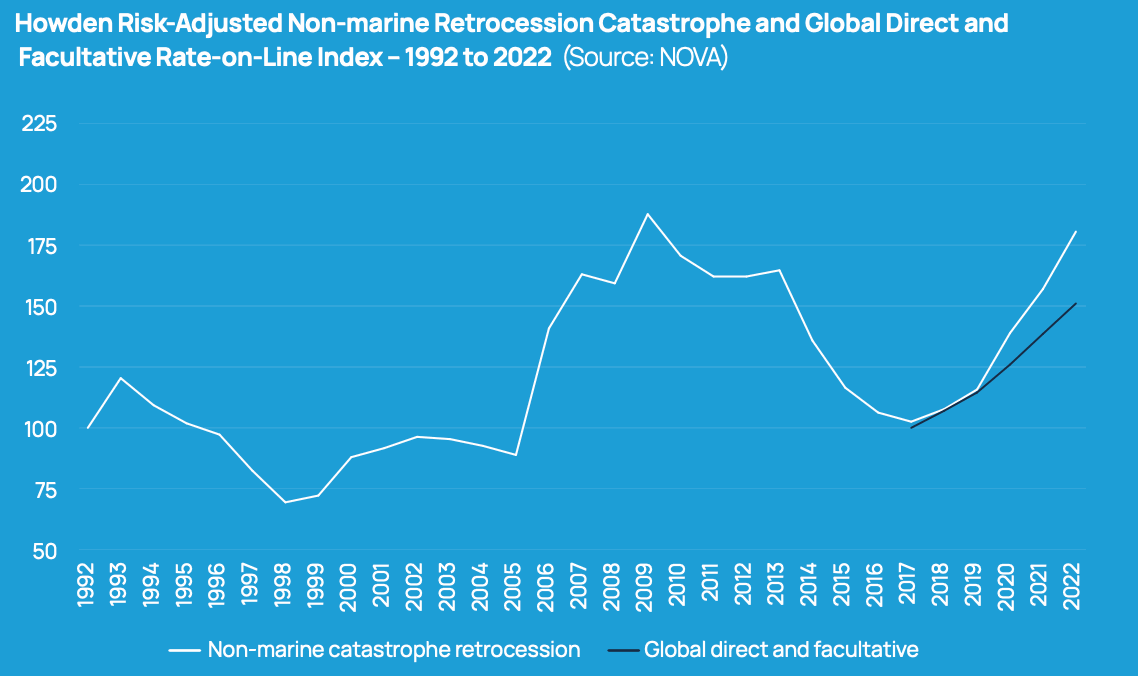 Explaining more of the 1/1 retro market dynamics, Howden said, “Confronted by constrained capacity for proportional and aggregate covers, along with flat budgets, some retrocession buyers were forced to restructure programmes or explore alternative solutions.

Conversely, while retrocession was up 15% on average, Howden estimates that global property catastrophe reinsurance rates-on-line rose by 9% at the renewals, which is the biggest year-on-year increase for these since 2009, by its reckoning.

The “acute pressures” in retrocession filtered down to the primary reinsurance market, Howden said, which meant that in some cases, “carriers had less clarity than usual around their net positions when offering renewal lines on their 1 January portfolios.”

Loss experience in Europe was a key driver of higher rates across the global catastrophe reinsurance market.

Howden noted that European catastrophe programs that were loss impacted typically saw double-digit increases, on a risk-adjusted basis, while there were also significant changes to some structures including higher deductibles and a shift towards occurrence covers.

“A desire from capital capacity providers to achieve perceived pricing adequacy for lower-attaching perils led to more disciplined underwriting and higher attachment points across a number of programmes in Europe,” Howden explained. “Fears and expectations that these types of events will become more frequent as a result of climate change saw aggregate capacity shrink, with per event capacity more widely available.”

The average property catastrophe reinsurance rate-on-line increase in the United States was more muted, coming off a higher base, but still rates were up 6.5% on average.

Differentiation was seen to be key in US renewals at 1/1, with lower layers particularly affected and seeing some restructuring in response to recent catastrophe activity.

One factor that has helped in buoying reinsurance and retrocession rates at the renewals, is the fact capital levels did not increase dramatically at year-end, especially in the ILS market that focuses on collateralised covers.

“A sizeable portion of trapped capital in the collateralised market, where investor fatigue from the five-year run of sizeable losses prevented reloading on the scale seen in previous years,” helped to offset increases in traditional reinsurance capital and catastrophe bonds, Howden notes.

Commenting on the renewal outcome and the year ahead, David Flandro, Head of Analytics, commented, “A host of factors contributed to unusually late renewals this year, with 11th hour secondary perils complicating the process further. The market is faced with known unknowns like climate change, inflation and lingering COVID concerns, all of which are creating uncertainty.

“Nevertheless, with insurance capital currently at record levels, and premiums rising on the back of higher pricing and heightened risk awareness, this remains a resilient and well-capitalised marketplace that can manage these challenges.”

José Manuel González, CEO, Howden Broking added, “Irrespective of market cycles, clients expect the insurance sector to innovate, to develop creative solutions and to offer sufficient capacity during what is one of the most significant periods of change in living memory.

“We see climate risk as one of the primary concerns for (re)insurance in this decade. Insurers must be prepared to re-evaluate climate-related risks proactively, and to provide a level of flexibility in underwriting solutions in order to maintain coverage ability whilst also creating new and innovative products. This will be no easy feat, and insurance will be a critical component in driving the mitigation and adaptation needed to confront climate change risks and deliver long-term profitability.”