Dedicated catastrophe funds and institutions continue to provide the majority of capacity to the ILS space while hedge funds have also increased their market share in recent times. At the same time, the geographical mix of the investor base in 2016 varies greatly from the previous year, according to Aon Benfield.

Aon Benfield, the reinsurance brokerage division of insurance and reinsurance intermediary Aon, has discussed the blend and activity of the insurance-linked securities (ILS) investor base for the 12 months ending June 30th, 2016.

In line with the previous 12-month period and perhaps of little surprise to our readers and those interested in the space, catastrophe funds continued to provide the large bulk of ILS capacity in the period, growing from 47% in 2015 to 57%, in 2016.

Following the range of dedicated catastrophe funds, institutional investors provided the next largest share of ILS capacity in 2016 of 20%, although this is a decline from the 32% reported a year earlier.

Nevertheless, combined, institutional investors and dedicated catastrophe funds provided the large majority of capacity in the ILS space during the period, totalling 77% in 2016, so only slightly down from the 79% recorded a year earlier.

“Continued softening of rates, however, resulted in the overall capacity from institutions declining by more than one third to 20 percent,” says Aon Benfield, in its September 2016 ILS market report. 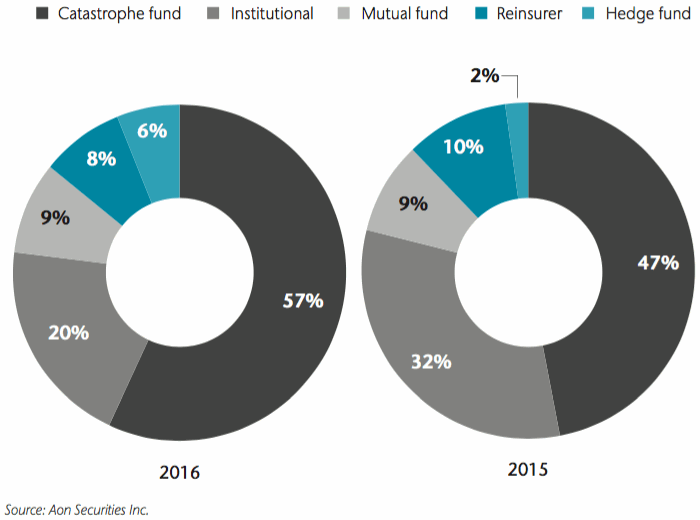 As shown by the above charts, capacity provided by mutual funds and reinsurance companies remained relatively flat when compared with the previous 12-month period, while hedge funds increased their share of the market by 4% to 6%, in 2016.

The reinsurance broker explains that this is likely due to some hedge funds increasing their participation in the sector in an effort to take advantage of a number of high-yielding deals that came to market.

Interestingly, in its report Aon Benfield also provides some insight into the geographical mix of the ILS investor base during the 2015 and 2016 12-month period, ending June 30th, which reveals that geographical mix of investors in 2016 varied substantially to the previous year.

In both 2015 and 2016 the U.S. provided the main source of capital, but this did increase by a fair amount to 50% in 2016, from 34% in the previous year. In fact, Aon Benfield cites that its 50% share meant that the U.S. regained volumes that it lost during the prior 12-month period, “reaching the highest participation rate in the last decade.”

Naturally, as the U.S. increased its volume of ILS investors other locations saw declines in this area, with the steepest occurring in the U.K. Participation in the 2015 period from U.K. catastrophe bond investors totalled 11%, but this fell to 5% in 2016, which is more in line with the region’s historical average, says Aon Benfield. 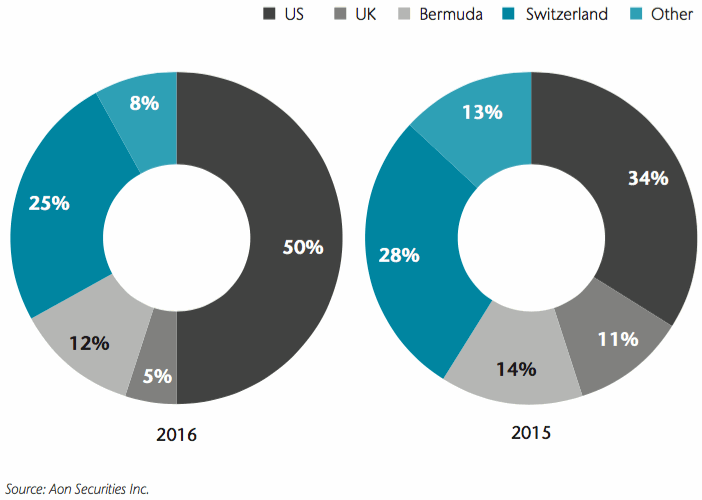 “The Other regions category decreased largely due to lower participation from Germany in 2016, with France and Japan holding at levels consistent with 2015,” says Aon Benfield, and highlighted in the above chart.

The chart also shows that Bermuda and Switzerland remained largely unchanged from year-to-year, with the former declining from 14% in 2015 to 12% in 2016, and Switzerland shrinking its participation to 25% in 2016, from 28% in the previous year.

Investors clearly remain interested in the space and in recent times it’s the supply of new issuances that has failed to keep up with investor demand, and not the other way around. Returns in the ILS are lower than in previous years, but investors appear willing to take on a lower yield in return for a diversifying and uncorrelated asset class, that continues to expand and evolve all the time.