Catastrophe bonds that are exposed to the California wildfire peril are expected to face increased levels of volatility and also discounts in their pricing on the secondary market due to the ongoing wildfire events in the state, according to investor Plenum. 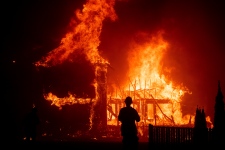 Zurich based specialist insurance-linked securities (ILS) and catastrophe bond investment manager Plenum Investments said that the wildfires in California, which have now become the most destructive on record, will drive volatility through exposed cat bond positions the investment manager holds.

With the wildfires still raging and strong winds, along with dry conditions expected to persist, the impacts from this outbreak look set to continue.

As we wrote this morning the expectation is that the wildfire outbreaks will drive multi-billion dollar insurance and reinsurance market losses.

For the catastrophe bond market in particular, most of the exposure is going to be from cat bonds providing reinsurance or retrocession, in particular aggregate cat bonds.

Although another angle of exposure is the electrical utility sponsored wildfire property liability catastrophe bonds, which as we highlighted earlier today would be at risk should PG&E be deemed as responsible for the Camp fire starting.

Plenum said that the eventual damage caused by the Camp Fire could be on a par with last year’s Tubbs wildfire, which caused insured losses of around $8 billion.

It remains too early to speculate though and property values are significantly lower in the town of Paradise (as our sister publication Reinsurance News explained today here), which the Camp Fire has devastated, compared to the area were the Tubbs fire burned.

Whatever the eventual loss for insurance and reinsurance interests, the exposure for the PG&E sponsored $200m Cal Phoenix Re Ltd. (Series 2018-1) catastrophe bond is clear. Should the electrical utility be deemed to be in any way liable for the Camp wildfire outbreak investors in this cat bond may face a loss.

Plenum said that uncertainty is likely to be reflected in the valuation of investments in the Cal Phoenix Re cat bond in investor portfolios as a result.

Meanwhile the Woolsey fire continues to impact the Malibu area and surroundings, with the number of properties destroyed having risen according to the latest estimates.

With multiple wildfire outbreaks burning in California, Plenum highlights the exposure that some aggregate and multi-peril catastrophe bonds will have to these events.

These wildfire events may erode the retention for catastrophe bonds covering wildfire and with an aggregate trigger, Plenum explained, although with catastrophe losses currently running lower than 2017 it’s likely most of these have further to run than they did when the California wildfires in Q4 2017 were burning.

Therefore, Plenum says that most of these aggregate cat bonds can likely absorb more losses before they reach the point at which they are triggered and payouts would be due.

However, just the fact they are exposed and that wildfire season has some way to run means that there could be volatility ahead for secondary market valuations of exposed catastrophe bonds.

“We expect increased volatility and price discounts on potentially exposed bonds in the coming weeks as long as the fires are not contained and there is a high degree of uncertainty about the amount of damage,” Plenum said.

The only two catastrophe bonds that are purely exposed to California wildfire risks are those sponsored for electrical utility companies PG&E and Sempra Energy.

The rest of the exposure to wildfire risks in the cat bond market comes through multi-peril cat bonds sponsored by the likes of insurers USAA and Nationwide Mutual. These bonds would mostly require the losses from these 2018 California wildfires to eclipse the losses seen in 2017 from the same peril, in order for them to be really considered at-risk of loss.