The cat bond lite, or private cat bond sector continues to evolve as the size of transactions increase and issuance levels remain strong in 2016, underlining the value of the space for both investors and sponsors, reveals PCS.

In its third-quarter 2016 catastrophe bond market report, PCS explores the composition and growth of the cat bond lite space, a sub-sector of the insurance-linked securities (ILS) market that has expanded in recent years.

According to PCS, during the third-quarter of 2016 roughly $122.4 million of new risk capital came to market from four cat bond lite structured transactions. It’s worth noting here that according to the Artemis Deal Directory, five cat bond lite structures came to market in Q3, with the Artemis data including the $8.947 million Artex SAC Limited – Series CX Notes deal, which disclosed very little deal information.

“While the composition of the cat bond lite market continues to evolve – particularly with larger transactions – the market itself remains robust.

“The continued strong use of cat bond lite indicates that the market has seen the value of securitization for private transactions in conjunction with a streamlined issuance process,” explains PCS.

PCS continues to explain that a high volume of cat bond lite activity in the third-quarter of 2016 has resulted in year-to-date publicly revealed issuance reaching $423 million, from 11 transactions. While this is down roughly $67 million on the first nine months of 2015, a period that saw 16 transactions come to market, it’s still some way above the $242 million full-year issuance seen in 2014, a record-breaking year for overall cat bond issuance.

Cat bond lites are designed to facilitate an easier, more streamlined approach to catastrophe bond issuance, providing the same transparency and structure of a traditional 144A cat bond with increased flexibility for sponsors.

The continued growth of the space, along with the size of deals becoming larger and larger, highlighted by the $75 million Market Re deal issued in Q3 and others, suggests that the acceptance, willingness and understanding of investors and sponsors in the space continues to grow.

Utilizing the Artemis Deal Directory, PCS also provides a breakdown of cat bond lite issuance during the first nine months of the year by trigger type, which, shows that in terms of capital raised an indemnity trigger was used on 75% of issuance, which shrinks to 50% in terms of the number of transactions. 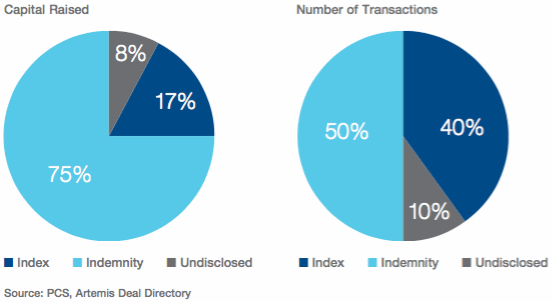 “Interest is growing in the cat bond lite structure across the market, with the greatest opportunities for traditional insurers and reinsurers seeking to securitize ILWs and other risk-transfer instruments. Inquiries to PCS about cat bond lite have accelerated this year, particularly from untapped areas of the market,” says PCS.

Traditional catastrophe bond issuance remains strong, but has declined in 2016 when compared with the last two years, as highlighted by the Artemis Q3 Catastrophe Bond & ILS Market Report.

But at the same time, the cat bond lite space and the use of collateralized reinsurance has increased and continues to evolve, ensuring that the ILS space remains robust, and continues down its growth path even at times of broader reinsurance market turmoil.