The Bermuda insurance and reinsurance market’s share of global alternative capital capacity accelerated in 2018 to reach an impressive $71 billion, or roughly 73%, as capital raising flowed to Bermuda-based ILS structures and funds.

As alternative capital in insurance and reinsurance, from the dedicated insurance-linked securities (ILS) fund managers, reinsurer joint-ventures and ILS vehicles, as well as other fully collateralised structures, reached around $97 billion at the end of 2018, the latest data from the Bermuda Monetary Authority (BMA) shows the important role of the island grew that year.

That year, Bermuda’s alternative capital structures and reinsurers reported around $19 billion of increased capacity via existing insurance-linked securities (ILS) structures and another $12 billion of new capacity coming into the market, the BMA reports.

Bermuda’s alternative capital market players took on risk from nine lines of business and provided coverage to four major geographical regions of the world in 2018.

Property catastrophe exposure (including property retrocession) remained the most significant line of business underwritten by alternative capital in Bermuda, representing approximately 90% of GWP for the surveyed ILS structures and reinsurers.

The United States was the largest region of assumed risk coverage, with some 48% of aggregate limits covered coming from the U.S. marketplace.

Bermuda’s share of global alternative capital activity rose from 58% in 2017 to 73% in 2018, as the island remained the dominant location for ILS activity and for collateralised reinsurance to be transacted in. 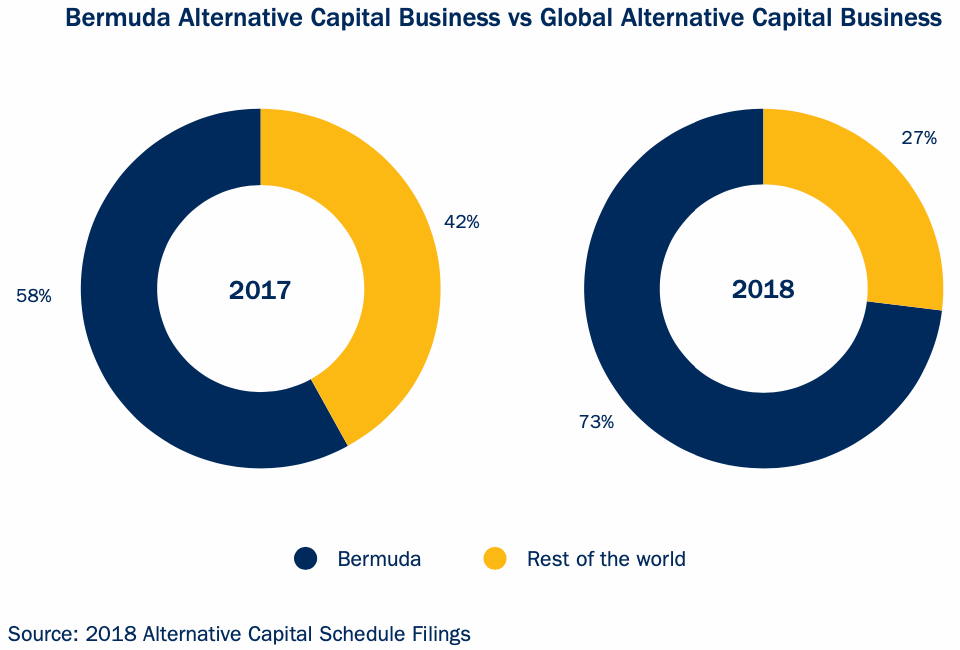 Collateralised reinsurance remains the dominant form of alternative capital transactional structure, with some $41 billion or 58% of outstanding issuances at year-end 2018 located in Bermuda vehicles (up from $28.5 billion in 2017).

Catastrophe bonds were the second most common structure used in Bermuda to deploy alternative capital, standing at around $26 billion or 37% of the total alternative market aggregate limit at the end of 2018 (up from $19 billion in 2017).

Sidecars and other collateralised reinsurance or retro structures made up the remaining 5% of alternative capital deployed in the Bermuda market in 2018. 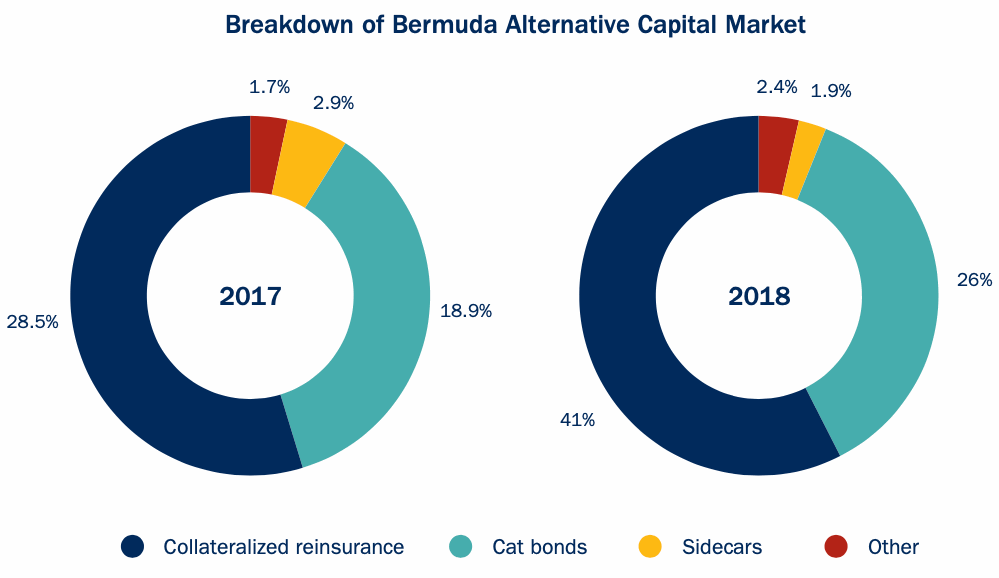 In 2018 the alternative capital market took a significant $3 billion of underwriting losses in Bermuda, but perhaps more telling is the $7.8 billion of net losses and net loss expenses reported by the BMA, which also factors in prior year loss development as well, we believe.

The overall result for the alternative capital structured in Bermuda was a net loss of $2.6 billion for 2018, which is the same level of loss as in 2018. However, with alternative capital assets up 27% to $94 billion in the year, the increased gross premiums written helped the overall net loss not to accelerate away from the prior year.

Excess of loss reinsurance and retrocession covers remains the dominant focus of Bermuda’s alternative reinsurance capital market in 2018, at 65% of the total, followed by quota shares at 23% and other structures including parametric, index triggers and stop-loss at 12%. 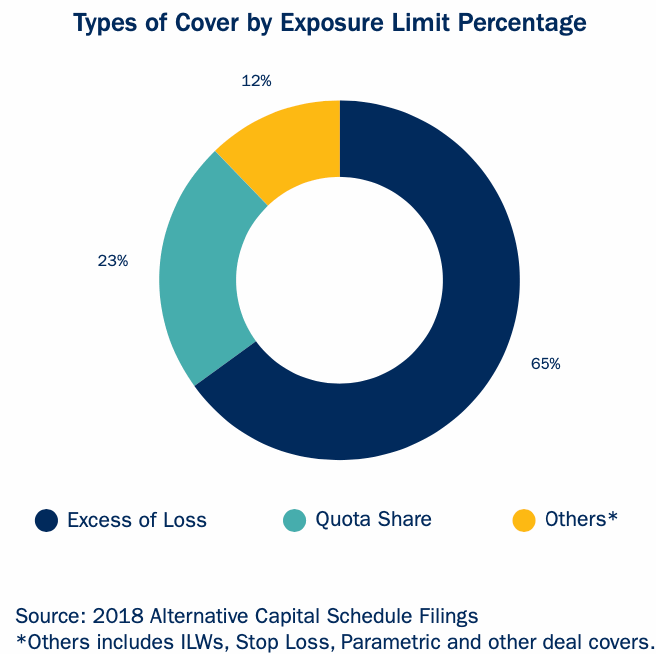 Bermuda remains the most actively used domicile in ILS and the home of a significant proportion of the ILS managers deploying capital, as well as the reinsurance firms leveraging it.

Bermuda’s dominance in the space is likely to persist. But overtime, as ILS returns to growth in the coming years, we’d expect to see the total limits and capital managed and deployed there rise, but the percentages may fall a little as investors look to diversify globally into other locations.