Catastrophe losses covered by insurance and reinsurance reached $78 billion in 2020 according to Willis Re, which the broker sees as 17% above the 10-year average.

The reinsurance broking arm of Willis Towers Watson (WTW) notes that the figure could have been much higher were it not for a number of near-misses throughout last year.

In addition, the U.S. hurricane season in 2020, while busy and record-setting in terms of number of storms, did not deliver the insurance and reinsurance market impacts of other recent tropical storm seasons.

Instead, it was frequency and smaller events that drove a significant proportion of the insured catastrophe loss total in 2020.

The $78 billion of insured losses from catastrophes and severe weather recorded by Willis Re sits 17% above the 10-year average of $65.5 billion, the broker said. 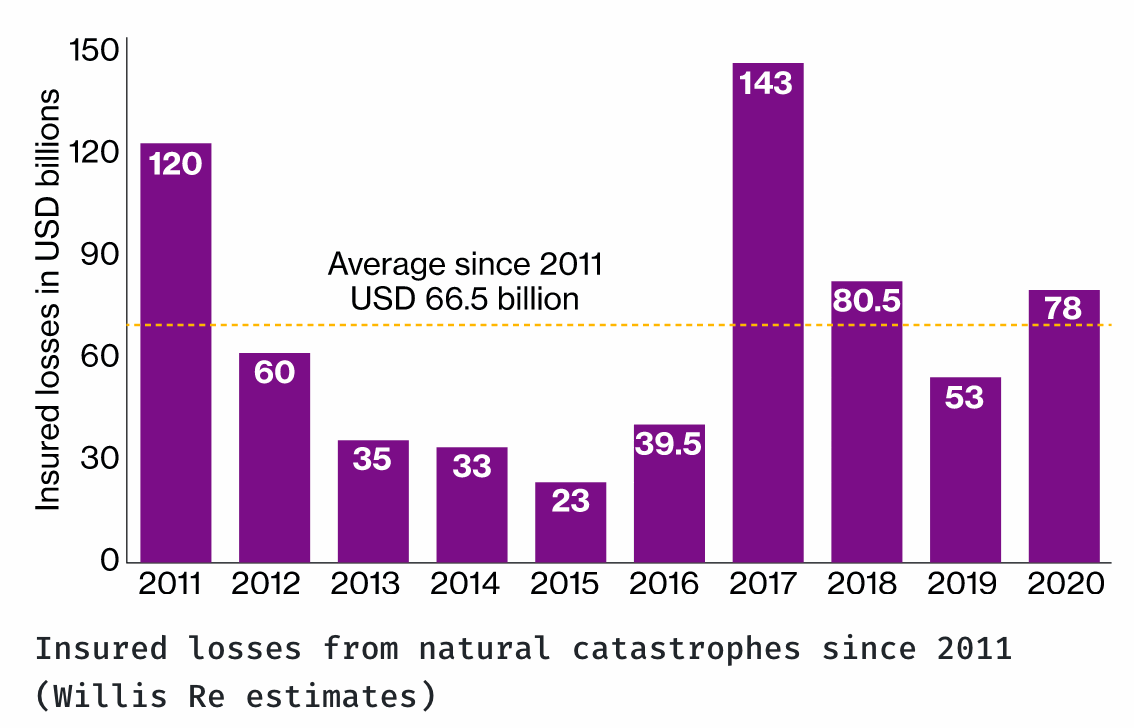 Yingzhen Chuang, Regional Director, Catastrophe Analytics, Willis Re International, explained, “Natural catastrophe losses were high in 2020, but things could have been worse, given the number of storms which formed around the world. Fortunately, despite an active Atlantic Hurricane season, landfalls were limited. Whilst losses in Europe were modest, we did see a number of earthquake events as a reminder of the seismically active nature of southern Europe, as well as severe flooding from windstorms and hailstorm activity. During a year when Covid-19 dominated catastrophe loss discussions, there were nevertheless a series of smaller but impactful natural catastrophe events.”

Vaughn Jensen, Executive Vice President, Catastrophe Analytics, Willis Re North America, added, “A record number of North Atlantic hurricanes formed in 2020, but landfalls did not occur in great numbers, or touch areas with highly concentrated insured exposures. If they had, the story of 2020 would have been dramatically different. However, the sheer number of storms – and the continued incidence of billion-dollar wildfires in the US and elsewhere, plus the severity of the Iowa derecho event – gives the industry cause to consider new emerging trends.”

Alongside Hurricane Laura which caused an insured loss of $8 to 9 billion, other notable events included windstorm Ciara (Sabine) in Europe, which impacted more than ten countries producing nearly $2 billion of insured losses, amongst several other storms –Ines, Dennis, and Jorge – within a two-week period, and Tropical Cyclone Haishen in Asia, which despite its impacts drove less than $1 billion of insured losses.

As a reminder, reinsurance firm Munich Re estimated $82 billion of natural disaster losses that were insured in 2020, while broker Aon said that private sector and government-sponsored insurance and reinsurance programs covered $97 billion of 2020 losses.