Asia, a key part of the ILS market & interest is growing: ILS Asia 2020

The Asia Pacific region has become a key component of the global insurance-linked securities (ILS) marketplace and interest from cedants and issuers continues to surge, according to industry experts. 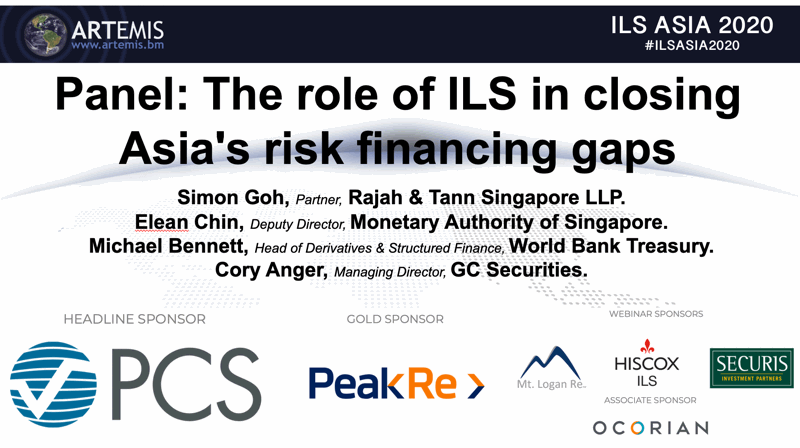 “Whether it be through the representative exposure that comes through on quote shares that investors assume, through sidecar participation, and, more overtly, through collateralised reinsurance or cat bond activity.

“So, the Asia Pacific region is important for investors and it’s actually valued by investors as it’s seen as a diversifier from the U.S risk, which is the most prevalent risk to date, but obviously the APAC region continues to grow,” said Anger.

Assisting the surge in interest in the region is the ILS grant scheme from the Monetary Authority of Singapore (MAS), which fronts 100% of the upfront cost of issuing a deal and which has been extended until the end of 2022.

Singapore has ambitions to become the leading ILS domicile in the Asia Pacific region, and since the introduction of the ILS grant scheme and then the issuance of the first deal out of the domicile, much has changed.

“A lot has changed over the past 18 or months or so. The focus for us is really to see whether we can get more interest from the Asian space, the Asian risk bearers, Asian investors. And, we’ve also seen since the first two 144A deals that we did, interest from particularly the Japanese market, so that has also resulted in the first Asian sponsored cat bond earlier this year.

“So, I think definitely interest has taken a significant turn for the better, over the past two years or so,” said fellow panellist Simon Goh, Partner, Head of Insurance & Reinsurance Practice, Rajah & Tann Singapore LLP.

Rising interest, and especially in the public sector, was also highlighted throughout the panel and notably by Michael Bennet, Head of Derivatives & Structured Finance, World Bank Treasury.

“From our perspective, what’s gone well is a lot of interest. We’ve seen in the last year, and even more so since the Philippine transaction occurred, a lot of interest from clients in the area,” said Bennet.

As well as rising interest from potential public sector entities, Bennet said that interest was also high among the investor community for Asian deals. He explained that the roadshow for the Philippine cat bond included Singapore for the first time, which was the most attended pf the series as potential players sought to educate themselves on ILS.

Expanding on this and Chin’s comments around growing interest in ILS from more and more countries across the APAC region, Anger said: “I think what is going to be exciting is when we have this established jurisdiction in Singapore, and I know Hong Kong is also moving to expand and offer another alternative within the APAC region.

“And, so, I think both of those are very exciting and I think all of that helps encourage cedents and, again, whether we are talking about insurers, reinsurers, or corporate entities, to start thinking about using this protection.”

You can watch this session of ILS Asia 2020 on-demand here.

As well as the on-demand playback, we will be archiving every session from our online and virtual ILS Asia 2020 conference over on our YouTube Channel in the coming weeks.