Subtropical storm Andrea has formed in the Atlantic, heading in the general direction of Bermuda and kick starting the 2019 Atlantic tropical storm and hurricane season in advance of its accepted starting date.

It’s not expected that storm Andrea will strengthen too much, so the threat to Bermuda is not considered significant at this time.

A subtropical depression that had been monitored since last week, forming hundreds of miles to the southwest of Bermuda, the system gained subtropical characteristics and was then named subtropical storm Andrea.

The National Hurricane Center (NHC) said that storm Andrea has a well-defined center.

Currently, storm Andrea has maximum sustained winds of 40 mph with higher gusts and is travelling north at around 12 mph. 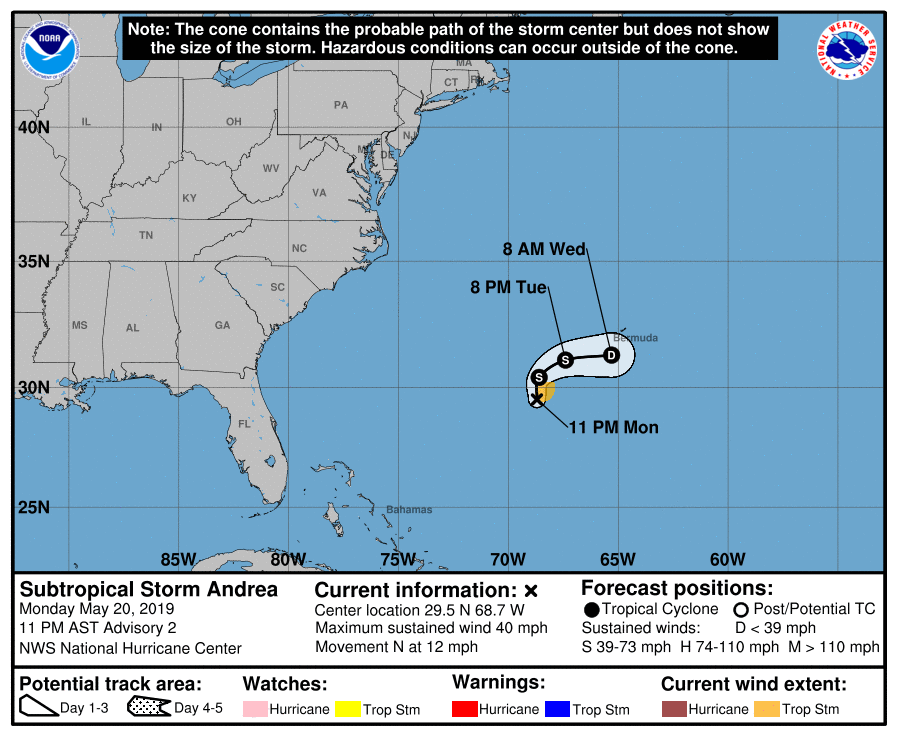 The NHC explained, “A decrease in forward speed and a turn to the northeast is expected on Tuesday, followed by an eastward motion by Tuesday night. On the forecast track, the center of Andrea is expected to remain southwest or south of Bermuda during the next day or two.”

Meteorologists expect that subtropical storm Andrea will actually fizzle out before nearing Bermuda, with the likelihood being that it reverts back into a tropical or subtropical depression.

Full dissipation of the storm is then expected by Wednesday.

As a result there is little threat to Bermuda from this tropical storm, except perhaps for some inclement weather in the coming days as rain bands from what was once storm Andrea head northwards.

Typically the Atlantic tropical storm season is accepted to begin on June 1st, but the climate does not follow strict dates and we’ve seen a number of early storms in recent years.

These early storms serve as a warning of what could be to come and a reminder to ensure preparation plans are ready for the hurricane season.