An earthquake struck around 12 kilometres to the north of Anchorage, Alaska on Friday 30th November, causing widespread damage to infrastructure and an expectation of thousands of minor incidences of property damage as impacts to homes were also widespread, although not expected to result in severe losses. 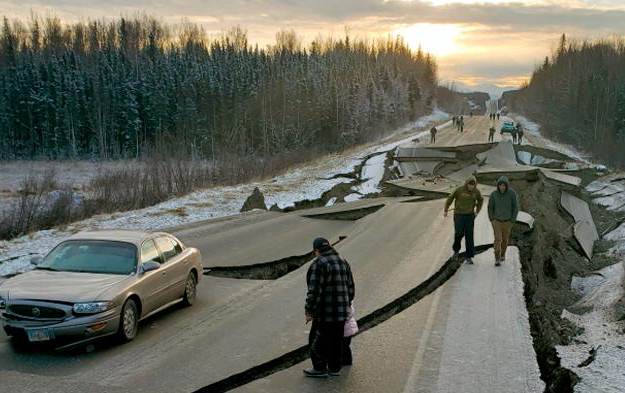 The USGS said there economic costs from the earthquake are expected to well exceed $100 million, with an 18% probability that losses could be more than $1 billion.

The quake struck Friday morning local time at a depth estimated at 44km. The quake itself has been attributed to an intraslab fault in the Pacific slab which has subducted under Alaska. Shaking was severe but the region is used to quakes and hence buildings are developed to withstand a certain level of seismic shock.

The extent of the damage has been much less significant than originally expected it seems, which should put insurance and reinsurance interests at greater ease.

At first it had been assumed that this Anchorage, Alaska earthquake would have generated a significant insured impact, as the early pictures coming out of the affected region showed significant infrastructure damage to roads, bridges and other assets.

But it turns out that the quake wasn’t damaging enough to cause widespread destruction to property, however it is expected to generate thousands of claims due to minor structural impacts to homes and businesses.

Mike West, an Alaska state seismologist, said at the weekend that while he wasn’t aware of “large-scale building collapses” he felt it safe to assume that thousands of homeowners and business owners would find that some damage occurred to their properties as a result of the earthquake.

Many of these incidences will result in property content claims we’d imagine, as structural impacts are expected to be the lesser contributor of any property insurance claims.

The analysts also explained that as standard property policies do not include earthquake cover, they assume a low earthquake insurance take-up rate (about 9-12% for homeowners and higher for businesses) and high deductibles (10-20% of policy limit) in the region.

Earthquake coverage is not widely taken up in property insurance in the region though, we understand, which should minimise the eventual costs that fall to insurance and reinsurance interests.

At this stage it seems the damage will be largely felt by primary insurers operating in the region, given the expectation of economic losses running somewhere up to a billion dollars or so.

Building codes are strong in the region and this could have saved the industry from a larger loss from this earthquake event.

However, the damage to roads and infrastructure has been relatively severe, meaning the economic costs to local and national government entities could be relatively high.

This again shows that governments would find benefits in taking out their own risk transfer to secure funding for rapid recovery from earthquakes and other severe catastrophe events.

The region has been hit by hundreds of aftershock tremors in the last two days, hindering the ability of officials to recover power and repair roads or infrastructure.