Having returned to growth in the fourth-quarter of 2019, alternative reinsurance capital, for deployment into insurance-linked securities (ILS), collateralised contracts and catastrophe bonds, declined 4% to $91 billion in the first-quarter of 2020, as the impacts of Covid-19 further dented already constrained supply, according to broker Aon.

Reinsurance capital had grown strongly in 2019, helped by increased returns on traditional reinsurer equity and then the return to growth of the ILS market in Q4 2019, all of which helped global reinsurance capital reach a new high at $625 billion at the end of last year. 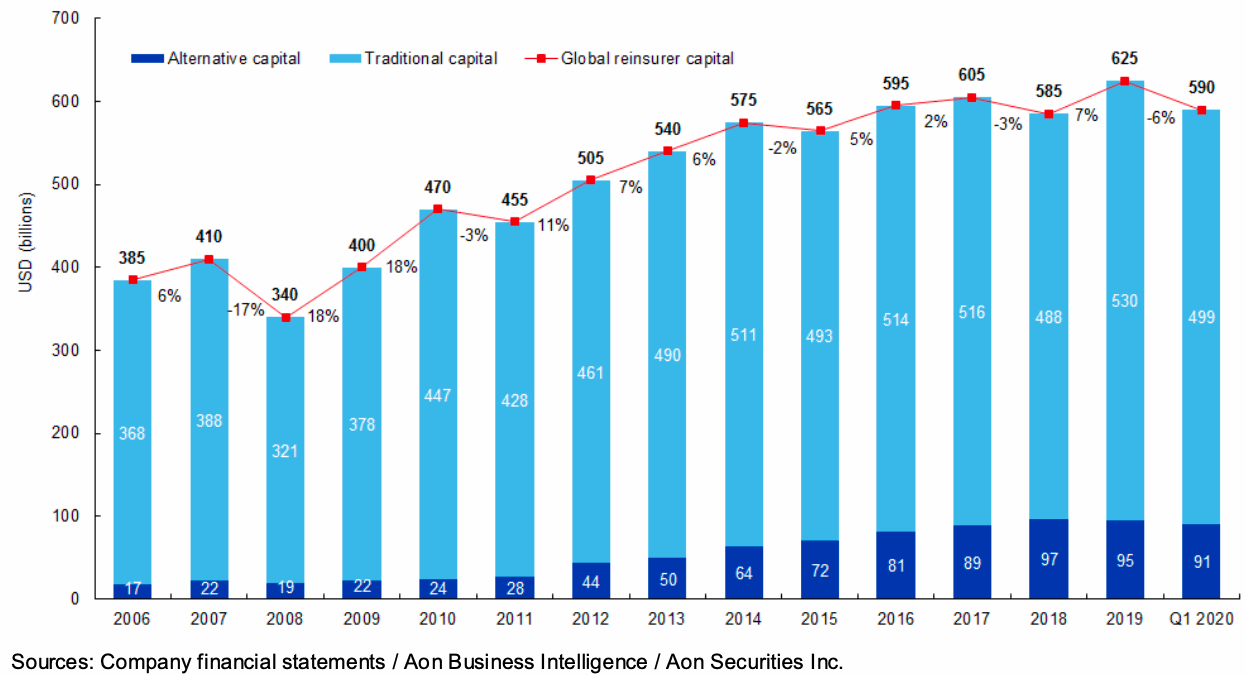 The Covid-19 pandemic is unsurprisingly the significant driver of the decline in reinsurance capital, according to broker Aon.

On the traditional reinsurer side, equity capital fell by 6%, or $31 billion, to end the first-quarter at $499 billion, which Aon says reflects the impact of Covid-19 on both sides of the re/insurer balance-sheet.

Some of this decline may already have been recovered, as Aon is reporting a quarter behind and asset values have helped re/insurers recoup some of the lost balance-sheet value they experienced already.

But at the same time, claims from the pandemic are ramping up and re/insurers are expected to report higher claims levels, in most cases, in their second-quarter results.

On the ILS side of the market, assets under management are estimated to have fallen to $91 billion, with at least $15 billion of collateral still seen as trapped and some of this now attributed to Covid-19 by Aon.

This reduced level of ILS and alternative reinsurance capacity is still affecting the market, Aon said, with the retrocession space the most affected.

Of course, it is going to be later this year that we really see how affected alternative capital is going to be by the pandemic, with the potential for more collateral to be held on contracts due to expire at year-end.

It’s going to be interesting to see how inflows that have been seen counter this, but the outlook does suggest another year of flat to slight declines in overall ILS capital at this time.