Alternative sources of reinsurance and retrocessional capital has contracted by 7%, as investors are being more cautious with making new investments, according to broker Guy Carpenter’s estimates.

The latest figures estimating global reinsurance capital from broker Guy Carpenter and rating agency A.M. Best show that traditional capital has expanded again as 2019 came to a close, but that alternative capital including from insurance-linked securities (ILS) funds has shrunk.

As ever, estimates of available ILS fund and alternative capital are expected to differ significantly among broker reports, as finding an accurate number at the same point in time is challenging and slight deviations can result in significant differences.

Many of our sources suggest ILS capital was actually only slightly down over the entirety of 2019, having started the year dented significantly due to trapped collateral.

But then with some collateral being released throughout the year, while a little more was trapped from fresh catastrophes during the year, but a few ILS funds then managing to raise some new capital in time for the January 2020 renewals, the overall amount of deployable capacity is said to not be too significantly down.

But Guy Carpenter has a good view of the available capital in the space and the company, alongside A.M. Best, believes ILS capital fell 7% by December 31st 2019. It’s not completely clear if this includes all fresh capital raises deployed for 1/1 though, or certain private capital raises we are aware of that may not be as visible even to a large broker. 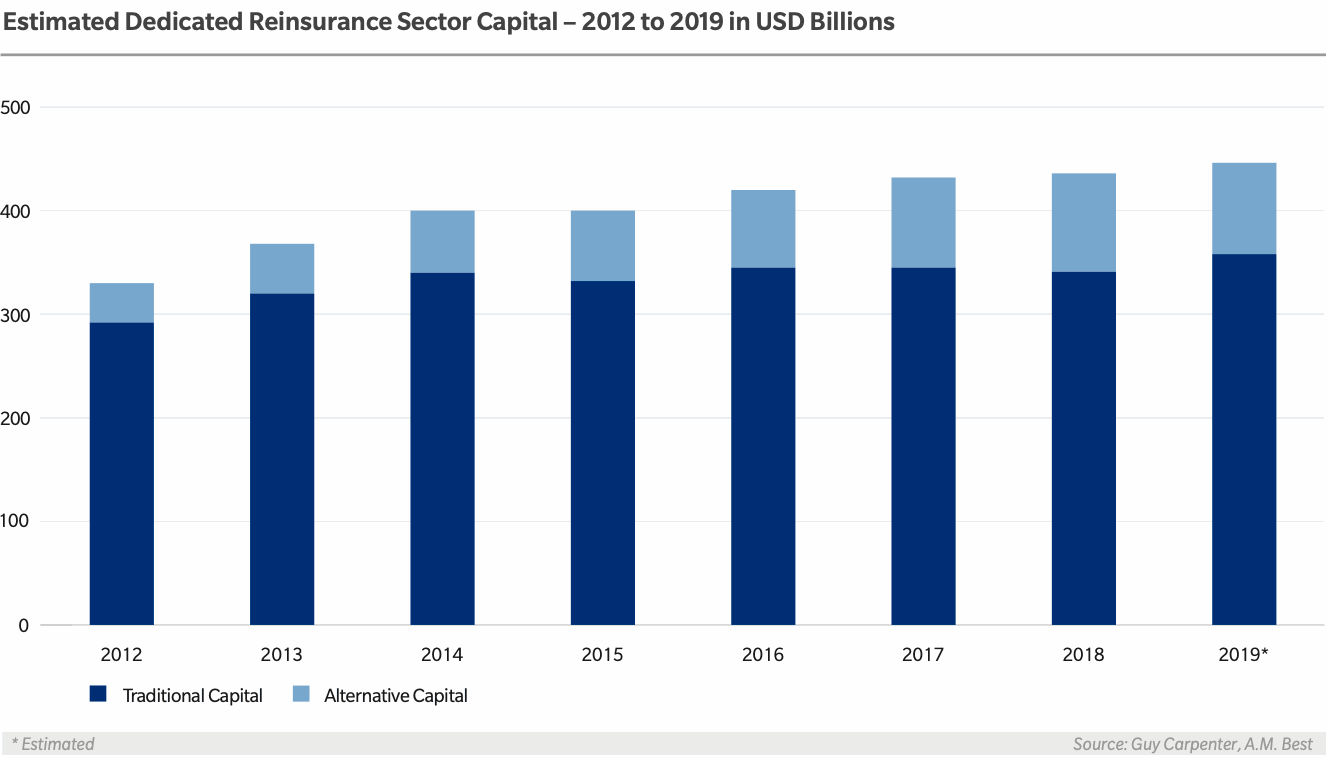 Deployable ILS capital had always been forecast to be down again at the key January reinsurance renewals, so the trajectory is no surprise.

The magnitude of the fall is perhaps more surprising, reflecting higher than expected limits at-risk and collateral trapped from recent catastrophe events, perhaps.

However, with some recent catastrophe events such as typhoon Hagibis from 2019 and perhaps typhoon Jebi from 2018, looking like their eventual industry loss could settle lower than had previously been expected, there is the chance of more capital being released to ILS funds in the coming months.

While the ILS market remains affected by lower capital levels, the market recovery is continuing and realisation of losses will result in some returns of capital to funds, giving them some more to deploy further down the line.

At the same time, ILS funds less affected by the trapping of collateral are also now sitting in a better position to raise more capital as opportunities allow and the recovery continues.

On the end of year run-up to the renewals, Guy Carpenter explained, “Investors were more cautious with new investments after assessing market dynamics and pricing adequacy.”

While the impacts of realised trapped capital that has been lost is factored into Guy Carpenter’s estimates, there is additional trapped collateral included in its numbers.

As a result, the broker said, “When accounting for trapped capital that remains unavailable for immediate deployment due to funding for previous years’ loss requirements, dedicated reinsurance capital was effectively flat compared to a year ago.”

Despite this, the broker said that, “the reinsurance market enters 2020 in a solid position.”

“Capacity will continue to be deployed cautiously, with cedents’ performance and loss experiences scrutinized closely. Yet, the sector remains well capitalized overall and additional capital may be deployed in the coming year should the pricing environment become more appealing to investors,” Guy Carpenter explained.

With rates and pricing seemingly having risen more at the January 2020 renewals than they did a year earlier, ILS funds now stand prepared to reap the benefits of a better pricing environment and this could help to attract further investor inflows over the rest of 2020.

The one wild-card, as ever, will be the occurrence of fresh losses that impact ILS capital in 2020.

Rates have not yet risen to a level where investors and fund managers will feel their capital is being adequately compensated for becoming trapped or lost four years in a row.

Not helping this is the continued growth of traditional reinsurance capital and major global reinsurers ability to deploy it at very low levels of return above expected loss.

Once again, this does seem to have been the moderating factor in rates at this renewal, something that may not go unnoticed by major investors unless the reinsurers can deliver a far more profitable year, which again (like for the ILS market) is largely dependent on levels of catastrophe activity.

← Older article Retrocession rates up as much as 40% in January renewals: Hyperion X