Alternative capital in the reinsurance market shrank by around 4% during the first-quarter of 2019, largely driven by the payment of losses in the collateralized reinsurance space as well as some investor redemptions, according to Aon.

At the same time traditional reinsurance markets expanded their capital base by an impressive 5%, to reach $512 billion at the end of Q1 2019, which was mainly driven by strong earnings and the launch of Stephen Catlin’s Convex Group.

Alternative reinsurance capital finished the quarter at $93 billion, down from $98 billion at the end of the prior year. 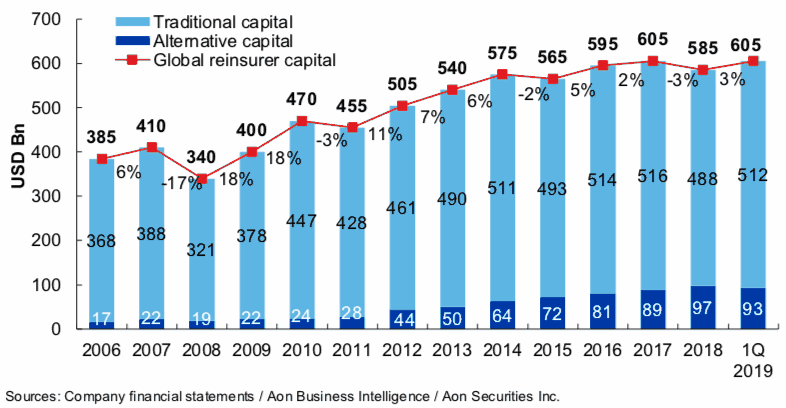 Overall, global reinsurance capital, from traditional and alternative sources, ended Q1 2019 up 3% to equal the record high of $605 billion, according to broker Aon’s data.

The shrinking of alternative capital in reinsurance during Q1 was expected, as the impact of the losses suffered had not really shown in Aon’s data prior to this quarter.

The fact the shrinkage was only -4% is actually quite impressive, given the significance of the losses that have been faced. However, it also reflects the fact that some losses are still to be realised, as a lot of collateralized reinsurance capacity remained trapped and was yet to officially payout by the end of Q1.

It’s taken some time for the true impact of the catastrophe losses of the last two year’s to be realised, meaning there could still be some shrinkage to be recorded for the second-quarter of the year as well. In fact, Aon notes that there remains roughly $15 billion of collateral still trapped by these developing losses.

However, as Aon has previously pointed out, growth is expected to return for the alternative capital and ILS fund market just as soon as the losses are realised.

The losses have hit the collateralized reinsurance market in the main, resulting in most of the dip in alternative capital being recorded there.

In fact, looking at Aon’s chart that breaks down the ILS market into types of capacity, inflows into the catastrophe bond space helped that to continue growing in Q1, while the collateralized reinsurance shrank the most and ILW’s and sidecars remained relatively static.

“Enhancements in model clarity and refinements in contract language are expected to result in the resumption of growth on a more sustainable basis, once recent losses have been fully digested.”