Ceding companies largely expect to maintain their use of alternative reinsurance capital going into 2020, a Moody’s Investors Service survey of protection buyers shows.

While more are expecting to increase their usage, than expect to use less alternative capital.

In total 77% of respondents said that alternative reinsurance capital use would remain core and at around the same levels in 2020, while 18% said they expected to use more and only 5% said they’d use less. 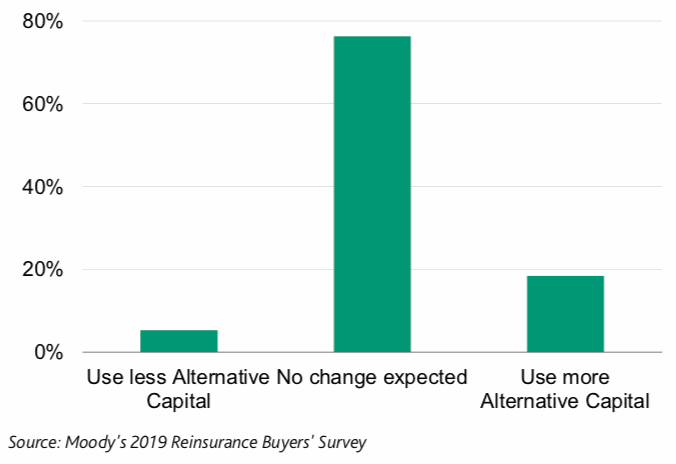 These are positive figures for the insurance-linked securities (ILS) market, as it shows the increasing mainstreaming of alternative capital continues across the insurance and reinsurance marketplace.

“This is consistent with our view that alternative capital will steadily increase as a proportion of overall reinsurance capital,” Moody’s explained.

Interestingly, ceding insurers are increasingly aware that alternative capital exists in the market’s capital stack as well, meaning they are often indirectly exposed.

Moody’s said, “Some cedants said that while they had not intentionally increased their use of alternative capital, they were aware that their indirect exposure was growing, because of growth in their reinsurers’ sidecars.”

It’s hard to say whether the results show greater use of collateralized reinsurance is likely, as the lines between it and other forms of ILS continued to blur, we would say.

“Respondents said they favoured collateralized reinsurance because it participates in profits and losses on insurance exposures in the same way as traditional reinsurance, and therefore eliminated the basis risk present in some other forms of alternative capital,” Moody’s said.

Adding, “In addition, some cedants found collateralised reinsurance to be simpler and more efficient to source and manage than catastrophe bonds.”

But while growth is expected, Moody’s notes that ceding companies are also expected to become increasingly discerning about who they get their alternative capital coverage from.

That will require fresh capital inflows to support it, it seems, given more cedants expect to use more alternative capital coverage, or the same amount, than expect to use less.