US primary insurer Allstate has revealed a significant approximately $1.3 billion gross loss from the winter storms and severe winter freeze, primarily impacting Texas, which it warns mean its aggregate reinsurance will trigger, which is provided by its Sanders Re catastrophe bonds.

Allstate said that the $1.3 billion of gross losses from the winter storms and deep freeze are set to be significantly reduced thanks to reinsurance recoveries.

Net losses from the winter events are estimated at $567 million, pre-tax, by Allstate ($448 million, after-tax), which the carrier says reflects anticipated reinsurance recoveries, but partially offset by reinstatement premiums.

This suggests reinsurance recoveries of somewhere around the $733 million delta between the gross and net, but offset by the cost of reinstatements.

Because of the heavy losses in the month of February, Allstate said that it has “surpassed the retention level of the nationwide aggregate reinsurance cover, with the annual risk period ending March 31, 2021.”

Allstate has not revealed its exact gross aggregate loss for the current risk period year at this time and given the effects of subrogation and previous period recoveries, as well as the fact Allstate reports its catastrophe losses net throughout the year, it’s tough to estimate how far above the trigger point losses have stretched at this time.

However, the sole $300 million Class B tranche of notes from the Sanders Re II 2019-1 catastrophe bond had been marked down for bids as low as 10 or 20 cents on the dollar at the end of last week, suggesting the market was anticipating a loss as high as 80% to 90% of the $300 million of principal.

While investors in the Sanders Re II 2019-1 catastrophe bond look set for an as yet unknown loss of principal, we assume the carrier will let this develop a while longer before reporting the actually losses to holders of the cat bond, it also looks as if Allstate may be able to make some recoveries under its per-occurrence reinsurance arrangements as well.

Given how significant the losses from the Texas freeze and related winter storms have been for the carrier, at around $1.3 billion of gross losses, Allstate’s nationwide occurrence reinsurance attaches at $500 million of losses, suggesting reinsurers and any ILS funds backing the lower layers in that tower will also help the carrier in paying its claims.

You can see Allstate’s occurrence and aggregate nationwide reinsurance towers below. 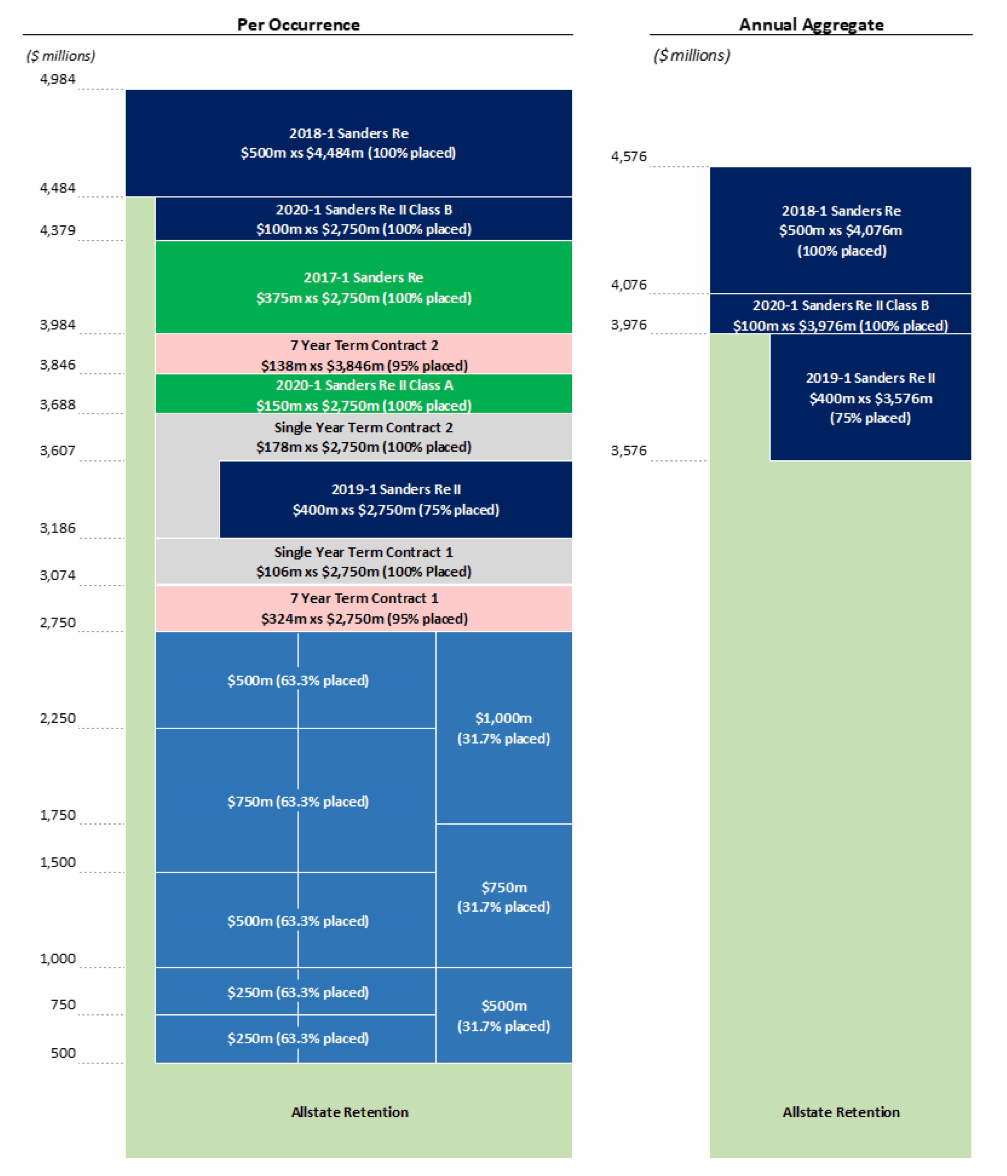 It will take some time for the losses to be finalised and for holders of the Sanders Re II 2019-1 catastrophe bond to fully understand the scale of principal loss faced and development could be prolonged with this winter event, we’d imagine.

With the notes still priced down for as much as a 90% reduction in principal, it suggests the cat bond market could face as much as a $270 million payout to cover some of Allstate’s losses.