US primary insurance giant Allstate has pre-announced a range of items that added up to make the third-quarter a particularly challenging one for the company, but positively for the carrier its reinsurance tower has responded to losses from hurricane Ian and a $305 million recovery is anticipated.

Allstate has pre-announced third-quarter catastrophe losses of $763 million, pre-tax and this will be net of reinsurance recoveries.

In September alone, estimated catastrophe losses net of reinsurance reached $440 million, or $348 million after-tax, roughly 80% of which were related to hurricane Ian.

However, the insurers said that this figure will be reduced by $305 million thanks to anticipated reinsurance recoveries, for a net estimated loss of $366 million from the hurricane.

So what does this mean for Allstate’s reinsurance partners?

Well, the loss from hurricane Ian falls to Allstate’s specific Florida excess-of-loss reinsurance tower, which the company renewed earlier this year and features a number of Florida-focused Sanders Re catastrophe bonds.

With a $671 million gross loss reported from hurricane Ian, that is being reduced to $366 million after the expected $305 million in reinsurance recoveries, we can make a reasonable guess at where the loss rises to in Allstate’s Florida catastrophe excess-of-loss reinsurance tower. 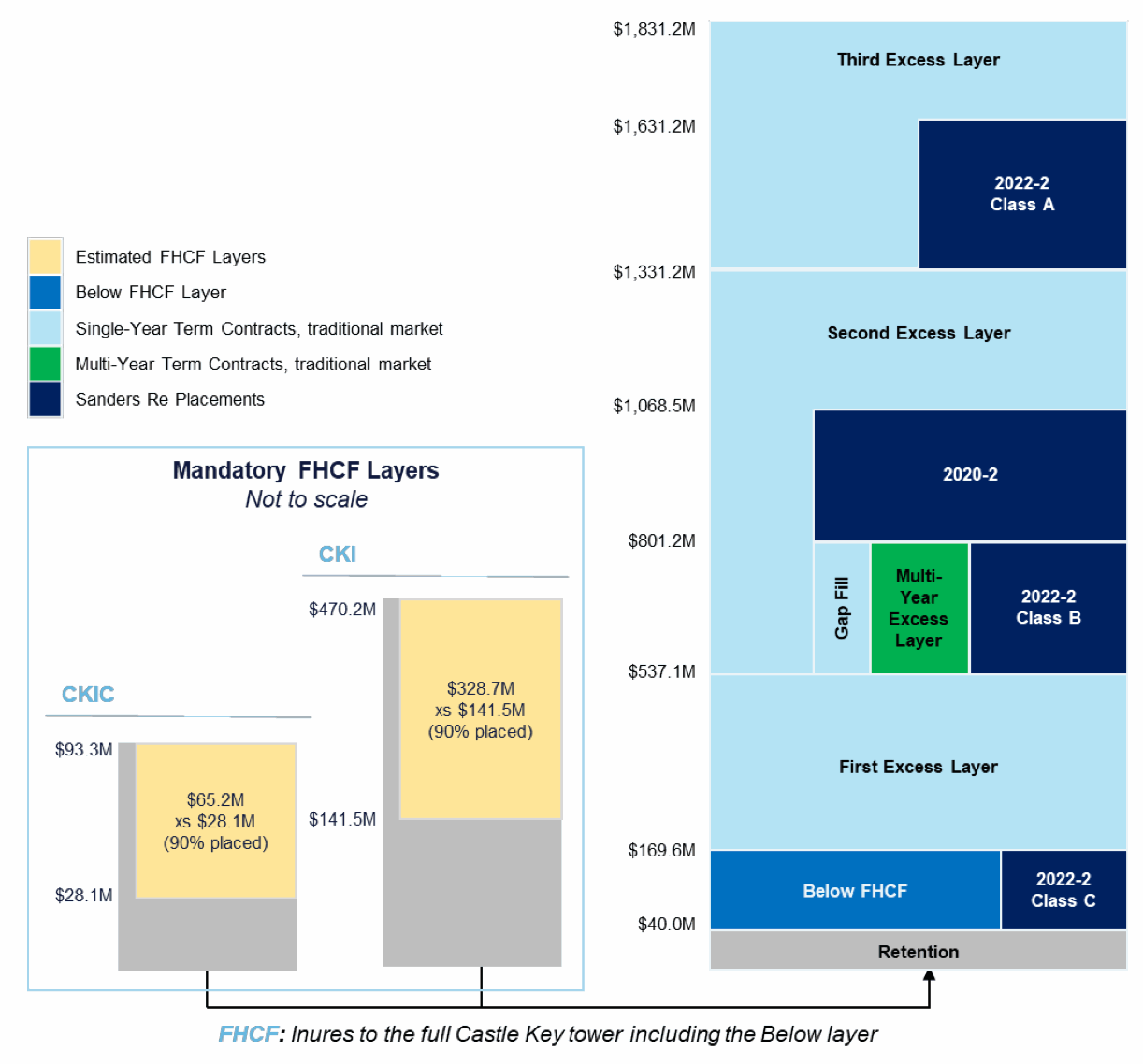 You can see Allstate’s Florida reinsurance tower to the right, click it for a larger version.

At the bottom of that reinsurance tower diagram you can see the $40 million retention layer.

But immediately above that is one of the riskiest catastrophe bond tranches Allstate has ever sponsored, the $37.5 million Class C tranche of notes from its most recent issuance, the Sanders Re III Ltd. (Series 2022-2) deal.

Now, it’s important to note here that Allstate’s Florida cat bonds only provide it with reinsurance for personal lines property losses, with no exposure to auto. As a result, we’re making some assumptions here, as we do not know the full split of property versus auto on a gross basis.

However, we can assume this Class C tranche of Sanders Re III 2022-2 cat bond notes will be exhausted after hurricane Ian, with investors set to lose all of the principal to Allstate’s reinsurance recoveries.

It’s worth noting that this Sanders Re III 2022-2 Class C tranche of notes were zero-coupon in nature, have just a one-year term and came with an expected loss of 17.43%, so were seen as a very low-down layer of risk and so would be considered very exposed to any significant Florida hurricane event.

Looking at cat bond pricing sheets, those that this tranche of notes appear on have largely marked it down as expected to face significant, or total losses. Allstate’s announcement confirms that is the expectation.

Above that cat bond is a wide excess layer of reinsurance that provides $367.5 million of limit and exhausts at $537.1 million.

With the gross loss from hurricane Ian reported at an estimated $671 million, it seems the losses could eat right through this layer of reinsurance support. However, not knowing the split, in terms of auto and property on a gross basis, it is hard to tell.

Directly above that is another catastrophe bond tranche, the $100 million Class B tranche from the same Sanders Re III Ltd. (Series 2022-2) cat bond issuance.

Those notes provide a share of reinsurance cover across  a layer attaching at $537.1 million of losses to Allstate and exhaust at $801.2 million, so at this stage, with the information available, it seems possible Allstate’s gross losses could attach this second tranche of cat bond notes, although we cannot currently be certain.

Right now, it seems this Class B tranche would not face a total loss, rather a percentage of the $100 million of limit may be due to Allstate in reinsurance recoveries.

The $100 million Sanders Re III 2022-2 Class B tranche of notes are marked down for possible losses on cat bond pricing sheets, with them marked-down roughly 25% to 50%, depending on the sheets you look at.

So, some Sanders Re catastrophe bond losses are to be expected from hurricane Ian, as Allstate benefits from its robust reinsurance coverage once again. However, it’s difficult to know precisely how much.

Allstate’s aggregate catastrophe bonds do not provide coverage for loss events in Florida, so they will not be exposed to hurricane Ian.

At this stage, it is challenging to know exactly how much in the way of losses cat bond investors face, given the notes don’t cover auto and Allstate’s disclosure does not explain how losses are split out on a gross, before reinsurance, basis.

The lower down Class C layer seems almost certain to be a total loss though, it is the higher Class B layer which is harder to define a loss quantum for, if any, at this stage.