Weather forecaster Accuweather say that the conditions in the Atlantic basin are becoming conducive to tropical storm formation and that we can expect to see a number of named tropical storms form in the near future. The next week, they say, will contain a minimal threat of hurricane landfall to the U.S., but after the 17th they say the risk grows considerably. 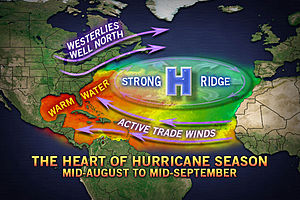 This will allow tropical storms to have a chance of making landfall anywhere along the U.S. coastline from the eastern Gulf of Mexico to the Atlantic coast.

The other factor which points to an intensification of storm season is the increasing tropical waves forming in the western Atlantic and destined to head across towards the Caribbean and U.S. Conditions are becoming much more conducive for formation and intensification of these waves and Accuweather say that they expect at least one of these waves to become a named storm next week and there is a chance of it heading for the U.S. coast towards the end of next week. 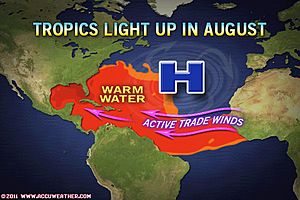 Another Accuweather article suggests that the conditions are becoming so ideal for storm development that we could see three more named tropical storms by the 25th August. Active trade winds and warm currents in the Atlantic provide the perfect formula for storm formation and tracks to head towards the Caribbean and U.S. which is a much more typical seasonal weather pattern to see, although one that wasn’t obvious last year.

Combine these factors with the removal of the high pressure over the U.S. and we suddenly see the conditions become the most conducive for landfalling tropical storms for a couple of years (last year was dominated by shifting trade winds, jet stream and high pressure).

However, this window of higher risk may not last as some longer range forecasts predict the return of high pressure across the U.S. at the end of August.

Right now there are three tropical disturbances in the Atlantic, two of which have a 30% chance of developing further according to the NOAA. You can follow the progress made by these disturbances on our 2011 Atlantic Hurricane Season page.