The 2012 Atlantic tropical storm and hurricane season has so far been benign, with no real threat to the U.S. coastline from any major storms and the season thus far causing no impact to the reinsurance or catastrophe bond sector. Sometimes hurricanes can surprise us though and the path of hurricane Gordon over the last few days has shown that tropical storms can be unpredictable and we should never become complacent no matter how benign the season might seem.

Gordon formed as a tropical storm last week in the mid-Atlantic and rather than follow the normal paths with a generally west or northwest motion, Gordon decided to set off towards Europe. Gordon intensified over the weekend and became a hurricane on Saturday and then attaining category 2 hurricane status on Sunday as it continued to head north and east towards Europe.

Earlier today hurricane Gordon came very close to the Azores, causing minor damage and some coastal flooding to the two most eastern islands of the Portugal ruled archipelago. The islands are a tourist destination at this time of year and the coast is relatively built up meaning that a direct hit from a category 2 storm could have been a meaningful loss event. As it happened Gordon weakened slightly as it approached and only gave the islands a glancing blow.

It is very unusual for hurricanes to move east and even more so for that to happen while the storm is still developing. It is not so unusual for a hurricane or tropical storm to travel west or northwest before making a turn to the north and the east, that happens quite often but the storms are usually weakening as they travel east.

What is particularly unusual here is that the last time the name Gordon was used for a hurricane it nearly struck the Azores as well. That was in 2006, when another storm unusually travelled east, and became hurricane Gordon. The map below from Accuweather shows the similarity between the two Gordon’s paths. 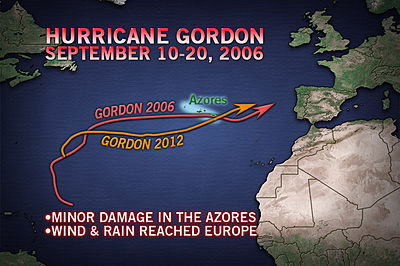 Hurricane Gordon from 2006 went on to cause some problems in Europe, bringing high winds and heavy rains to much of western Europe. The 2012 edition of hurricane Gordon is not expected to have a severe impact at this time. Forecasters don’t expect Gordon to bring too much moisture as far as Europe and the winds will have weakened to depression levels by the time it reaches the continent.

Storms like Gordon should serve as a warning that there can be severe storms with tropical characteristics which have the potential to threaten Europe. Often Europe concentrates on the winter windstorms for which it is better known, but storms like the two Gordon’s should serve as a reminder to the reinsurance sector that the unusual can happen and the Atlantic should be watched for all eventualities.

Meanwhile the Atlantic basin has a number of disturbances in it which could become tropical storms over the next day or so, it is beginning to show signs of increasing activity and we expect the next names tropical storm, Isaac, will form soon. Follow the storms development on our dedicated page for the 2012 Atlantic hurricane season.