$218 billion in economic losses, $43 billion in insured losses from natural catastrophes and man-made disasters in 2010

Swiss Re have today published their latest Sigma report which looks at the toll suffered around the globe from natural catastrophes and man-made disasters during 2010. The report shows that losses were exceptionally high in 2010, particularly for a year when the Atlantic hurricane season (one of the biggest loss events on many years) caused so few losses.

Worldwide economic losses from natural catastrophes and man-made disasters totalled $218 billion in 2010 which is more than three times as much as in 2009. The insured loss total which the insurance industry was liable for was more than $43 billion, more than 60% up on 2009. Approximately 304,000 people died due to these events, the highest figures since 1976.

The number of lives lost was significantly higher than the 2009 figure of 15,000. The Haiti earthquake in January 2010 caused more than 220,000 deaths, close to 56,000 people died from the heatwave in Russian during the summer and flooding in China and Pakistan killed over 6,200 people.

Natural catastrophes cost insurers around the world around $40 billion in 2010 while man-made disasters cost insurers another $3 billion. In 2009, overall insured losses came to $27 billion. Lucia Bevere, one of the study’s authors, says: “Insured losses were highest in North America in 2010, where they exceeded USD 15 billion. Despite very low hurricane losses due to the absence of hurricanes making direct landfall in the US, a series of lesser storms throughout the year resulted in this high figure.”

Looking at those figures for economic and insured losses from 2010, it is clear to see that 2011 is going to transpire into a year of near record losses for the global insurance industry. With reports citing $300 billion in economic losses and $30 billion of insured losses from the events in Japan alone, 2011 is likely to eclipse 2010 as far as financial losses go.

Earthquakes caused a large proportion of losses and deaths in 2010, with Haiti, Chile and New Zealand most affected. Balz Grollimund, one of the study’s authors, says: “Although no long-term trend of increasing global earthquake activity has emerged, the number of fatalities and insured losses from earthquakes are on the rise. The main reasons are population growth, the higher number of people living in urban areas as well as rising wealth and rapidly increasing exposures. Many of these rapidly growing urban areas are located in seismically active areas.”

There were ten events which caused over $1 billion in insured losses during 2010: 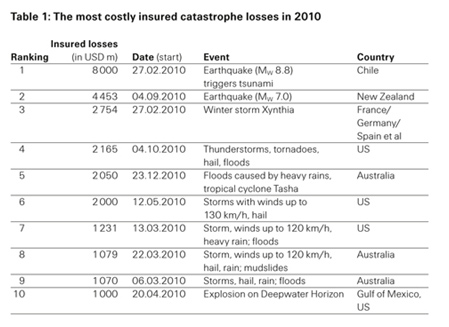 Thomas Hess, Chief Economist of Swiss Re, comments: ”2010 was not only characterised by severe earthquakes that ranked among the deadliest, costliest and most powerful in history, but also by a series of extreme weather events, such as major floods. Some of these flood events sadly affected countries with poor emergency preparedness and underdeveloped insurance markets.”

Hess continues: “These events show the urgent need to strongly improve prevention and post disaster management in order to reduce human suffering. The rapidly increasing wealth in emerging markets should also be used to address these problems. This wealth will also allow insurance to grow and close part of the large insurance protection gap in many emerging markets, the main reason why the financial protection against catastrophes is low in most emerging markets.”

Here you can see the trend for insured losses from catastrophes and disasters by year since 1970. It’s likely that 2011 will spike well above the average: 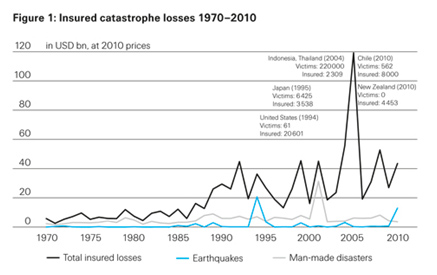 You can download and read Swiss Re’s full Sigma report on Natural catastrophes and man-made disasters in 2010: a year of devastating and costly events.