U.S. insured losses from winter weather, convective storms and floods have reached $7.4 billion in 2016 already, according to Steve Bowen of Impact Forecasting, a total that will likely rise further with this week’s weather-warned storms and as we enter peak season for severe thunderstorm risk. 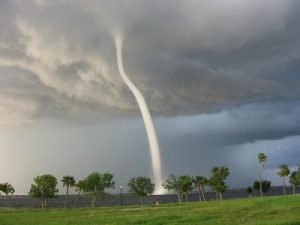 The latest data from Impact Forecasting, the catastrophe risk modelling and analytics arm of reinsurance broker Aon Benfield, shows that so far in 2016 the U.S. has suffered an estimated $7.4 billion of insurance and reinsurance industry losses, due to natural catastrophe and severe weather events.

On an economical basis, Impact Forecasting estimates that the United States has suffered a $13.05 billion financial impact from severe weather so far this year, which suggests that only 56% of the economic loss has been covered by insurance and reinsurance.

The $7.4 billion total breaks down into $0.81 billion of insured losses due to winter storms, $0.42 billion due to flooding and the vast majority, $6.17 billion due to severe convective storm impacts from thunderstorm, tornadoes, hail and damaging winds.

Steve Bowen, Director & Meteorologist at Impact Forecasting, explained to Artemis; “As it stands now, the US has incurred around $7 billion in insured losses this year – and rising.

“Most of the losses are attributed to the severe convective storm peril at roughly $6 billion. As we have all seen, Texas has been particularly hit hard. The last five week stretch alone has likely registered insurable thunderstorm losses that will approach $4 billion.”

And the total could have been significantly higher if flood insurance penetration was greater in the U.S., with the Houston floods not estimated to have resulted in a particularly significant loss, although it does remain early days for estimating the impacts of that event.

“The total could have been even higher following the Houston flash flood event if there was greater NFIP penetration. While the Houston metro region boasts one of the highest NFIP participation rates in the country, there are still a high number of homeowners and commercial interests who are either non-insured or underinsured,” Bowen explained.

Recent weeks have seen a number of severe convective weather outbreaks, hitting Texas with a rising economic and insurance loss. As we wrote yesterday, the losses being announced by large primary insurance group’s appear outsized for their market share, suggesting that the early estimates for losses from Texas hail storms would be eclipsed.

With Impact Forecasting suggesting that the total insurance loss from recent weeks convective storms and hail is now likely over $4 billion, it seems assured that reinsurance markets and some ILS funds or sidecars will help to soften some of this blow.

How much remains to be seen, but we are already hearing that a number of ILS fund managers and reinsurer owned sidecars are set to make allowances for an expected attritional level of loss due to the severe U.S. weather of recent weeks.

The outlook for this week suggests further severe convective storm activity for the United States, with weather warnings in force and a forecast for a moderate risk of severe convective activity today across the Southern and Central Plains, with activity possible through the remainder of this week as well.

Bowen continued; “As we are now entering the peak severe weather season – and the current forecast for this week showing the strong chance of a significant severe weather outbreak – the financial toll from the SCS peril will only grow. Insurable severe convective storm losses in the United States have topped $10 billion during every year since 2008, and 2016 seems well on its way to continuing that streak.”

Significant severe thunderstorms will be possible across parts of the southern and central great plains this afternoon into the nighttime hours. Tornadoes…some strong…will be possible…in addition to very large hail and damaging winds. Additional isolated strong to severe storms are possible across parts of the Ohio valley to the middle Atlantic coast region.

So the insurance and reinsurance bill could likely continue to creep higher over the coming days.

Despite the level of insured losses seen from convective and severe thunderstorms so far this year in the U.S., the actual number of tornadoes recorded remains below average. This, along with the significant contribution to the loss estimates from hail, shows that the convective weather threat to insurers is more than just tornadoes alone.

It’s important to note, of course, that these loss estimates remain preliminary and will be subject to change as it can take weeks or months for losses to be fully understood and quantified.