Just a few days after we wrote about the still-apparent protection gap, between economic and insured losses, due to typhoon Soudelor, figures from China show that on flood events the gap is as wide, with $18.4 billion of economic loss due to flooding in 2015 so far. 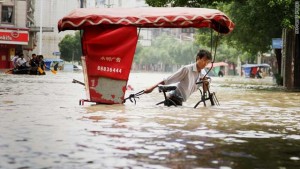 China has a huge and growing economic exposure to flooding, with river flooding, extreme rainfall and storm surge from typhoons, all combining with rapidly rising property values, assets and population, while at the same time insurance and reinsurance penetration is rising more slowly.

In fact it almost seems like the gap is widening, rather than narrowing which the industry would prefer to see, but this is likely due to the rapid acceleration in development of Chinese residential and industrial property in recent years. It’s been so fast that it will take a little time for insurance and reinsurance coverage to catch up.

In 2015 alone China has now suffered an enormous direct economic loss of 117.6 billion yuan from flooding, either through severe rainfall, storms and typhoons. That converts to around $18.4 billion, a figure which will rise further throughout this year given the likelihood of further typhoons and the potential for rainfall triggered by El Niño.

These numbers are another example of the protection gap and the need for greater insurance penetration in China, and similar countries. As well as the requirement of access to efficient reinsurance capacity or the capital markets, to transfer peak risks over to, which is a necessity in order for fully functioning local markets to develop.

Given the pressures that insurance and reinsurance markets face in developed and established regions, such as the U.S. and Europe, you would think that efforts to close this gap down would be increasing. And they are, but the cultural, regulatory, governmental and societal differences can make these efforts much slower than would perhaps be hoped for.

The $18.4 billion of economic losses from flooding in China in 2015, translates into direct impacts affecting a staggering 59.32 million people in 29 provincial regions, according to Zhang Jiatuan of the Chinese State Flood Control and Drought Relief Headquarters. In total, there has been flooding in 154 cities this year in China, affecting 255m people.

While these numbers are huge, Zhang said that this is less severe than in previous years, while the death toll of 232 lives lost and 55 still missing is actually the lowest in history.

Fujian, Jiangsu and Zhejiang provinces were the worst hit by flooding so far in 2015, all of which are located on the Pacific coastal side and have been affected by the very active typhoon season seen this year.

In fact, the four typhoons which have made landfall in China to date in 2015, the most recent of which being Soudelor, have caused one-third of the total flooding economic losses.

$5.47 billion, or 35 billion yuan, of economic losses have occurred from the four typhoons, with over 1 million people affected in 11 provinces, according to Zhang.

“Typhoons that landed in China have caused significant economic losses this year, even though the number of people affected has decreased by nearly 45 percent compared with the same period in the years since 2000,” Zhang is quotes as saying by the China Daily.

In terms of the insurance and reinsurance industry impact from these flooding events and the typhoons, it has been minimal, further highlighting that insurance penetration remains lacking across China.

For example, typhoon Chan-hom which struck the Shanghai region in July is thought to have caused around $2.2 billion of economic loss, but an insurance industry loss of just $325m.

Meanwhile the most recent typhoon Soudelor is estimated to have caused an economic loss of at least $3.2 billion, but the early insurance loss estimates suggested something far lower, perhaps even below $100m as the region it struck has lower insurance penetration that the area Chan-home targeted.

When you consider that the figures for these typhoons includes all losses, so wind damage as well as flood, it’s likely that of the $18.4 billion of flooding economic loss perhaps just a few hundred million will ultimately be paid for by insurance and reinsurance.

There is a clear opportunity to be present in countries like China to help to narrow this protection gap, enabling more rapid reconstruction and recovery from natural disasters and weather catastrophes. That is what the insurance and reinsurance industry does so well and as the gap persists the opportunity is becoming clearer.

The opportunity is also clear for the capital markets, who could provide the risk capital to support and enable new or growing insurance markets to flourish.

Perhaps embracing new, more direct and efficient ways to channel risk capital to the insurance customer, such as we’re beginning to see in the U.S., might be a way to accelerate insurance uptake in catastrophe and weather prone regions. Perhaps also parametric insurance and reinsurance solutions may make more sense in culturally different insurance markets, where indemnity protection can often be understood very differently to in established re/insurance markets.

As property catastrophe and commercial property insurance markets become increasingly competitive in regions like the U.S. that are saturated with risk capital, it will naturally look for new regions to be put to work in.

Risk capital will be spoilt for choice, in terms of new regions to be put to work. While the efforts to get established in new regions of the world may be greater, the rewards may ultimately be more than worth the hard work.