Global insurance and reinsurance giant Zurich has detailed some changes to its reinsurance program at the end of the first-half of 2022, with its global catastrophe treaty expanding in terms of coverage, while in Europe its’ retention has dropped.

Also in its half-year reporting today, Zurich revealed another increase in the amount of premiums it has ceded to reinsurance and retrocessional capital sources, with the figure increasing 7% year-on-year, implying a greater reliance on risk capital in the first-half.

The amount of cover provided by Zurich’s global cat treaty reinsurance arrangement has now risen to $1.2 billion, across Europe, the US and rest of the world, covering all perils.

The other details of Zurich US and rest of world towers haven’t changed, but in Europe the regional cat treaty has shrunk, from $437 million of limit down to $398 million, while at the same time the retention has dropped to $434 million, down from $476 million, implying a higher attachment probability for European major cat events.

Zurich’s latest group catastrophe reinsurance program, after the mid-year renewals of 2022, can be seen below:

The same towers as of the beginning of the 2022 underwriting year can be seen below, so you can clearly see the changes that have occurred around the mid-year renewals: 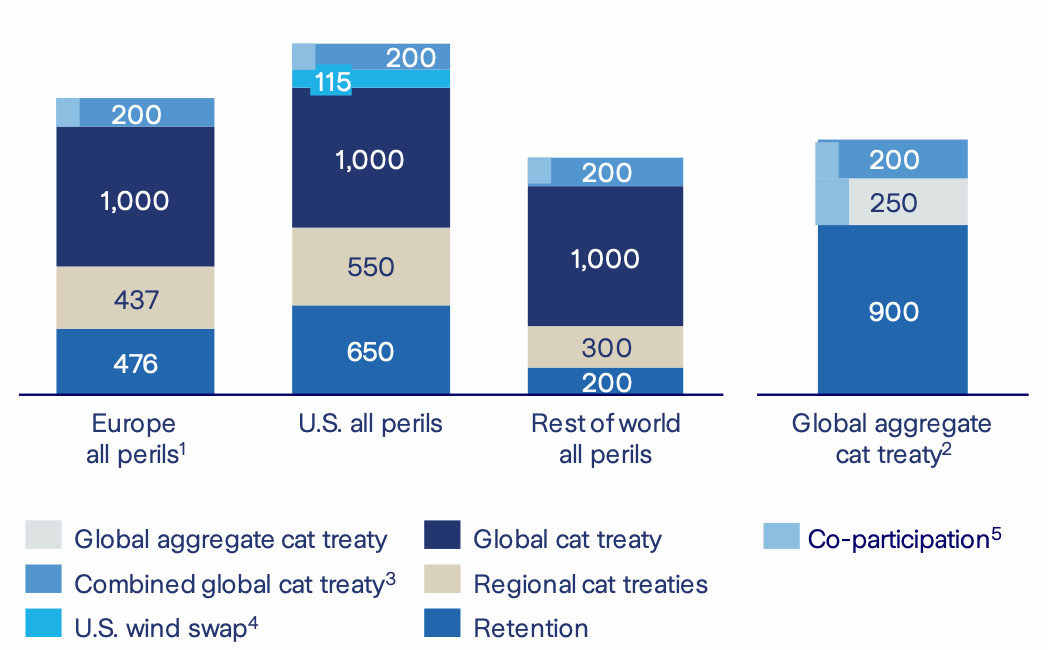 The changes to the global cat treaty more than cover the reduction in regional treaty for the European catastrophe reinsurance tower, which now extends to $2.232 billion, with less retention, up from $2.113 billion.

Reinsurance is increasingly key for Zurich and the re/insurer has been leaning on risk capital providers increasingly heavily in recent years.

This trend has been evident for a couple of years now, as Zurich ceded US $8.6 billion of property and casualty (P&C) premiums to reinsurance and retro partners over the full-year 2020, which was 10% up on 2019.

Then, in the first-half of 2021, Zurich ceded almost $5.7 billion of premiums to its reinsurers, up 10% from the just over $5.2 billion ceded in the previous year.

Full-year 2021 results revealed that Zurich had ceded US $9.2 billion of property and casualty (P&C) premiums to reinsurance and retrocession providers, an increase of 7% over 2020.

Now, Zurich’s latest set of results show that in the first-half of 2022 premiums ceded to reinsurers reached nearly US $6.1 billion, another 7% increase on H1 2021’s almost $5.7 billion.

After making significant reinsurance recoveries in 2021, it seems Zurich’s reliance on reinsurance has increased if anything, judging from the increased limit secured for the global cat treaty and growing cessions of premiums to its reinsurance capital partners.

In P&C re/insurance, premiums ceded reached US $5.341 billion for the first-half, up from $4.92 billion in the prior year.

With the increased size of the reinsurance towers this trend may continue, especially as global weather and catastrophe losses continue to be experienced above budget, despite dropping on the prior year.

This morning, Zurich reported its highest first-half business operating profit since 2008 and the second highest ever, with improvements in its combined ratio as well, which in P&C dropped to a new low of 91.9%.