Property and casualty insurers in the United States are facing record levels of first-quarter catastrophe losses due to the severe winter weather associated with winter storm Uri, rating agency Fitch has said.

Extensive property damage was seen during last week’s severe winter weather in Texas, Louisiana and other southern states of the U.S.

All of this is expected to pressure near-term insurer results, Fitch believes, although it notes that the losses are likely to be most concentrated with the large homeowners carriers, which in the main have very effective claims resources and are also well capitalised to absorb short-term volatility from significant catastrophe events.

At this stage the reinsurance impact is harder to define, given the uncertainty over how high the eventual industry loss from the winter weather will be, as well as how it will affect aggregate reinsurance, quota shares and excess-of-loss treaties.

Fitch Ratings believes that, given the widespread scale and claims volume from the winter storm event, the ultimate insurance industry loss is likely to range between $10 billion and $20 billion.

As we explained last week, catastrophe risk modelling specialist Karen Clark & Company updated its estimate for insurance and reinsurance market losses from the winter storm event in the United States to $18 billion.

Meanwhile, rating agency A.M. Best said that the catastrophe losses suffered in Texas from the US winter storm may reach record levels, which suggests that the estimates of significant insurance and reinsurance market losses are likely to come true.

We also explained yesterday that while winter storm Uri threatens any exposed aggregates that are well into their annual risk periods, as well as quota shares, the overall ILS market impact may not be overly significant given the expected commercial focus of many of the claims.

Fitch notes that U.S. industry first-quarter catastrophe losses have averaged $4.6 billion over the last 10 years, with a high of $7.6 billion in 2017.

As a result, 2021 is set to run far above average for this period, thanks to this winter storm event.

As the winter storm and severe weather associated with it was spread across tens of states and impacted a very wide area, Fitch believes that a large number of individual insurance carriers are likely exposed to losses from these events.

Interestingly, Fitch believes that the commercial mix issue may not be as clear-cut, as in Texas it feels homeowners losses will be the largest share, followed by auto and commercial lines.

That suggests the impact to the ILS market is also not that clear, given its exposure will be higher for a higher homeowners line focused catastrophe loss event.

Fitch explained that, based on 2019 direct premium volume, the largest homeowners insurance underwriter in Texas and Louisiana combined is State Farm Mutual Insurance Group (19.6% market share), followed by The Allstate Corporation (13.6%) and USAA (9.4%). The chart below shows the market share across Texas and Louisiana, two of the most affected states by the winter storm. 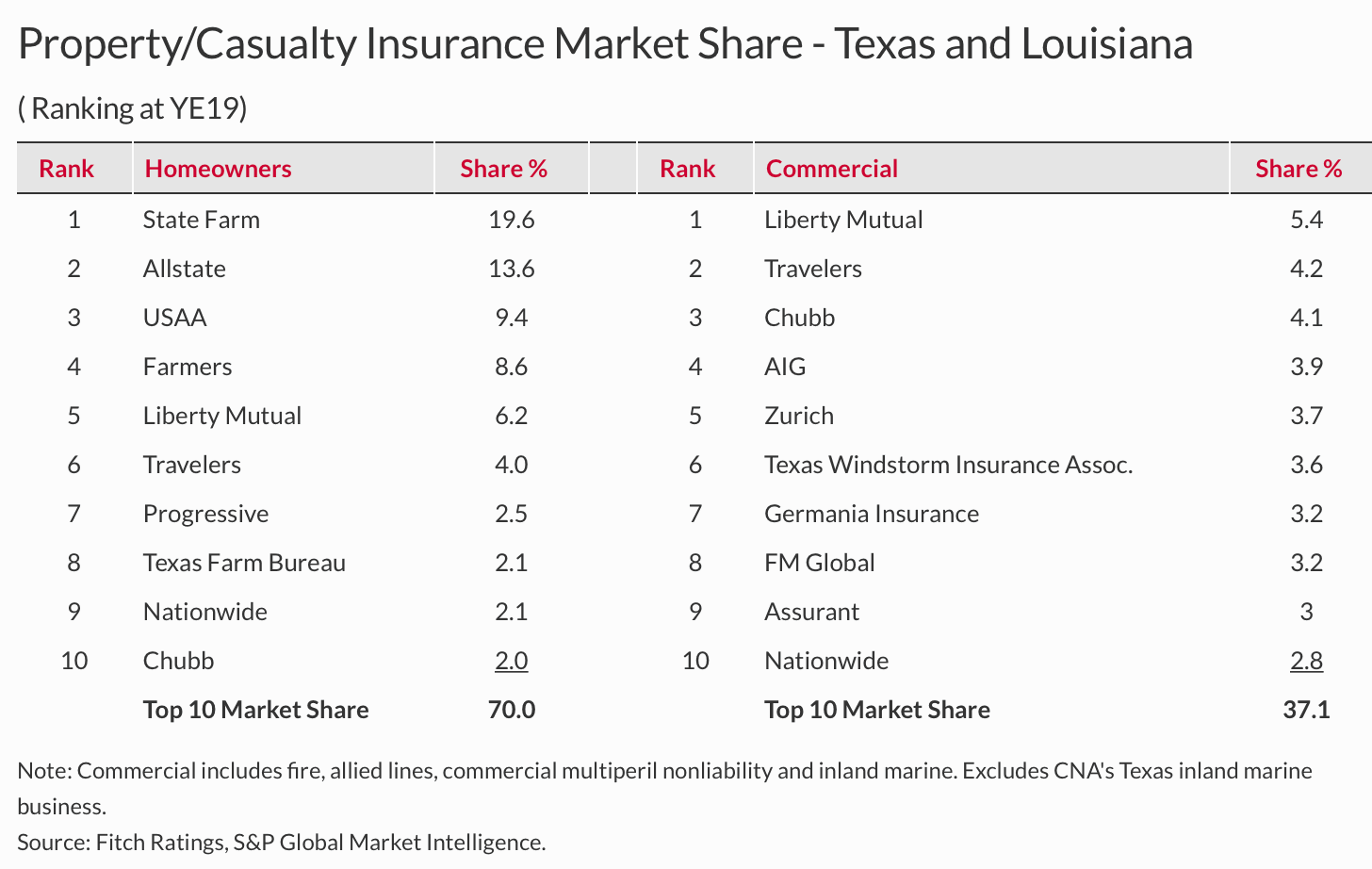 The heavy first-quarter catastrophe loss toll that winter storm Uri will drive is expected to inhibit carrier performance for 2021.

But Fitch notes that their ultimate results hinges more on tropical storm and wildfire activity as the year progresses.

We shouldn’t forget the convective storm season either, as this also has the potential to elevate carrier losses through the season that begins in earnest later this quarter.