Winter storm Jonas, the first severe such storm of the year, will strike the U.S. in the coming days, with impacts expected from the mid-South and Ohio Valley to the East Coast. Many metropolitan areas will see heavy snowfalls, high winds and there is the potential for coastal storm tide and surge flooding.

So the industry needs to keep a close eye on winter storm Jonas as it develops in the coming days. Meteorologists have been tracking this storm closely, with some suggesting it could be one of the worst on record to hit such a wide, highly populated and developed area.

So onto the forecast impacts from winter storm Jonas.

As much as two feet of snow is expected in some areas, with ten or more inches perhaps widely spread through the U.S. east coast metropolitan areas. However it’s currently uncertain how far north this will extend, although the National Weather Service has a blizzard watch out for the New York area now. 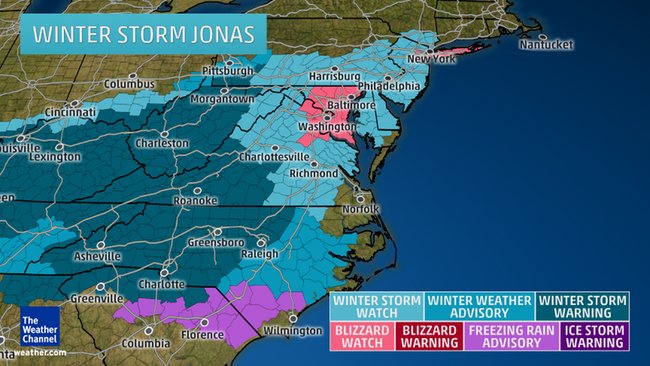 Some of the forecasts for snowfall depth are extreme, with areas expected to face 20 inches or greater likely at greatest risk of higher insurance losses, due to the tendency for roof damage to properties. 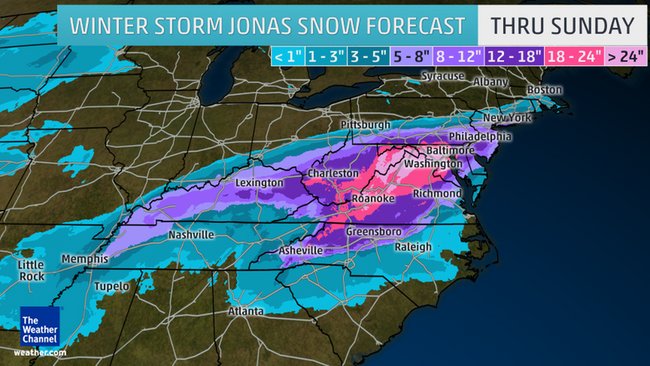 Winter storm Jonas will be more damaging than just a severe snow and ice event however, with the deep low pressure expected to hug the coast bringing high waves and the potential for a storm surge (perhaps more accurately a storm tide) which could coincide with some of the full moon’s highest tides of the year.

The strong winds from Jonas when the storm center moves off the U.S. East Coast could drive coastal inundations for any low-lying areas, causing flooding. The tides are forecast to be higher than normal anyway, due to the phase of the moon, making any additional surge due to Jonas’ low pressure and onshore winds a real threat. 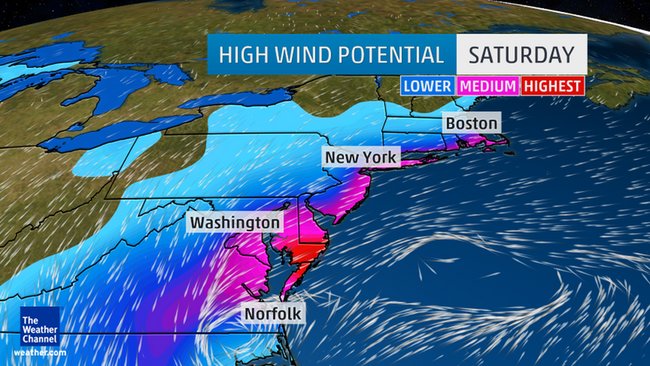 A storm surge graphic for winter storm Jonas can be found below:

It isn’t just snow https://t.co/tlRZtlaMmo This weekend’s storm could make it into the coastal flood record books pic.twitter.com/Karhe1zC6W

The Weather Channel explains the potential impacts from winter storm Jonas as:

There remains some uncertainty regarding coastal flood impacts, as, once again, the exact track and forward speed of the low-pressure center will dictate wind direction, wind duration and the length of the wind flow over water, or fetch, all components to determining the amount of coastal surge flooding and battering waves atop the surge.

With a full moon this weekend, tides will already be running high, which could worsen coastal flooding impacts, as strong winds drive onshore during multiple tide cycles.

Areas of particular concern according to the National Weather Service include:

In these areas, major coastal flooding is possible for both Saturday morning and Saturday evening high tides, with potential beach erosion and even property damage.

Other areas with a chance of moderate coastal flooding include the west end of Long Island Sound, the south shore of Massachusetts, Cape Cod, Martha’s Vineyard and Nantucket Island.

So this winter storm is definitely one to watch and has the potential to result in a reasonably large insurance industry loss, should the effects be as bad as the current forecasts suggest.