PERILS AG, the provider of industry loss data and triggers, has increased its estimate of the impact to the insurance and reinsurance industry from European windstorm (extratropical cyclone) Zeus, which struck France in March 2017 by another 6% to EUR 284 million.

Now the catastrophe loss from Zeus has risen again, as PERILS has aggregated more data from exposed insurers, resulting in the 6% increase at the third reporting juncture to EUR 284 million (approx. US$340m).

Zeus struck France as one of a series of extratropical low-pressure systems that tracked across the British Isles and Northern Europe. Zeus became embedded in a strong jet stream which took the windstorm rapidly across northern France and into northern Italy during the 6th and 7th March 2017.

The highest wind gust value recorded during extratropical cyclone Zeus, of 193km/h, was recorded in Camaret-sur-Mer in Brittany, France. In south-eastern France, gusts of 185 km/h and 157km/h were measured in St Raphael on the Côte d’Azur and Ajaccio in Corsica respectively.

He also said; “The market loss footprint for Zeus has been produced by collecting detailed loss data from affected insurance companies. The preparation of this data requires considerable work on the part of these companies. We are extremely grateful for their continued support and remain committed to returning value in the form of high-quality industry data.”

PERILS also made available a new detailed loss footprint for Zeus, offering new data points on the damage to insured property caused by windstorms in France and a new benchmark that can be used for the calibration of existing risk models (see below). 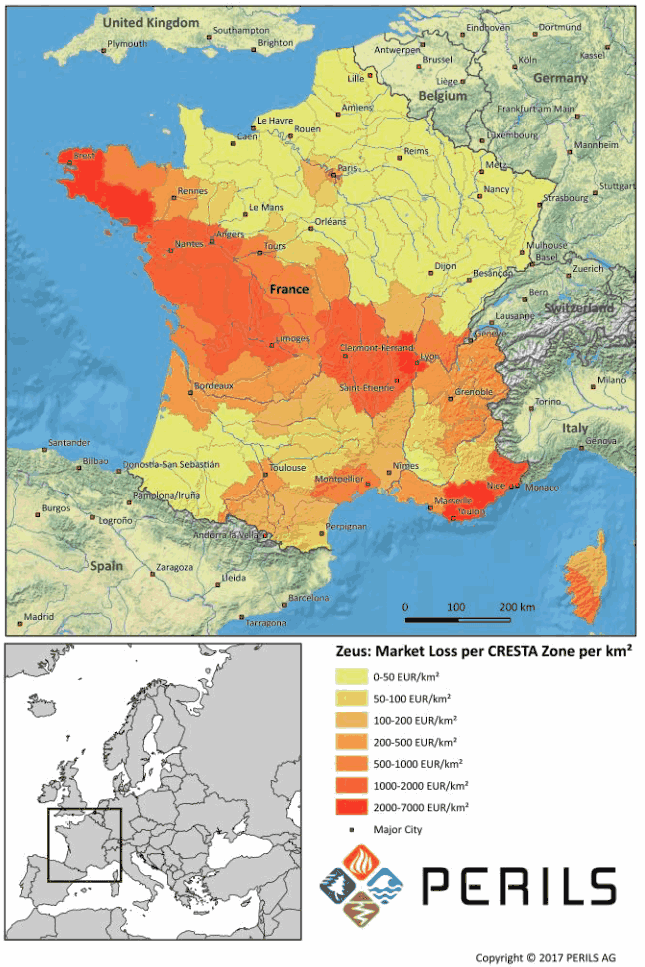