The fourth and final insurance industry loss estimate for European windstorms Mike & Niklas has been released this morning by PERILS AG and it sees the total reduced again to €816m, now 4% lower than the initial loss estimate.

European windstorms Mike-Niklas have clearly been difficult events to estimate the insurance, potentially reinsurance, industry losses for. The figures released by Zurich-based PERILS AG, a provider of industry-wide European catastrophe exposure, industry loss data and indices, have fluctuated as new information became available, resulting in a final industry loss estimate which is below the first.

PERILS’ initial estimate for insured property market losses from Mike-Niklas was €853m (approx $952m or £618m), published in May. The second loss estimate, released in June, was a figure 5% higher at €895m. That was followed by a third loss estimate in September, which saw the total reduced to below the initial estimate at €826m.

Now, the fourth and final industry loss estimate for Mike-Niklas has been pegged at €816m (approx. $915m), which is just over 4% below the initial estimate and almost 9% below the higher second estimate.

Windstorms Mike-Niklaus were reported on together, due to the proximity of time in which they occurred and the resulting difficulty to separate losses from each of them. This likely has a bearing on the fluctuating insurance industry loss estimates.

The storms caused significant damage across Western and Central Europe, with the majority of the impact felt in Germany, between 29th March and 1st April 2015. Niklas, also known as Lentestorm in the Netherlands, was the strongest of the two storms.

The overall loss makes Mike-Niklas the biggest insurance industry hit from a European windstorm in Germany since 2007. The storms did not have a major impact on the reinsurance sector, with the majority of losses retained by primary companies given the spread of losses across Germany.

This final loss estimate is issued exactly a year after the event occurred and is available in full resolution, by CRESTA zone and by the property insurance sub-lines Residential, Commercial, Industrial and Agricultural.

PERILS notes that the data its market exposure sums insured and gust speed information from the storms can be used to facilitate market benchmarking activities and to calibrate European wind risk models, which it notes could be of particular benefit to the German market with Mike-Niklas given the majority of the insured losses occurred there and virtually no regions of the country remained loss-free. 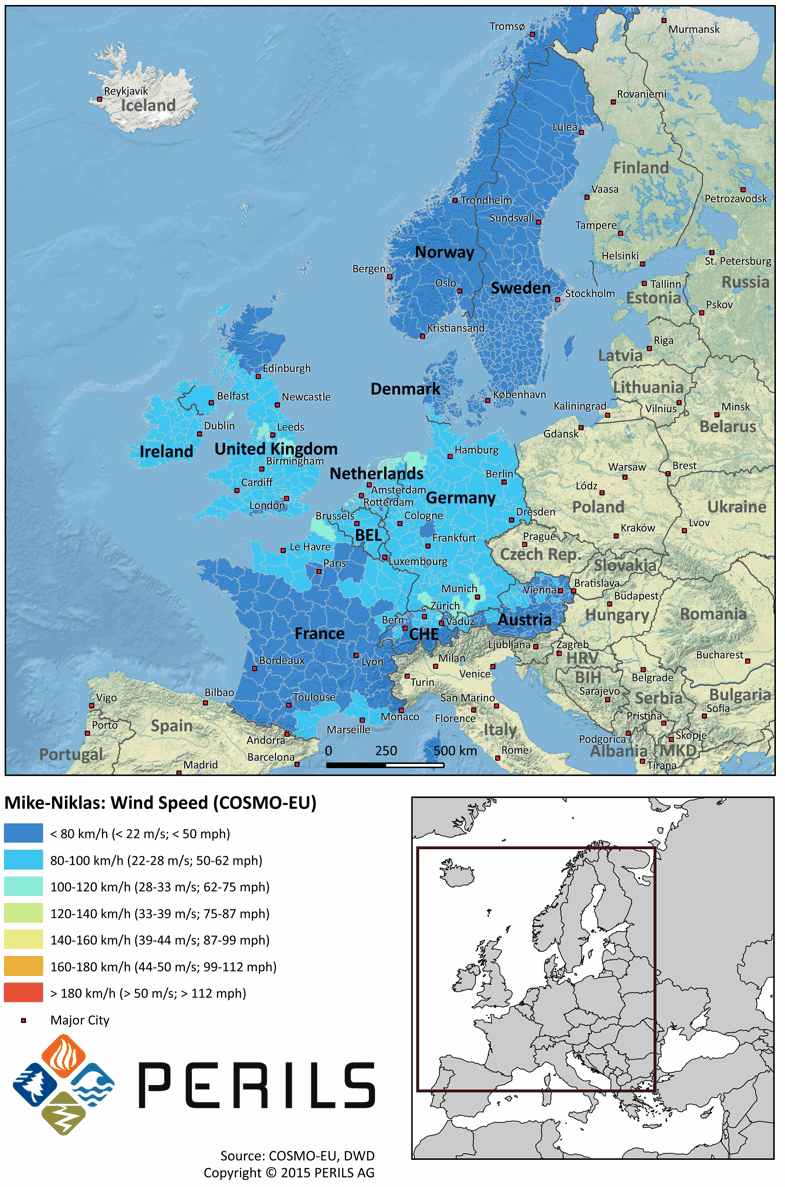