Renewable energy risk analysis firm 3TIER® have published a wind performance map for the whole of 2011 which shows that generally wind speeds across the U.S. were above average across the year. Some regions saw wind speeds well above normal, as much as 15%, while others saw wind speeds -5% below their norm.
The map and 3Tier’s services help renewables companies, such as wind power firms, understand how wind speed affects their performance. The map is also a powerful visual display which shows that hedging wind speeds with insurance or derivatives could be beneficial to certain industries.

It clearly shows that there is a lot of annual variation in wind speeds and this affects the performance of any wind powered electricity generation plant. The wind power industry can hedge these risks with weather derivative type products and given the variation in wind speeds the map shows, it looks like 2011 would have been a good year to have a weather hedge in place.

With wind speed being such an easily measurable and indexable weather feature we’re surprised that wind derivatives haven’t become more widely used. Perhaps more research needs to be done into the way wind variation affects other industries outside of wind power to see if hedging would benefit other sectors. 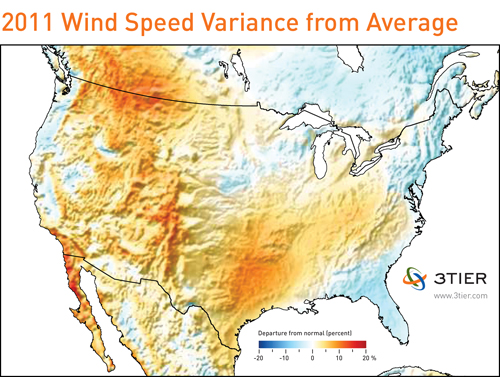