Analysis from Property Claim Services (PCS), a Verisk Analytics company, reveals that the use of PCS data in 2017 catastrophe bond issuance increased by 77% to $5.3 billion when compared with the previous year, as total issuance broke records.

Excluding cat bond lite transactions, private cat bonds, and transactions focused on lines outside of property, PCS’ latest market report puts full-year 2017 catastrophe bond issuance at $10.5 billion, which is the first time in the market’s history the $10 billion issuance threshold has been breached in a single year.

It’s worth noting that according to data from the Artemis Deal Directory and as shown in the Q4 2017 Artemis catastrophe bond and insurance-linked securities (ILS) report, which includes non-property focused deals and private, or cat bond lite deals, issuance in 2017 actually hit roughly $12.6 billion.

Of the $10.5 billion of yearly issuance recorded by PCS, $5.3 billion, or 50.4% used PCS data which amounts to 15 of the 36 transactions issued in the year. This is compared with $3 billion of 2016 issuance using PCS data, which came from 11 transactions.

The transactions sought a range of reinsurance and retrocessional reinsurance coverage for their sponsors.

Seven catastrophe bonds issued in the year came from first-time sponsors, and PCS notes that three of these used PCS data: one for independent catastrophe definition for a reinsurance transaction and two in industry loss index triggers for retro coverage.

PCS’ new report explains that up until the end of August, the marketplace was eager to discuss innovation and the expansion of the ILS and cat bond space into new business lines and regions. However, after the impacts of hurricanes Harvey, Irma and Maria, innovation took a back seat as the market focused on its first major test.

“And while we do need to work through the major events that occurred in the third and fourth quarters last year, we should try to maintain a balance that includes fueling new solutions that bring original risk into the market. Sooner or later, the market will soften again, and if we don’t invest for that eventuality, the market will have no choice but to endure the slipping rates and looser terms that tend to prove problematic in the long run,” explains PCS.

PCS also notes that two cat bond lite deals came to market in the final quarter of the year, which took the number of cat bond lites issued in 2017 to 15.

Looking at Artemis’ data and charts on the catastrophe bond market, at the end of 2017 the industry loss index trigger (which is predominantly a PCS trigger due to the volume of U.S. transactions) accounted for almost 27% or $8.3 billion of cat bond risk capital oustanding. 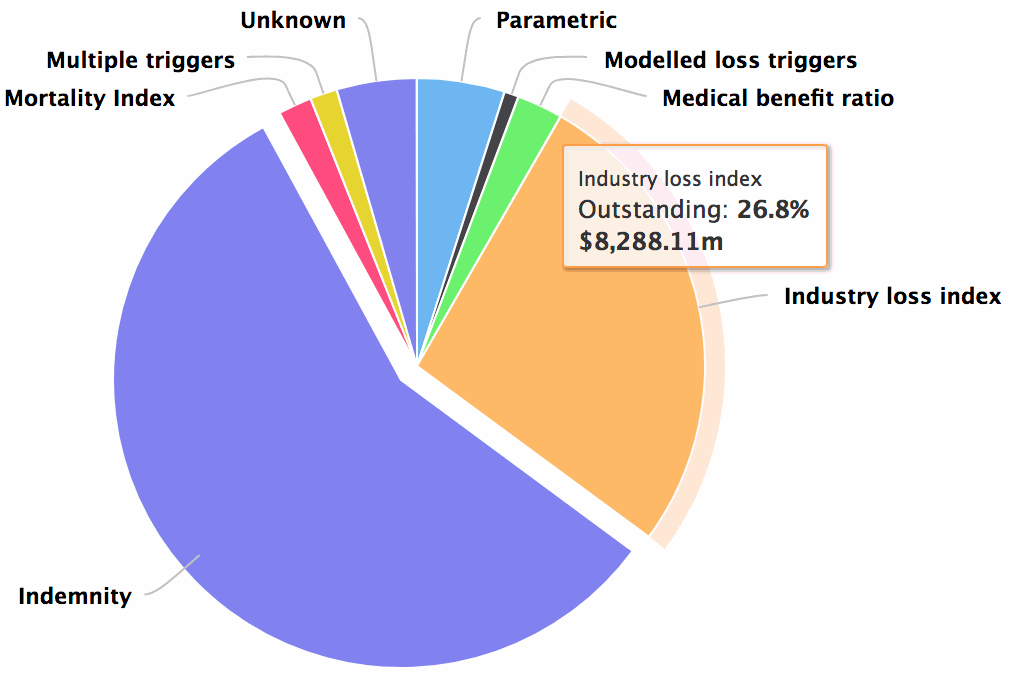