US wildfires no longer a secondary peril, says Chaucer

Specialty insurance and reinsurance group Chaucer, owned by leading Chinese reinsurer China Re, has studied the incidence of wildfires in the United States and concluded that it is time wildfire was considered a primary peril by the industry.

As wildfires rage across the United States western states and into Canada still, with some of the largest fires in history burning in California and with a period of heat and dry conditions forecast, the warning is a timely one from Chaucer.

It’s also timely given the publishing of the IPCC climate report today, which provides a stark warning on the potential impacts should climate change continue to run unchecked.

Chaucer has analysed wildfire activity in the United States and found that the average number of major wildfires (over 40,000 acres) per year has risen 30% over the last 15 years, from an average of 32.4 a year to now 41 a year. 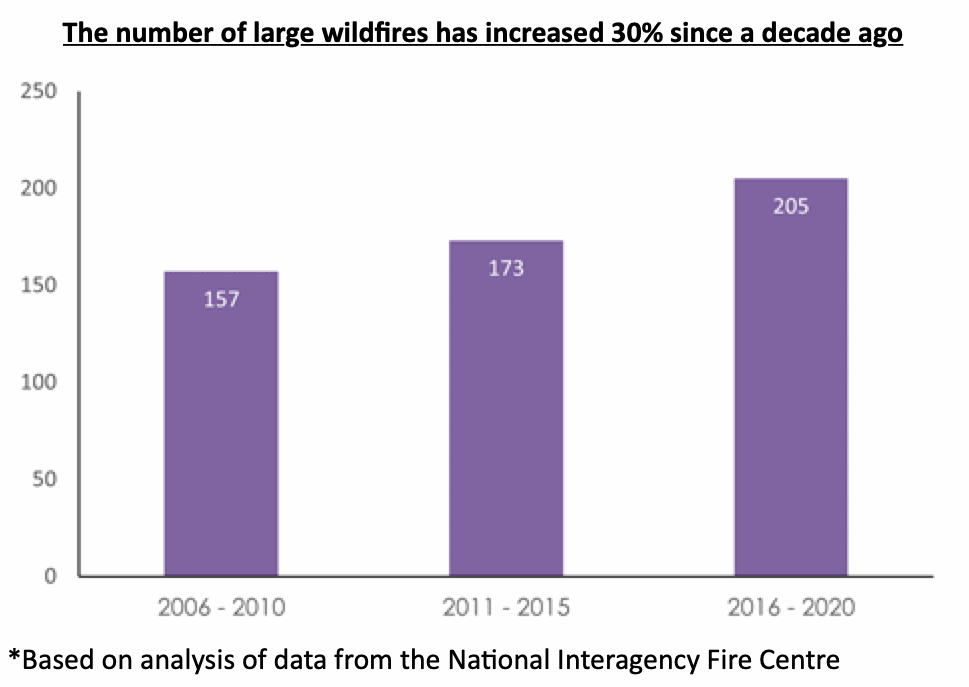 On top of the increasing frequency of wildfire outbreaks in the US, Chaucer explains that, “Wildfires are causing more financial losses and pose a bigger risk to property as humans extend building into the Wildland Urban Interface.”

Noting the role of climate change, Chaucer said, “The risk of wildfire damage is increasing in part due to higher temperatures and shifting rainfall pattern causing more drought conditions, which is linked to the effects of climate change. A pattern of dryer Springs and Autumns may have extended the duration of the wildfire season. Forest density has also increased, providing more fuel for the fires.”

With increasing risk and increasing value of claims, Chaucer says that this is putting upward pressure on insurance premiums.

As wildfires have shifted to becoming a primary peril of focus for the insurance and reinsurance industry only recently, the industries risk modelling is still catching up.

“The science and modelling of this risk is much less mature when compared to some other perils, such as hurricanes. The methodologies and the assumptions used to forecast the probabilities and severities of wildfires still vary substantially – leading to quite different prices for insuring this risk,” Chaucer explained.

However, the risk modelling is catching up Chaucer believes, which will help the industry better understand and price for this exposure of growing importance.

Wildfires are an increasing peril of note in insurance-linked securities (ILS) markets as well, particularly since the losses from wildfires in the 2017 and 2018 seasons.

Since then, aggregate reinsurance capacity exposed to wildfires has been pared back somewhat in the ILS market, while more per-occurrence structures and some parametric structures are increasingly the norm.

In addition, we’ve seen continued slow, but steady activity in the catastrophe bond market related to wildfire risks in recent years, suggesting that capacity can be available at the right price.

Ellen Gyandzhuntseva, Head of Exposure Management at Chaucer commented on the firm’s findings, “Calculating the risk of wildfires is of key importance to the industry. The complexity of the peril is particularly challenging given how many shifting factors there are to consider.”

“We’ve undertaken a thorough review of our own internal modelling practices for wildfires and put together a framework for determining our own view of risk and managing our risk appetite for this peril.”

“The respective approaches to modelling wildfire risk vary across the industry, leading to different views of what technical rates should be charged to insure this peril. With the severity and frequency of wildfires increasing together with social alertness to their risk mitigation, the challenge for insurers is to get comfortable that their models are suitably updated to reflect this trend in order to avoid being caught out by the peril.

“The consensus is that this threat is only going to continue to grow.”