According to the latest data from the U.S. National Oceanic and Atmospheric Administration (NOAA), there has already been an “unprecedented” 18 billion dollar weather and climate disasters in the United States during the first-nine months of 2021.

Scientists at NOAA’s National Centers for Environmental Information said that four of the billion dollar weather and climate disasters occurred in September 2021, which was the fifth-warmest September in the 127-year climate record.

The 18 weather and climate related disasters that each cost the US economy more than a billion dollars each consist of, nine severe storm events, four tropical cyclones including hurricanes Ida and Nicholas in September, two flooding events, one combined drought and heat wave event, one wildfire event, and one combined winter storm and cold wave (winter storm Uri and the Texas freeze). 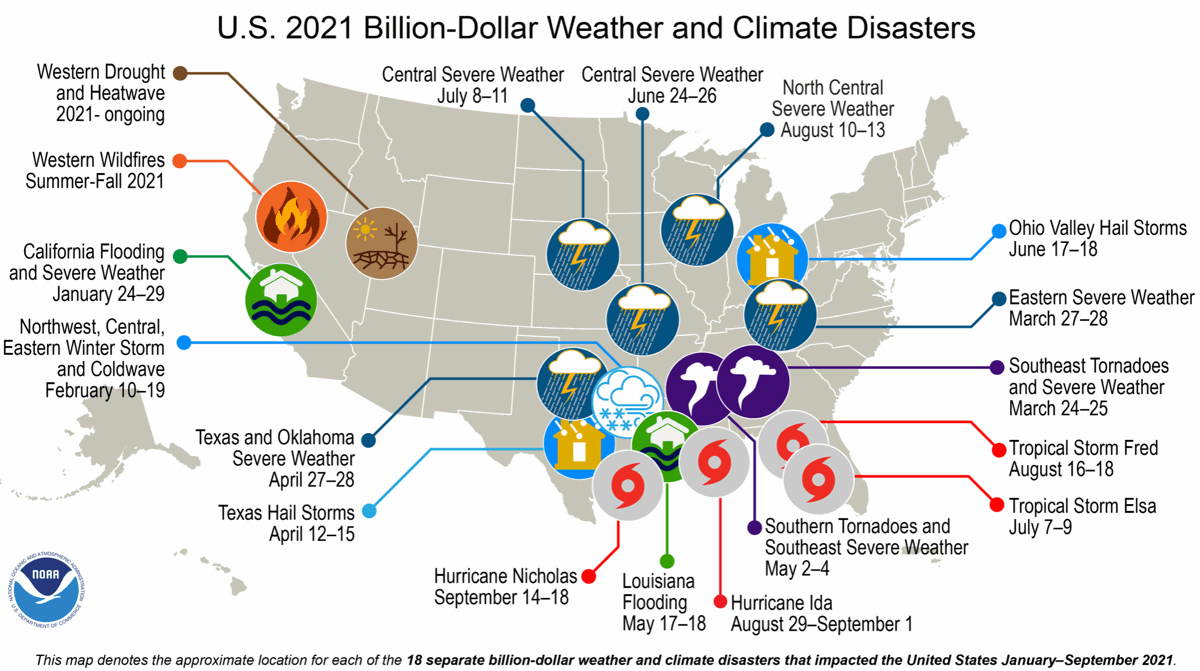 Of note for the insurance, reinsurance and insurance-linked securities (ILS) markets, NOAA estimates that so far in 2021 the dollar value of property losses and infrastructure damage has already surpassed the full-year 2020.

Total losses related to property and infrastructure damage reached an estimated $104.8 billion by the end of September 2021, surpassing the $100.2 billion incurred last year (adjusted for 2021 inflation).

Also notable for insurance, reinsurance and ILS market interests, NOAA said that the first nine months of 2021 have seen the highest number of disasters in a calendar year so far, which puts 2021 second behind 2020 at this stage.

2021 is also the record seventh-consecutive year where the United States has experienced 10 or more billion-dollar disasters from weather and climate related events.

Loss of life has also been significant in 2021, with 538 people killed by these disasters, more than twice the number of deaths from all billion-dollar disasters that occurred in 2020, NOAA’s scientists said.

Hurricane Ida is seen as the costliest disaster of 2021 so far, with economic costs expected to well exceed $60 billion, according to NOAA.

With insurance and reinsurance market loss estimates now pointing to an insured loss figure above $30 billion, it looks like roughly half of that toll may be covered by the market.

As a result, on an economic basis, hurricane Ida already ranks in the top five most costly hurricanes, but NOAA warns that losses are likely to continue rising from this event.

On an insured loss basis, it looks like hurricane Ida could also be a top-five loss event, in terms of cost, of course depending on how you aggregate together the losses further north and east from Ida’s remnants and whether you consider this a single event, or two (which some in the market continue to debate).

While the number of billion-dollar events is high in 2021, up to the end of September, the total aggregated economic cost remains far below full-years like 2005 and 2017 at this stage.

But with three months of weather and catastrophe activity still to run, there is time for the total cost to the US economy, and to the insurance, reinsurance or ILS industry, to rise further.