UK might face most severe windstorm of season in Ruth

Weather forecasters are warning that the UK could be facing its most severe European windstorm in decades over the next 24 hours, as a low pressure system named windstorm Ruth, dubbed Charlie by some of the UK media, intensifies as it approaches.

The low pressure system was named Ruth by the Free University of Berlin as it crossed the Atlantic yesterday. The system has been intensifying rapidly and is expected to begin to impact the west coast of Ireland and southwest UK this evening with strong winds and very high waves.

The low pressure system is also being called storm Charlie by some of the UK media and storm Gustav in some other meteorological circles, however Artemis tends towards the FU Berlin naming as that is the one used by PERILS AG and recognised by the major European reinsurance firms. 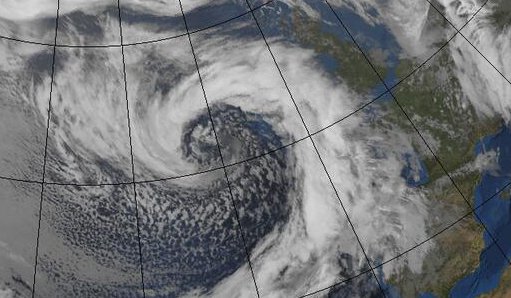 Some forecasters are suggesting that windstorm Ruth could be as bad, or worse, than a 1987 windstorm which impacted much of the UK. Forecasters have suggested that if Ruth continues to intensify the low pressure system could lead to some records for pressure and wind speed being broken.

UK Met Office forecasters say that damaging winds are to be expected which could cause significant disruption, down trees and damage property, as well as heavy rainfall which on already soaking ground could cause additional flooding.

The Free University of Berlin forecasts that windstorm Ruth will have a minimum central pressure of around 945mb by Saturday morning, bringing the strongest winds into Ireland, the southwest UK and southern UK, before Ruth then moves northwards.

Some of the strongest wind gusts of the European windstorm season so far are possible from Ruth (or Charlie) as the tight isobars threaten gusts of as much as 100mph, according to meteorologists. After a series of storms has struck the UK and Europe already this winter, Ruth will not be welcomed by insurers and reinsurers already counting the costs.

For once, the various weather models (GFS, ECMWF, ENS etc.) all appear to be in agreement on the severity of storm Ruth and it seems certain to be one of the worst, if not the worst European windstorm to strike the UK this winter season. Some forecasters are suggesting that Ruth could be a more severe storm than the 1987 storm, often called a hurricane, which caused extensive damage across the southern UK.

With losses mounting from the European windstorm season there currently does not appear to be any let up from the conveyor belt that is bringing low pressure systems across the Atlantic towards the UK and Europe. At this time there has been no impact to catastrophe bonds which cover European windstorm risks, but on a cumulative basis insured losses are mounting and if the recent weather continues any cat bonds covering European windstorm on an aggregate basis could begin to look risky.

If windstorm Ruth has a major impact on the UK Artemis will provide updates over the weekend, either on this page or in a subsequent article.