Estimates of insurance and reinsurance industry losses from the recent UK flooding caused by storms Desmond and Eva are rising, with KPMG suggesting re/insurers should expect a £1.5 billion ($2.23 billion) hit. 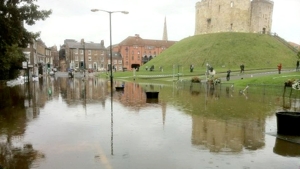 At the same time as estimates rise the calls are beginning to come in for the UK flood reinsurance facility, Flood Re, to be expanded to assist some of those hardest hit and who struggle to get insurance protection.

PwC was the first to put an insurance industry loss estimate on the UK flooding, suggesting around £1 billion ($1.5 billion) of the economic loss could fall on insurers and perhaps their reinsurers to pay for.

Now, fellow accounting and consulting firm KPMG has upped the ante, suggesting that the total cost to the UK, from an economic and insured perspective, could be as high as between £5 billion to £5.8 billion, so as much as $8.6 billion.

Of that huge total, which includes the costs to the government from deploying emergency services, flood barriers and the army, KPMG said that as much as £1.5 billion would likely fall to insurance claims. However, KPMG also noted that there would likely be another £1 billion of cost that will fall on residents and businesses due to inadequate levels of insurance protection.

Justin Balcombe, KPMG’s UK head of insurance consulting, explained; “In 2007 when a similar pattern of flooding hit, total insured claims were £3.2bn, however, we consider that the actual financial impact far exceeded this. We are assessing this month’s events through a number of economic lenses, resulting in an initial total cost estimate of £5-£5.8bn.”

And so the calls come in for the government, as well as the insurance and reinsurance industry, to ensure that Flood Re is sufficiently large and all-encompassing to enable insurance to be provided to more homes and businesses.

Flood Re, a not for profit risk pooling and reinsurance facility established to enable insurers to provide more cover, targets higher risk domestic properties with the goal of helping to ensure coverage is more affordable.

Flood Re does not include businesses and in fact typically businesses can obtain coverage in the open insurance market. However, some of the smaller businesses which are worst affected by events like the recent flooding can struggle to afford insurance, making recovery impossible.

It’s clear that the availability of keenly priced reinsurance coverage is key to making flood insurance affordable and available across the UK. However issues of how to deal with property situated in clearly at-risk flood zones remains, with insurers and reinsurers averse to having to take on risks that if priced at risk-commensurate levels would be unaffordable to sustain.

The problem of property which has been in flood zones for sometimes centuries, with a changing climate, severe storms, torrential rain and flooding all seemingly increasing the risk exposure, is a difficult one.

Neither the insurance or reinsurance industry wants to take on risks that it cannot price adequately. Achieving risk commensurate pricing on catastrophe and weather exposed risks is key as the climate fluctuates and storms are widely thought to becoming more frequent and severe.

However, reinsurance capacity is plentiful and as cheap as it has ever been, making now an ideal time to see just how far a facility like Flood Re can be expanded. The reinsurance and insurance-linked securities (ILS) community have ample capacity and capital to put to work, at least on the risk levels that the industry feels are safe to deploy capital on.

If Flood Re can be adjusted to make the most of reinsurer and ILS fund manager interest, then at least the government will have the strongest private capital backstop that is possible, perhaps enabling it to step in and protect properties where the re/insurance industry finds the risks too great.

By mobilising as much of the interested capital from third-party investors, either through creation of a UK flood catastrophe bond or collateralised reinsurance participation in Flood Re’s retrocession program, the cost-of-capital may be brought down.

Add to that the depth of traditional reinsurance capital at the moment, whose capacity is as plentiful and cheap as it has ever been, and it does seem that if the desire to expand Flood Re’s remit is there, something could be done.

Ultimately though, the appetite of insurers to actually underwrite the flood risks of the highest risk properties will hold back the ability of some to become insured, that will not change no matter how much reinsurance capital is made available. At some point the government will have to step in if these most at-risk properties are to remain covered affordably.

We’ll update you as new estimates of losses from the UK flooding emerge. With storm Frank due to bring further torrential rain to areas of the UK later today (Tuesday) and tomorrow, the worst is not yet over and with saturated ground it seems likely that further flooding will be seen, extending the final loss tally for insurers and reinsurers to address.

The recent outbreaks of severe weather in the U.S., which has featured severe thunderstorms, tornadoes, heavy snow, ice and flooding,...