U.S. winter storm to be a “multi-billion-dollar” weather event: Aon

The severe winter storm and historic blizzard that struck the U.S. east this weekend is expected to be the first weather event of 2016 to result in an economic loss of over $1 billion, and is likely to be a multi-billion dollar event, according to Impact Forecasting. 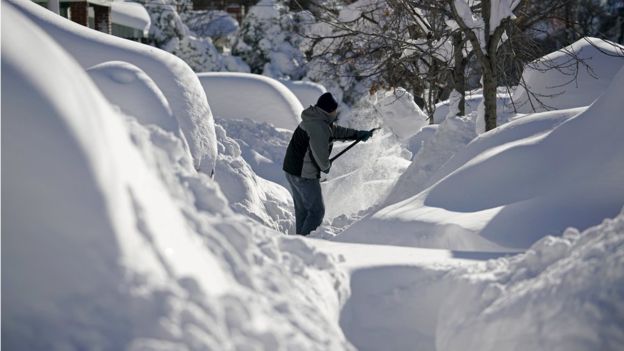 The catastrophe risk modelling team of reinsurance broker Aon Benfield gave an early assessment of the impacts of the winter storm, blizzard and coastal flooding suffered in the U.S. east this weekend.

While it is “too early to provide a specific economic or insured loss estimate” Impact Forecasting said that the “substantial damage and level of business interruption” means that “it is anticipated that this will be the first billion-dollar weather event of 2016 for the United States.”

The U.S. National Weather Service said that it expected the damage to top one billion dollars, but Impact Forecasting expects that this will result in a significantly higher economic cost.

“Given the physical damage to homes, businesses and other structures and automobiles, plus the high costs incurred due to business interruption, it is expected that this will end up being a multi-billion-dollar economic cost,” the cat modelling unit wrote in its update.

It’s too early to estimate at insurance and reinsurance industry loss from this winter storm, but there is every chance of this being in the high hundreds of millions, most sources suggest. Whether it could top one billion in insurance industry losses remains to be seen, but similar weather events in previous years have come close.

Impact Forecasting said that for the insurance industry, the complexity of the weather event, which caused damage from snow, ice, wind, coastal flooding, tornadoes, and hail as well, means that assessments will take time.

However, Impact Forecasting explains that this weekends winter storm was similar to the January 5-10, 1996 event which struck the Northeast, Mid-Atlantic and parts of the Midwest U.S. That storm is estimated to have resulted in an economic loss of $4.6 billion and an insured loss of $920 million, in today’s dollars.

The full update on the winter storm from Impact Forecasting can be found below:

Overview
A historic winter storm brought prodigious snowfall, high winds, coastal flooding, freezing rain, ice, sleet, and severe thunderstorms to the Eastern United States from January 21-24, killing at least 29 people and injuring dozens of others. States of emergency were declared in Washington, D.C., Virginia, Maryland, Pennsylvania, New York, New Jersey, Tennessee, Kentucky, Delaware, West Virginia, Georgia, and North Carolina as the storm’s impacts led to widespread damage and substantial disruption to travel throughout the country. Reports from state officials indicated that most of the incurred damage was due to fallen trees, burst pipes, coastal flooding, hail and wind across parts of the Mid-Atlantic, Southeast, and Northeast. Official weather stations in New York City, Washington, D.C., Baltimore, and Newark noted their highest event snowfall totals on record. This will likely end up rated as one of the top 15 winter storms in the Northeast and Mid-Atlantic since 1900.

Meteorological Recap
The first indication of a potential major winter storm came on January 17, as two of the most dependable forecast computer models (ECMWF and GFS) started to suggest that an area of low pressure would develop across the U.S. Plains and undergo explosive intensification between January 22-24. Later on January 18-19, the rest of the forecast models reached near-unanimous consensus that the strongest winter storm of the season would bring some of the heaviest snow totals ever recorded for parts of the Mid-Atlantic in addition to very gusty winds and coastal flooding. To have such model consistency at a long lead time was a strong victory for the weather forecasting models.

The primary batch of energy that helped eventually spawn the winter storm first came ashore along the U.S. Pacific coast on January 19 in California. The trough of low pressure would quickly track eastward through the Intermountain West and the Rockies. By January 21, a new area of low pressure developed in central Texas and intensified while being fueled by plentiful moisture from the Gulf of Mexico and highly conducive conditions at the mid- and upper levels of the atmosphere. Ahead of the leading cold front, severe thunderstorms were recorded along the Gulf Coast. On January 22, a deep dip in the jet stream was initiated by a quickly developing upper level area of low pressure. The presence of this low would lead to the development of a secondary – and primary – low pressure area that would be the basis for the snowfall, high winds and coastal flooding in the Mid-Atlantic and Northeast.

As the day progressed, this upper low eventually “stacked” on top of the surface low while over the anomalously warm Atlantic Ocean waters and allowed a plume of moisture to traverse towards a drier and colder air mass that was ideal for heavy snow, freezing rain, sleet and ice from the Georgia and the Carolinas and through Central Appalachia and the Mid-Atlantic.

With a strong ridge of high pressure established between northeast Canada and Greenland, this prevented much northward motion of the storm system on January 23 – which largely spared the majority of New England. However, the slow motion of the storm allowed for nearly 48 straight hours of very heavy snowfall that exceeded 2.0 inches (5.1 centimeters) per hour that included Washington, D.C., Baltimore, Philadelphia, and New York City. During the day on January 23, the main area of low pressure saw explosive intensification primarily due to baroclinic forcing. This means that the storm strengthened due to sharp temperature and moisture differences (or gradients) across a relatively short distance.

The tight pressure gradient that established between the main area of low pressure and strong Canadian ridge of high pressure helped result in extremely high wind gusts – nearing hurricane-force in some areas – and also allowed for an onshore flow directed towards the Maryland, Delaware and New Jersey coastline. This resulted in significant storm surge and coastal flooding. Given the slow motion of the storm system, coastal flooding occurred over three separate high tides.

By late on January 23 into January 24, the main area of low pressure began to traverse north-northwestward into the open waters of the Atlantic Ocean. The heavy snowfall, high winds and coastal flooding started to gradually subside before the event finally came to an end during the early morning hours on January 24.

Regional Snowfall Index (RSI)
The Regional Snowfall Index (RSI) is a product from NOAA’s National Centers for Environmental Information (NCEI) – formerly known as the National Climatic Data Center – that is used to measure the impact of significant snowstorms. The index scale has five categories: Category 1 (Notable), Category 2 (Significant), Category 3 (Major), Category 4 (Crippling), and Category 5 (Extreme). It differs from the Fujita Scale for tornadoes or the Saffir-Simpson Scale for hurricanes since it takes into account the special extent of a storm, the amount of snowfall, and the juxtaposition of these elements on the impacted population. It is the only currently used scale that ties a storm’s impacts with the societal disruptions. The NCEI notes that RSI is important since it can help place snowstorms and their societal impacts into a historical perspective on a regional scale.

The RSI is an evolution of the Northeast Snowfall Impact Scale (NESIS), which was developed by Paul Kocin and Louis Uccellini which began being produced operationally in 2005.

There have only been 13 winter storms in the Northeast and Mid-Atlantic that have been rated either Category 4 or 5 since 1900. It is expected that the January 22-24, 2016 snowstorm will become the 14th such event.

Per the National Weather Service, as many as 85 million people in the United States were impacted by the winter storm, including 33 million people under blizzard warnings. All public transportation was shut down on Saturday, January 23 in Philadelphia, Baltimore and Washington, D.C. The storm also led to an entire halt to flights at many of the busiest U.S. airports: Philadelphia, Washington Dulles, Washington National, Newark Liberty, New York City’s JFK, New York City’s LaGuardia, Baltimore/Washington International, and Charlotte. In total, more than 13,800 flights were cancelled between January 22-25 that led to a domino effect across the United States and internationally. The breakout of cancellations as per FlightAware included January 22 (3,689); January 23 (5,237); January 24 (3,929); January 25 (980 – tentative). In Virginia alone, there were 989 traffic accidents and 800 disabled vehicles due to the heavy snow. Eleven states declared states of emergency as governors and local officials urged residents to stay off the roadways. Several states initiated mandatory travel bans given dangerous driving conditions due to heavy and blowing snow.

Damage reports from several states in the Mid-Atlantic and Northeast indicated that many roofs of homes and businesses either partially or completely collapsed under the weight of the heavy snow and ice. Additional damage was incurred after trees fell. In many instances, homeowners and business owners may not recognize that structural damage has occurred until the snow begins to melt. Thousands of members of the National Guard were deployed to help in the recovery process. In New York City, the mayor recruited laborers to shovel snow for USD13.50 per hour to help the city get back to normal operation in time for the start of the workweek on January 26.

Coastal Flooding
Beyond the record-setting snowfall, the powerful onshore wind flow from the main area of low pressure led to moderate to major coastal flooding from North Carolina to Maine. Coastal flood warnings were issued by the NWS. The hardest-hit areas included parts of Delaware and New Jersey, where the combination of three consecutive high tides on January 23 and 24, plus the pull of a full moon caused considerable flood damage. Record high levels of water were noted at three separate points in New Jersey: Delaware Bay at Cape May; Cape May Harbor at Cape May; and Great Channel at Stone River. Floodwaters in Lewes, Delaware also rose to a record 9.27 feet (2.83 meters). In many instances, tides were running 3.0 to 4.0 feet (0.9 to 1.2 meters) above normal levels.

The storm surge and pounding waves caused considerable water damage to homes, businesses, beaches and coastal infrastructure. In many instances, there were large chunks of ice floating in the floodwaters. Some of the hardest-hit New Jersey communities included Ocean City, Atlantic City, Sea Bright, Long Beach, Hazlet, Sea Isle City, and Manasquan. Local officials in some areas cited that the flooding was nearly as significant as sustained during Hurricane Sandy in 2012. In Delaware, particular damage was reported at the north end of the Rehoboth Beach boardwalk. Nearby dunes were also washed away.

Severe Thunderstorms
During the initial stages of the winter storm, powerful thunderstorms developed across the Gulf Coast ahead of the leading cold front. The Storm Prediction Center and National Weather Service confirmed at least four tornado touchdowns in Mississippi that damaged dozens of homes. One particularly EF2 tornado touched down in Lamar County, while separate tornadoes rated EF1, EF1, and EF0 were recorded in Simpson and Copiah counties. In addition to the tornadoes, up to golf ball-sized hail and winds gusting to 73 mph (117 kph) were noted in parts of Florida, Mississippi, Louisiana, and Alabama.